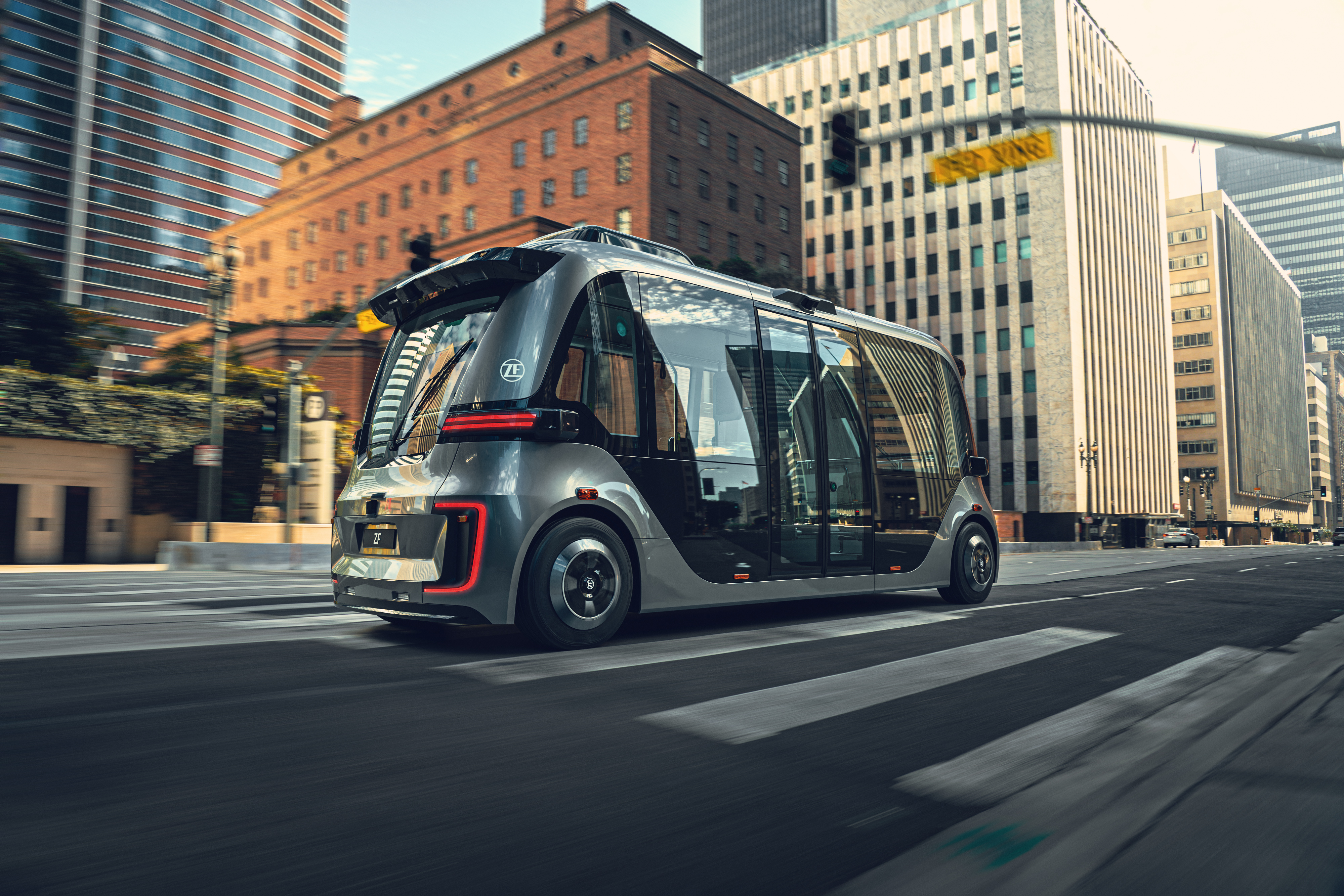 Beep, which describes itself as an autonomous mobility-as-a-service company, will implement ZF’s next-generation, Level 4 autonomous shuttle, which the company also launched at CES today. Level 4 autonomy means the vehicle can drive itself without requiring the human to take over in most situations, as long as it’s within the vehicle’s operational design domain. ZF’s new shuttle, which will be built in partnership with AV software company Oxbotica, is designed for urban environments and mixed traffic, ZF said. ZF’s previous shuttle model only drives in designated lanes. Those shuttles are currently deployed via ZF’s subsidiary 2getthere in Rottderdam and Masdar City, and ZF says it has clocked a total of 62 million autonomously driven kilometers in real traffic with more than 14 million passengers. The new shuttle will implement other new technology that ZF unveiled in Las Vegas, including its ZF ProConnect connectivity platform, which enables communications with surrounding infrastructure and the cloud, and the ZF ProAI supercomputer, a device that can support advanced driver assistance systems (ADAS), infotainment and chassis functions. Those two platforms work together to enable ZF’s virtual driver, the company’s proprietary autonomous driving software stack. The rise of electric vehicles has resulted in increased communication within the vehicle; everything from opening and closing windows to automated driving features to infotainment to passenger comfort is controlled via computers. Instead of piling electronic control units (ECU) — which historically have handled one function at a time — on top of each other, suppliers are converging them into so-called supercomputers. ZF’s Pro AI supercomputer combines multiple systems-on-a-chip (SoC) from different suppliers into one hardware unit that’s more efficient, takes up less space (the new ProAI is 12x6x6 inches) and eases supply constraints. 1_ProAI_4k_Active_Mainboard Nvidia, which is quickly garnering a reputation for handling all things compute in the software-defined vehicle, is seeing the need for a new piece of hardware, as well. The tech giant announced at CES it would work with Foxconn to build ECUs with Nvidia’s Drive platform, including its Orin SoC, effectively creating a supercomputer that can replace what would otherwise be a number of ECUs in a vehicle dedicated to different tasks, such as digital instrument cluster, in-vehicle parking and autonomous driving. To handle so many complex tasks, ZF’s latest version of ProAI’s overall computing power can achieve up to 1,500 TOPS, which is a 50% increase from the company’s previous version. ZF said it has more than 13 million units already ordered and expects further growth in the future, with volume supply scheduled to start in 2024.

2_ZF_Shuttle ZF’s shuttle will be able to carry 22 passengers, with 15 seated, according to ZF. The vehicle is Americans with Disabilities Act-compliant and includes an automatic ramp and wheelchair restraints. The shuttle will initially hit a max speed of 25 miles per hour, and in further development go up to 50 miles per hour, according to ZF. Customers can choose a battery capacity between 50 and 100 kWh, which will be able to cover up to 80 miles in pure electric mode. The agreement between Beep and ZF aims to deliver several thousand shuttles over the next few years, with a market entry for ZF’s next-gen shuttle starting in 2025, and a ramp up of production in mid-2026, according to Torsten Gollewski, executive vice president of autonomous mobility systems at ZF. Neither Beep nor ZF said where they would start deploying ZF’s shuttles, but Beep said It’s evaluating a number of possible sites. “Beep has already been commissioned with concrete routes. We are currently working out the operational scenario. We will comment on this in more detail in due course,” Gollewski told TechCrunch. “Generally, we consider both scenarios for each potential customer depending on the route, as one of the advantages of our shuttle solutions is the ability to operate in mixed traffic as well as in dedicated lanes – depending on the kind of solution needed and the most efficient way of achieving that we can deliver the best option for a community and also link a rural community with surrounding larger cities.” Most of Beep’s current deployments are along specific routes within closed campuses. For example, Beep provides a shuttle service in Lake Nona, Fla., within a 17-square-mile development that connects residential, commercial, retail, recreational and medical services. The company also recently partnered with Peachtree Corners, Ga., a 500-acre technology park, to test shuttles on a dedicated path along a main road connecting the hub. “ZF’s full suite of shuttle services, its U.S. partner network and its automotive-grade vehicle complement our turnkey mobility networks and autonomous services technology platform,” said Joe Moye, Beep’s CEO, in a statement. “This shuttle will allow us to continue to pursue our vision of extending mobility equity and reducing carbon emissions, expanding our use cases while meeting industrial requirements for vehicle service life, performance and safety.” Because ZF is an automotive supplier, the company said it offers Beep and any other future partners servicing and maintenance through its global network of 20,000 workshop partners. In North America, ZF has 3,000 workshop partners. “As a technology leader, ZF sees itself not only as a shuttle supplier, but also as a partner for the entire lifecycle of its shuttles,” said Gollewski. “We offer not just the shuttle, but also services with its autonomous transport system, including fleet management, maintenance, repair and training. Therefore, the partnership also includes a comprehensive service concept to ensure smooth operation and thus maximum uptime of the shuttles.” ces-2023-banner-25 ZF and Beep to launch ‘several thousand’ autonomous shuttles in the US by Rebecca Bellan originally published on TechCrunch