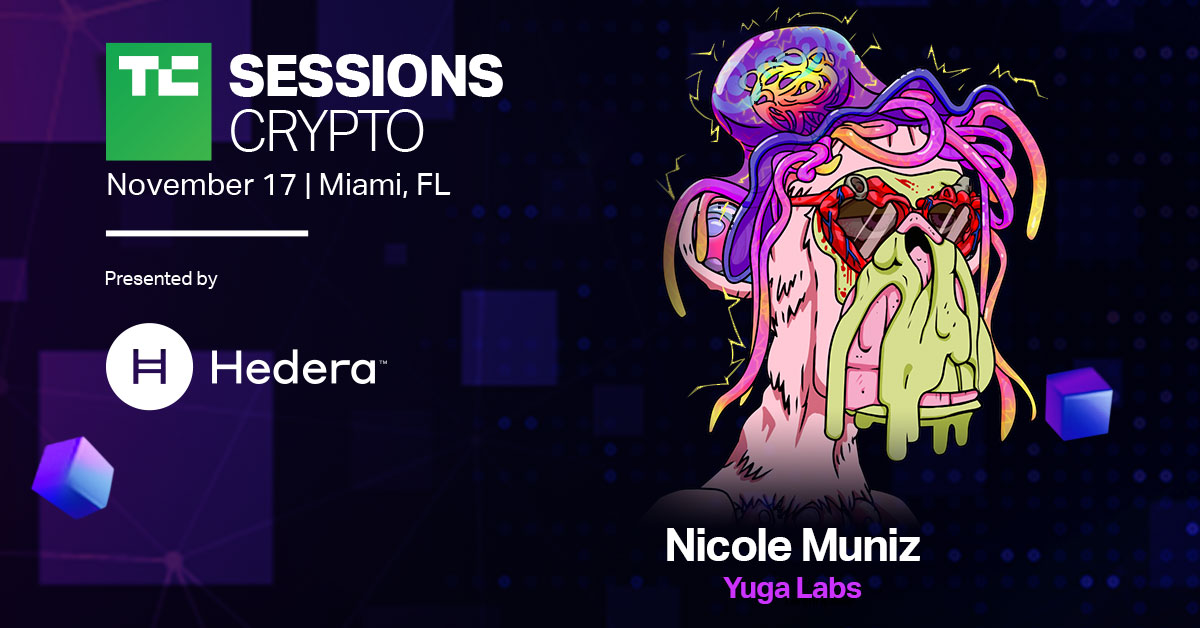 But still, the hype is growing across platforms like Reddit, which saw that millions of crypto wallets were created to mint NFTs or on layer-1 blockchains like Cardano, which hit new all-time highs for NFT volume. NFTs are one of the most talked about topics in crypto, which is why we’re excited to have Nicole Muniz, CEO of Yuga Labs, onstage at TC Sessions: Crypto on November 17 in Miami. Earlier this year, Yuga Labs raised $450 million in a round led by Andreessen Horowitz, hitting a $4 billion valuation. The Miami-based NFT startup is the firm behind Bored Ape Yacht Club and Mutant Ape Yacht Club and that has acquired other popular NFT projects like CryptoPunks and Meebits. It also launched ApeCoin, a token that gathered a multibillion-dollar market cap on its first day of trading that is now around $1.4 billion to date. The company wants to build something that “expands the universe” of Bored Ape Yacht Club but “invites the larger NFT community” in at the same time, TechCrunch previously reported. With all that said, there will be plenty to talk about with Muniz, ranging from the fine-tuned details of Yuga Labs to where her thoughts are for the broader NFT ecosystem and where things stand. We’d like to hear her thoughts on the challenges and opportunities in the NFT marketplace and what areas she sees as most promising when it comes to scaling the ecosystem. Prior to Yuga Labs, Muniz founded an agency called Something New, which has worked with mega-brands like Nike, Google, EA and Square, to name a few. TC Sessions: Crypto takes place on November 17 in Miami. Save $150 with early bird pricing and buy your pass today, and then join the web3, DeFi and NFT communities to keep up with the ever-evolving and always exciting crypto world. Yuga Labs’ Nicole Muniz to talk about NFTs and Bored Apes at TC Sessions: Crypto by Jacquelyn Melinek originally published on TechCrunch