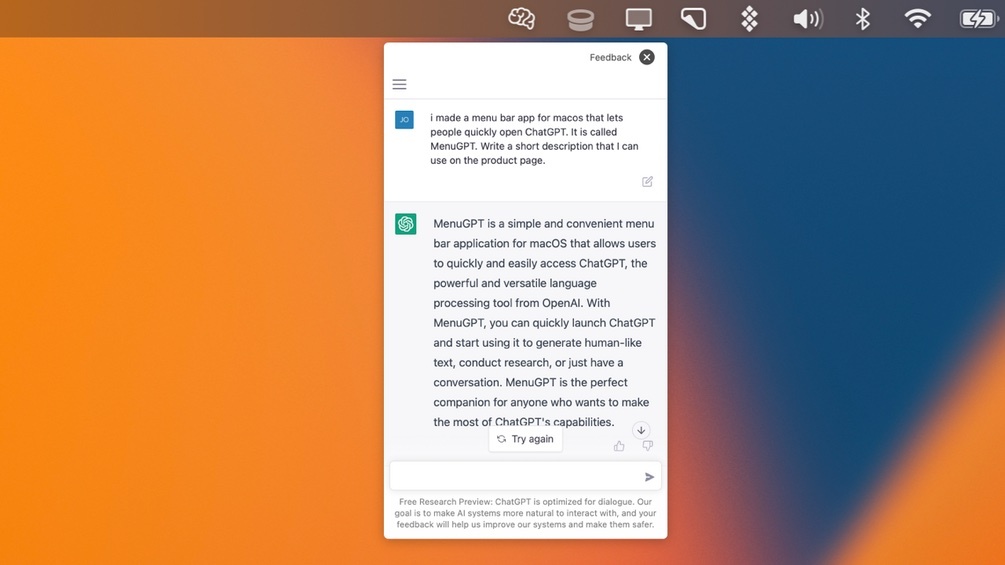 Are you hooked on ChatGPT? Are you, like so many others, testing the limits of what an artificial intelligence can do by giving OpenAI’s chatbot increasingly difficult tasks, only to (well, sometimes) be increasingly amazed at how well it can understand you?If you own a Mac computer, it’s now easier than ever to communicate with ChatGPT, directly from your desktop. Developer Jordi Bruin has launched an app called MenuGPT (via MacGeneration) which adds an icon into the menu bar. When you click it, you’ll get a chat window where you can communicate with ChatGPT without using your browser. It’s also possible to assign a keyboard shortcut for the app, meaning you can launch the ChatGPT window with a simple key combination. Tweet may have been deleted (opens in a new tab) The app has one (pretty serious) drawback: You cannot use it to log into your OpenAI’s account, which is a requirement for interacting with ChatGPT. Instead, you’ll have to log in through your browser, after which you can use MenuGPT to launch the chat window. The app is free, though Bruin does accept donations, which go towards his Christmas tree.

Meanwhile, ChatGPT’s popularity doesn’t show signs of stopping. The chatbot took it less than a week to cross one million users, and people are constantly coming up with new ways to use it. Check out some of our favorite examples.