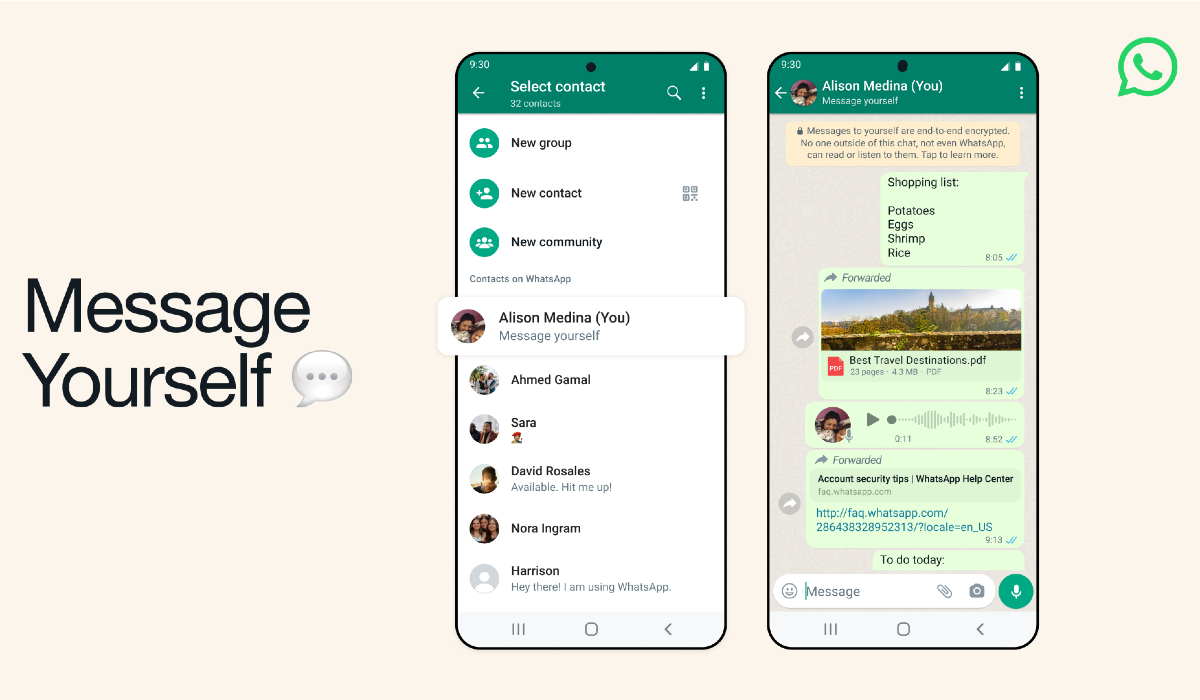 Called ‘Message Yourself’, the feature lets users send notes, reminders and shopping lists to themselves on WhatsApp. On Monday, the Meta-owned instant messaging app announced the rollout of the new messaging feature that will reach all its Android and iPhone users in the coming weeks. It was initially tested with some beta testers, WhatsApp beta tracker WABetaInfo reported in late October. The company has confirmed to TechCrunch that the feature has begun rolling out globally. Users will see their contact at the top of the contacts list on WhatsApp when they create a new chat. Tapping that contact will take them to the chat screen they can use to send messages to themselves. Although the native feature to message yourself is new on WhatsApp, some users have already been using a workaround for some time. You could already send messages to yourself using the app’s ‘click to chat’ feature. Nonetheless, the new offering removes the additional steps that users needed to self-chat using the wa.me URL. Users can also pin their self-chat messages to the top of the conversation list if they don’t want to search them in their widely polluted chats list. WhatsApp rival Signal has a feature named Note to Self that addresses the same use case — it lets you create messages for personal use. However, unlike WhatsApp’s newly launched feature that is accessible from the top of the contact list on the app, Signal doesn’t suggest your own profile at the top of the recipient list. Users need to search and select the contact entry ‘Note to Self’ to use the feature. Similarly, community platform Slack has a dedicated space titled “Jot Something Down” to let users send notes to themselves. Telegram also offers a similar feature called Saved Messages that lets users bookmark any important messages as well as save their notes and reminders that can be accessed in the future. Messages once saved can be accessed from the top of the chats screen. However, Telegram users initially need to access the feature by tapping the hamburger menu on Android or through the settings menu on iOS. WhatsApp rolls out a feature that makes it easier to message yourself by Jagmeet Singh originally published on TechCrunch