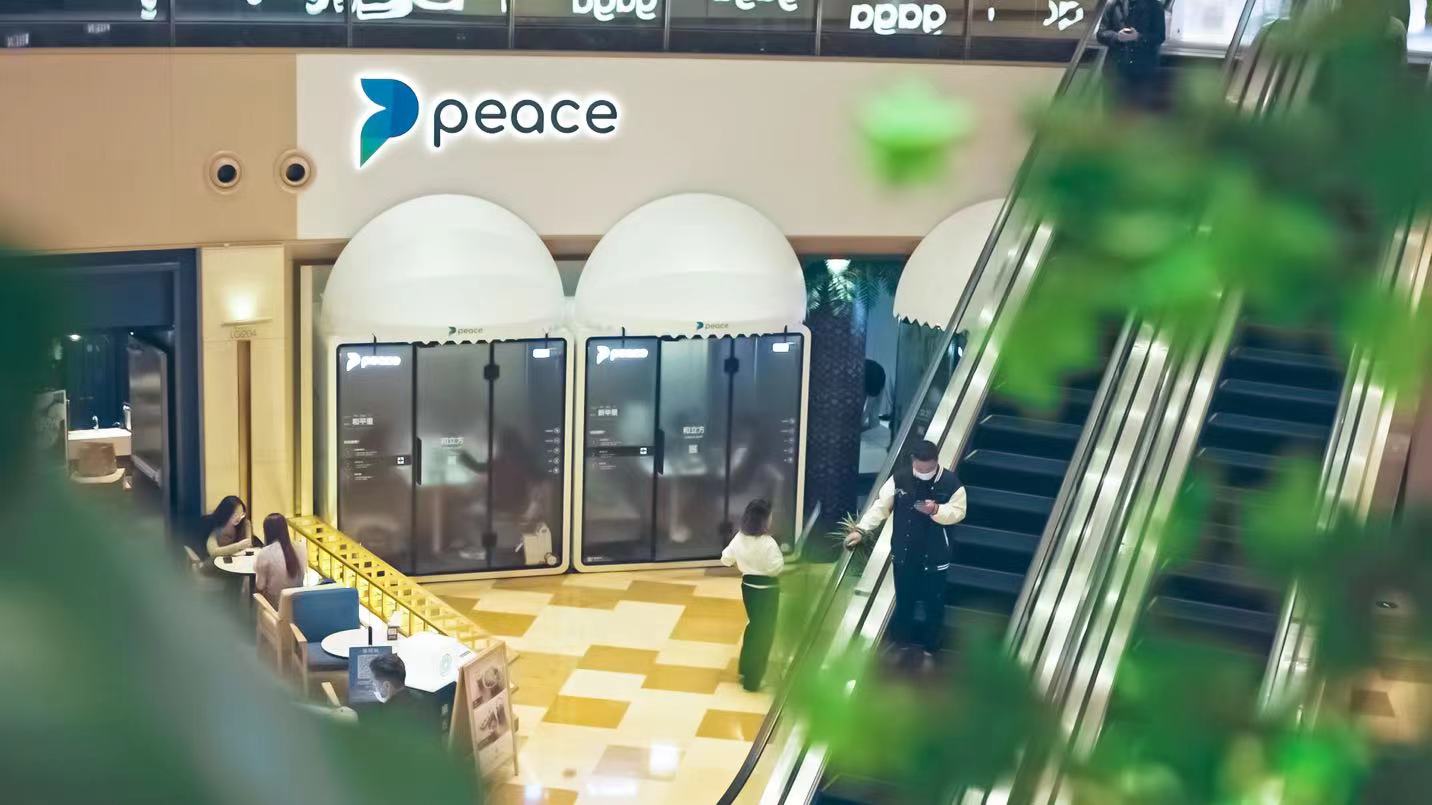 Penaloza named his new venture Peace in hope of boosting mental health for those using the company’s quiet, privacy-first space to avoid crowded offices and noisy cafes. Peace announced this week that it has raised a seven-figure funding round from a group of business partners and entrepreneurs. Peace is the latest iteration of Penaloza’s continuous experiment with flexible work. In 2019, the executive spearheaded an internal project to offer pay-as-you-go spaces at WeWork China. A year later, he moved on to found his own proptech-focused startup studio, which incubated a similar on-demand workspace service but tapping third-party landlords. Seven-month-old Peace launched its first batch of portable pods last week at three high-end malls and two office buildings in the heart of Shanghai. It aims to deploy 1,000 of them across the metropolis in the coming year, Penaloza said on a video call from one of the pods in the mall. “We are selling privacy on demand,” the founder said when I asked if the booths would be equipped with security cameras, an infrastructure that has become ubiquitous across China and often raises privacy concerns. “We don’t plan to put cameras in… I think it’s more important to make our users feel that it’s really 100% of private space. No one can hear what they’re saying. And of course, no one can see their screen or them.” Each Peace pod is 35 square meters big with a meeting table that fits four people. The portable box comes with an app-enabled lock, electric sockets, WiFi, soundproof walls, and ventilation fans. It also features COVID-19 prevention technology provided by a startup called LumenLabs that utilizes the novel far UVC method to inactivate viruses and bacteria. Missing Attachment The long list of equipment explains the steep cost of the pods — in the mid tens of thousands of yuan (1 USD = 7.16 yuan as of writing) to manufacture one. Penaloza believes his team has figured out a sustainable revenue model. Each pod costs 11.25 yuan per 15 minutes, but this is a reference price, the founder said, and in the future, the cost can vary based on location and real-time supply and demand. It isn’t cheap — an Americano costs about 25 yuan at an average cafe in China’s top-tier cities like Shanghai and Shenzhen, but if four people were to split the cost of 45 yuan, plus the upsides that a pod brings — privacy and stable internet — and if Peace reaches a meaningful density, it could be a viable business. Peace also found a sweet spot in its relationship with landlords, including retail spaces, office building lobbies, urban renewable spaces, transportation hubs, exhibition centers, and residential developments. “We don’t rent the space,” explained Penaloza. “Our formula for working with real estate companies is one of our most secret sauces because this hardware, in the landlord language, is actually an asset enhancement. It should be part of the renovation budget that they have from year to year to make the building better and keep the building competitive, so Peace pods would attract white-collar people to spend more time in a building.” “Even when we put it in an office lobby, even though everyone has an office upstairs, people still use it, especially in China where hybrid work is not popular yet, because small meeting rooms in offices are frequently fully utilized, and everyone needs peace and quiet from time to time,” the founder added. Working with landlords also helps Peace save on maintenance costs. Since the COVID outbreak, the Chinese government has started asking operators of enclosed spaces to clean their facilities after use. Peace’s tech platform automatically alerts the property manager at the end of every booking, and a cleaner will be sent to the pod, a process that can be as quick as spraying surfaces with disinfectant and wiping them. Investors in Peace consist mostly of entrepreneurs, including Joachim Poylo and Francois Ammand from Aden Group, Chris Brooke from Brooke Husband, Pablo Fernandez from CleanAir Spaces, Patrick Berbon from CM Venture, Hei Ming Cheng from Kailong, Wei Cao from Lumenlabs, Penaloza himself, and Panda Eagle Group. WeWork China’s former tech head introduces on-demand work pods for mental health by Rita Liao originally published on TechCrunch