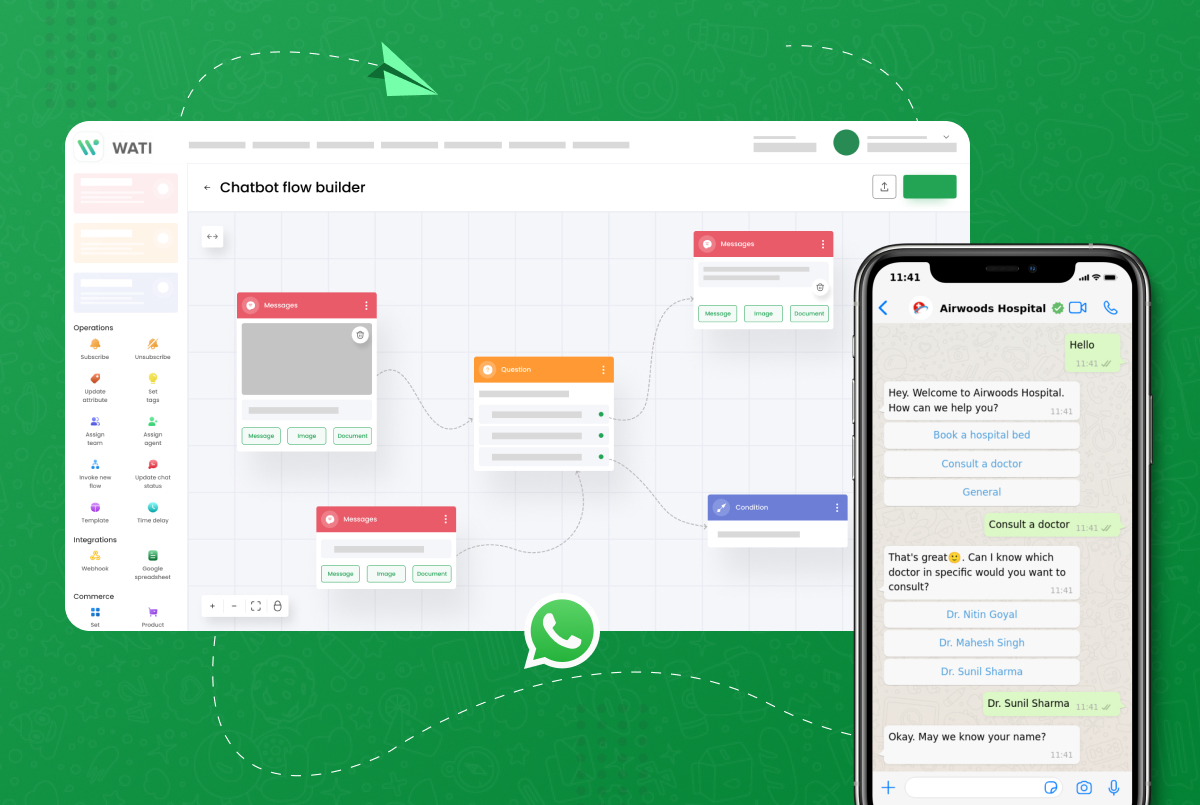 The round was led by Tiger Global with participation from returning investors Sequoia Capital India & Southeast Asia, and new investors DST Global Partners and Shopify (marking the e-commerce platform’s first venture investment in a startup operating in the Southeast Asia region). WATI’s last round of funding was an $8.3 million Series A announced 10 months ago, and its new round brings its total raised to more than $35 million since 2020. WATI founders Bianco Ho and Ken Yeung began working together in 2016, building Clare.AI, an omnichannel AI digital assistant for large Asia enterprises. In 2020, they launched WATI to give SMBs a self-service, low-code product on the WhatsApp for Business API. The startup currently has more than 6,000 customers in 75 countries, including SMBs in spaces like house cleaning, schools, education centers, edtech, fintech, medical facilities, D2C brands and Shopify stores. Ho told TechCrunch that while she and Yeung were working on Clare.AI, “our assumption was that only larger enterprises had the resources to deploy a successful digital assistant with artificial intelligence.” After a few years of working with their clients, however, the two realized many were looking for a simpler solution, so WATI was created. Part of the reason for its launch was the digital acceleration caused by the pandemic, as many businesses rushed to get online. Missing Attachment In many emerging markets, and mature markets like Europe, WhatsApp is the preferred communication channel between customers and businesses. WATI helps non-technical businesses scale their customer support, customer engagement and acquisition through its CRM. WATI’s customer engagement software is built on WhatsApp for Business’ API and lets clients send personalized notifications. The platform includes a collaborative team inbox used by multiple agents, and features like smart routing, canned responses, data tagging and analytics. Interactions can be automated through low-code workflows and chatbots, and connected to e-commerce platforms and CRMs. WATI also has integrations with platforms like Zoho, Shopify and Google Sheets. An example of how WATI is used is a large e-commerce company that relies on its to manage campaigns like Prime Day. The company usually gets 60 to 100 messages a day from customers through WATI’s team inbox, the majority of which come from its website’s WhatsApp chat, and sends about 30,000 messages every day when campaigns are active. Another example is an edtech client that has used WATI for almost two years. They rely on about 50 templates a month for lead generation, nurturing, payment reminders and class updates, and send 20,000 to 30,000 messages a day. WATI also helps them get high-quality organic leads through a WhatsApp widget on their website. Ho said WATI’s closest competitor is the native WhatsApp for Business app, which most SMBs start off using, but WATI is a suitable fit for them as their businesses scale. Funding will be used on hiring and investing in WATI’s product stack for low-code automation. The company also has go-to-market plans for emerging markets, like Latin America and Southeast Asia WATI, a CRM tool built for WhatsApp, raises $23M led by Tiger Global by Catherine Shu originally published on TechCrunch