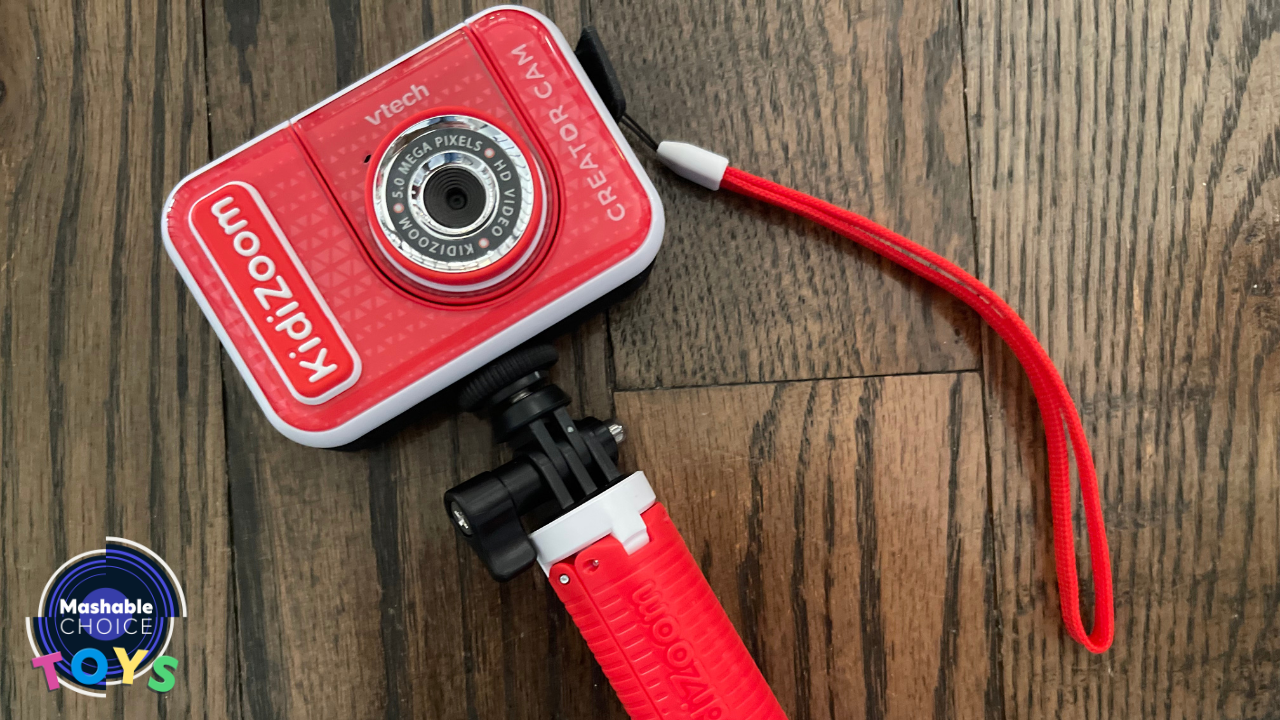 Ryan’s World toy reviews. This was the YouTube channel my son couldn’t get enough of when he was little. I mean he’s still little. He’s only 10. But I’m talking about when he was around 4 years old — that kind of little. He would watch Ryan unbox toys and play with them, and I’m pretty sure somewhere in his mind he was thinking, This is what I want to do when I grow up. In some ways, his wish has come true in being a part of this review of a vlogging camera. The VTech KidiZoom Creator Cam retails for $69.99, which is a bit pricey for what the camera offers. However, it’s almost always on sale for around $40, which is a much more reasonable price. The camera comes with a tripod, green screen, 22 different green screen options, and some games you can play as well. The camera also functions as a regular camera, but the quality of the photos isn’t very good. images-1.fill_.size_2000x1500.v1671573354

Vloggers in the making

I loved the educational value of the toy as my kids learned how to film, edit, create videos — and just be creative overall. Because of the limited storage, the camera didn’t receive a lot of consecutive playtime. It was more of a little here and a little there versus something that held their attention for a long period of time. Our daughter, who is 14, tested this toy with her brother, who is 10. She said the camera is “a good toy, but the quality could be better. I like that it’s tiny and not very complicated. I like making videos with it and taking pictures, too.” images-2.fill_.size_563x750.v1671573354 The feature they both enjoyed the most was creating the videos using the green screen. They said their favorite background was the one where a dinosaur chases you — they both thought that one was funny. There are a variety of backgrounds to choose from when using the green screen, such as a beach theme, disco, a field of flowers, and an underwater background to name a few. As far as the built-in games, my daughter’s favorite was the one where you stack layers of cakes on top of each other. That game was able to hold her attention for a while. My son enjoyed creating videos with the camera, but didn’t have much interest in playing the games.I can see young kids who aspire to be content creators (the types of kids who already know how to operate a ring light) getting a lot of playtime out of this toy. It’s super compact and portable, and so easy to use. Again, my kids and I just wished the camera’s quality were better and it had more storage.

Is the VTech KidiZoom Creator Cam worth it?

Overall, this is a great vlogging camera for a little kid who wants to learn the basics of green screens and video creation, which is pretty big for this generation of kids who have grown up with devices and YouTube channels. And I’m not going to lie, this 40-something woman who had never personally used a green screen learned a few things, too. The VTech cam is definitely a starter video camera for younger kids, and probably not suitable for older kids who actually want to create a YouTube channel or any sort of online video presence. For that, I’d splurge for something better.