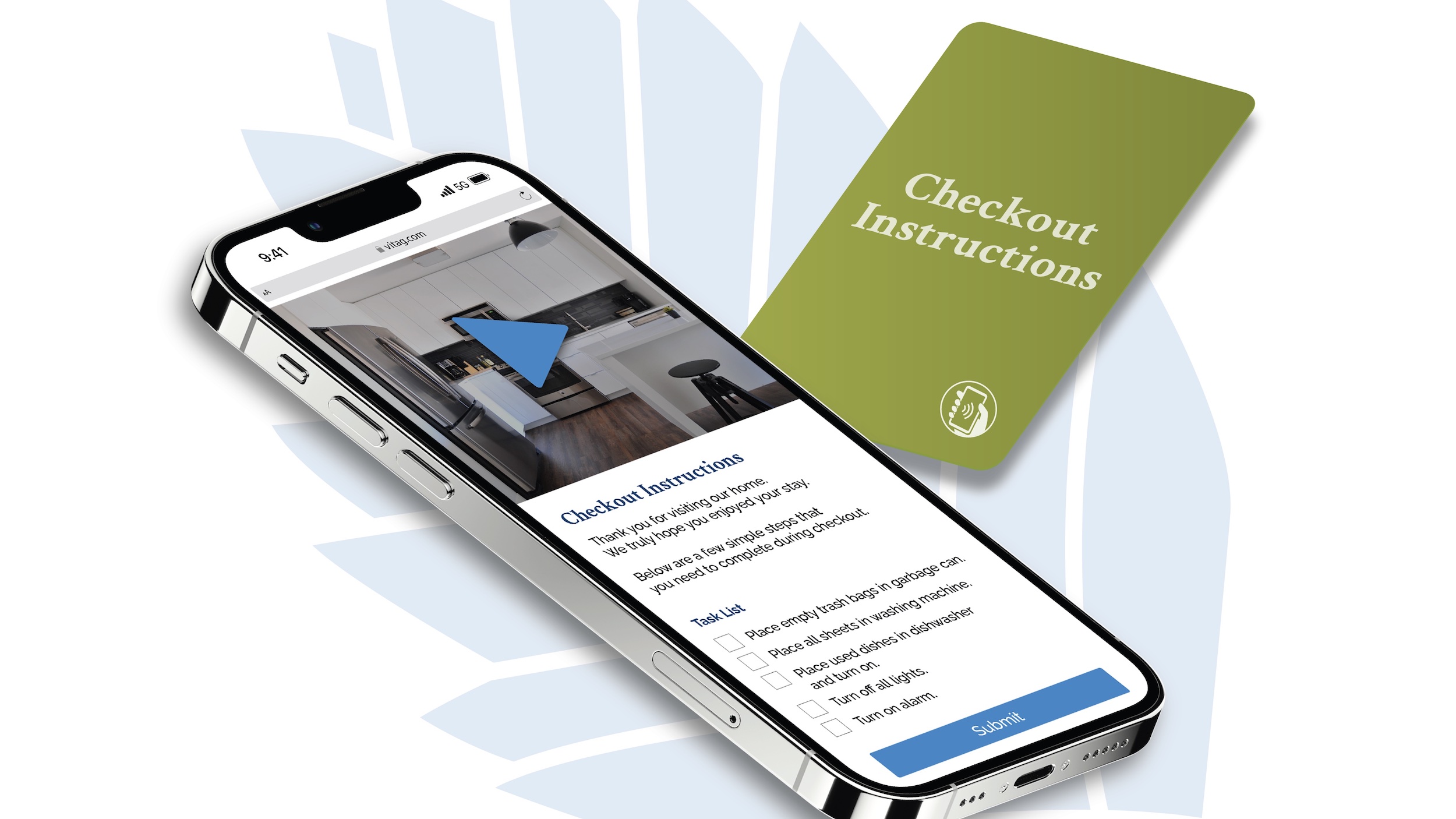 Usability remains a sticking point, both in terms of the effort it takes to create content and align it with a QR code, and also from the end-user’s standpoint who has to open their camera app to scan the QR code — something that might not even work in low-light situations. Throw into the mix aesthetics (who’s ever seen an attractive QR code?), and there’s a strong case to be made for an alternative that brings the QR code spirt to a more user friendly format. This is a problem that Vitag is setting out to address, with an NFC product designed for video instructions. Or, “video sticky notes,” as the company calls them. Founded in Dallas in March this year, Vitag is officially announcing its private beta today at TC Disrupt, where the company was selected as one of TechCrunch’s Battlefield 200 startup cohorts. We caught up with cofounders Sean Jackson (CEO) and CTO Daniel Reiling to get a sneak peek into what exactly it’s looking to achieve. IMG_20221018_104406-e1666120051132

Vitag’s product consists of two core “things”: a mobile app for people to record instructional videos or upload existing material from their device, and a physical NFC-enabled tag that they can program the video to. All the end-user then has to do is tap their phone on the tag, and the video pops up on their screen, demonstrating to an AirBnb guest how to use the A/C system or where the recycling goes. House_Rules_Mockup-e1665654948730 Of course, it’s easy enough to achieve all this through QR codes — there are many online services for generating QR codes which someone can then tether to a YouTube video that they created. What Vitag does, though, is provide the tools for creating the video, managing tags, and hosting the actual video itself — it has built its own hosting service on top of Google Cloud, with the content viewable only to those with access to a unique URL, which is activated when users tap their phone to a tag. “We created our own service where you can capture a video on your phone, it goes to our servers, and it’s hosted there,” Reiling said. It may seem more intuitive to have just used an existing white-label video hosting service from a company like Vimeo, but the founders explained its reasoning for building its own hosting service: it’s about scalability, controllability, and customizability. While Vimeo might be great for a company to host its own videos, when it comes to potentially hundreds or thousands of Vitag’s own customers who need their own individual accounts for creating and storing hundreds or thousands of videos, this requires full control of the experience from creation through to hosting. The entire back-end and front-end packaged in a single platform. “Our goal is to remove complexity from the process of sharing instructions,” Jackson said. “We believe people are tired of cobbling together different technologies to complete a task — from QR code generators, to different hosting platforms, to desktop publishing tools, to printers, to adhesives — and everything else required.” However, it’s not purely about video. A customer can configure their tag so that it links to a static text page, a photo, URL, or whatever they want. The company offers $2 pre-printed tags specific to a certain type of business, for example restaurants or retail, while creators can also order personalized tags with their own individual text and a choice of different backgrounds. It’s also worth noting that companies can elect to have QR codes printed on the NFC tags for those who prefer to use QR codes, IMG_20221018_102945-e1666122255149 Furthermore, Vitag also supports NFC tags from third-party providers, with an in-app function for users to format the tags to work with Vitag. The company said that it’s also planning additional tools in the future, including a desktop app with additional features for small businesses and enterprise customers.

NFC, or near-field communication as it’s more formally known, is hardly a new technology, but it has taken its time to properly hit the mainstream consciousness, where it still pretty much resides in the payments domain. But its recent growth has been aided somewhat by recent adoption from big tech companies such as Apple, which started to fully embrace NFC with iOS 13 back in 2019 — instead of only allowing iPhone apps to read NFC tags, Apple started to allow apps to write directly to blank tags, and interact through native protocols. The company also recently launched a new “tap to pay” feature that allows iPhones to accept contactless payments over NFC. Elsewhere, NFC is also being used as a replacement for business cards, allowing people to exchange information just by tapping phones. So while QR codes have seen a major resurgence in recent years and are unlikely to being going away any time soon, NFC is on something of an upwards trajectory too, which is where Vitag wants to make its mark. “We believe that consumers are becoming more comfortable with ‘tap to’ events, with payments being the most used today,” Jackson said. “And as more people become exposed to digital business cards the market adoption of ‘tap to’ will only increase.” For now, Vitag is looking to serve the short-term rental property market in the U.S., which Jackson identified as a particularly powerful use-case for video instructions. But plans are afoot to target all manner of verticals, from restaurants and retail stores to gyms. “As we shared our vision of what this technology could do, we found use-case after use-case from almost everyone we encountered,” Jackson explained. “People that stayed in rentals wanted to use them instead of outdated guest books. Restaurant owners wanted them as a replacement for QR codes. Gym owners wanted them to show people how to do a workout. Retail store owners wanted to use them for product demos in-store. According to Jackson, Vitag has so far raised around $145,000 from angel investors in Texas, including WP Engine cofounder Jason Cohen, though he’s hoping to raise some seed funding in the near future. Videos on tap: Vitag launches NFC-powered ‘sticky notes’ for visual instructions by Paul Sawers originally published on TechCrunch