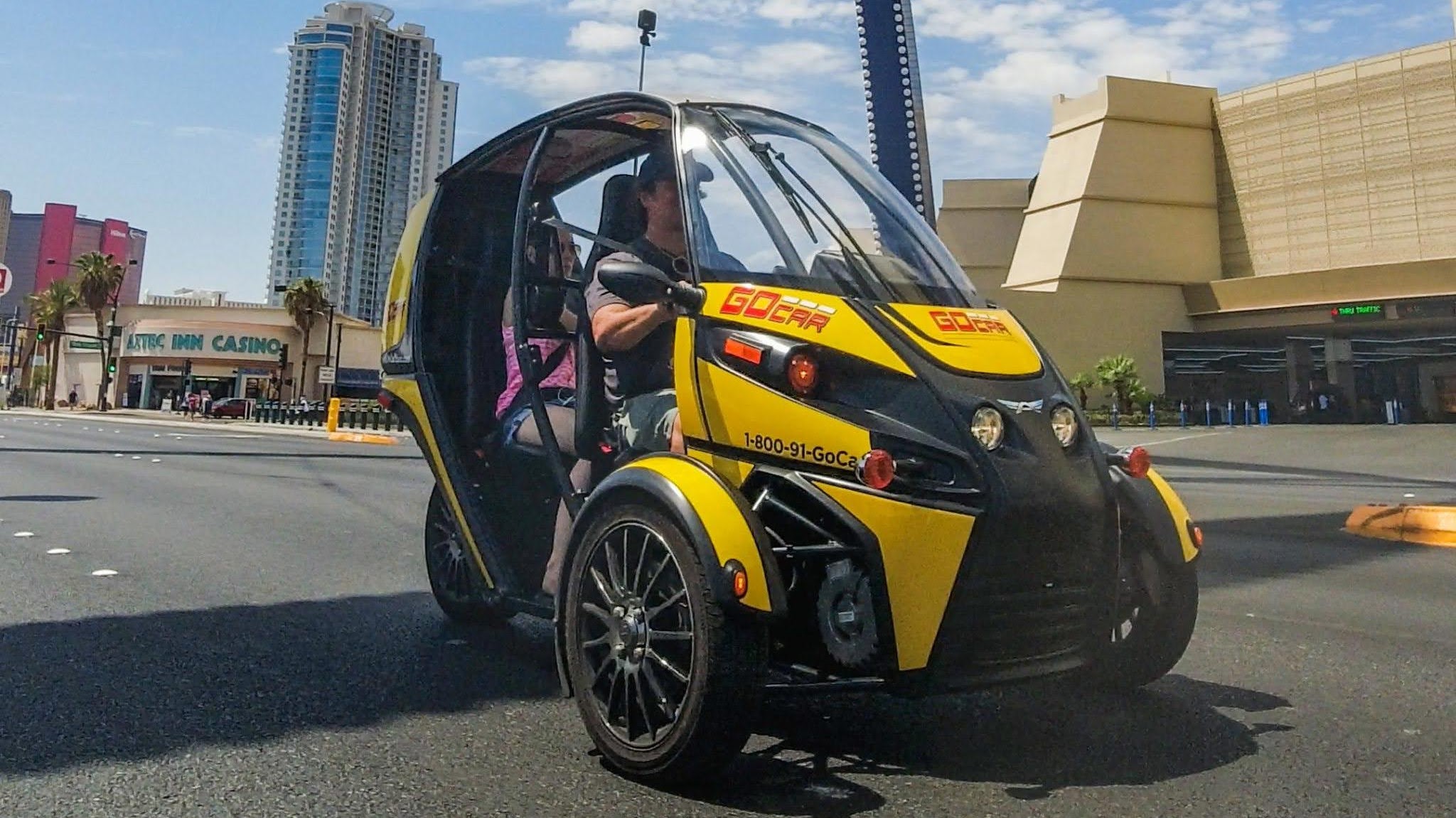 Here’s how it’ll work: Arcimoto’s FUVs will be kitted out with Faction’s sensor suite of cameras and radar and its Level 2+ advanced driver assistance system, which handles tasks like lane assist and collision avoidance. The vehicles will also have a tablet that features GoCar’s GPS-guided tour of the Vegas strip (GoCar wants to eventually expand this tour to include Red Rock Canyon and the Hoover Dam). The vehicles will go from GoCar’s depot in the Arts District to various hotels along the strip — a straight, five-mile stretch of road with a 30 mile-per-hour speed limit. Tourists will then collect the FUVs and drive them along the tour route at their own pace before dropping themselves and the vehicles back at their hotels, whereupon the FUVs will “drive themselves” back to the GoCar depot. I use quotations around “drive themselves” for a reason. Faction’s system can drive itself from A to B on a predetermined route and knows to stop itself if it encounters an anomaly or a task it’s not able to complete, like an object en route or an unprotected lefthand turn. But for judgement calls, it relies on the teleoperator. The teleoperator will remotely adjust the trajectory line that the vehicle is following to go around an object or into a parking lot and give the order to execute. Arcimoto’s partnership with Faction and GoCar will originally involve about 20 vehicles starting in mid-2023, but the companies hope to expand the offering to an additional 290 vehicles across Vegas and other cities where GoCar operates, including San Francisco, San Diego and Barcelona. Faction is a company that sees Level 5 autonomy as a research project that’s at least a decade out from actually commercializing, and teleoperation as a necessary component to scaling autonomous fleets today. The startup is building its business by focusing on doing “a right-sized tech stack with right-sized vehicles,” meaning Faction relies on a range of cameras, including a thermal camera, and radar to reach basic levels of autonomy, rather than fitting out a vehicle with expensive lidar and the latest compute systems. “Right now our current vehicle systems are under $35,000,” Ain McKendrick, Faction’s CEO and founder, told TechCrunch. “We take about a $17,000 Arcimoto vehicle platform and we put on about $12,000 to $13,000 worth of tech. We’ve announced our partnership with Nvidia, but I don’t want their latest and greatest liquid-cooled Omniverse thing that’s going to take a trunk and a minivan to run. I want two generations back in their automotive-grade package that we can scale with.” McKendrick said the benefit of being a “second wave autonomy company” is that Faction isn’t trying to solve for all of the edge cases just now. As it relates to its partnership with Arcimoto and GoCar, Faction is just trying to solve for replacing the human that would otherwise deliver those vehicles to customers’ hotels. “Our goal is to be profitable at the $2 per mile price point out the gate, not to have the promise that it’ll be cost-reduced 10 years from now,” said McKendrick. Arcimoto-Las-Vegas-1 Aside from the gimmicky aspect of having a tour car drive itself to a customer’s hotel, GoCar is here for the potential cost-savings to its business. “We’ve thought about the self-serve model where people can come and help themselves to a vehicle and drive off, and we used to have multiple locations, but the economies of having these multiple locations is challenging because you don’t know where the customer is going to be,” Nathan Withrington, GoCar founder, told TechCrunch. “We might have 10 cars available at one location and the other has a waitlist of 30 people. Then moving cars across town and everything is a nightmare.” If customers can just summon a vehicle to them, where GoCar stores them becomes a lot less important. The company will get visibility from its cars just being on the road, and it’ll be easier to clean and prep them when they’re all accounted for. GoCar has already been working with Arcimoto to offer FUVs to tourists. Withrington says FUVs are the first type of EV the company has put in its fleet that can actually handle the range it needs, can cross bridges and is highway legal. Plus, tourists love driving them. For Arcimoto, the partnership is a chance to expand its reach as a tourist offering for vehicles, while also building on its current partnership with Faction. The two began working together last year to build the D1, a semi-autonomous delivery vehicle based on the FUV, and have been running pilots in the Bay Area since July, according to McKendrick. Vegas visitors can take semi-autonomous EVs for a tour starting in 2023 by Rebecca Bellan originally published on TechCrunch