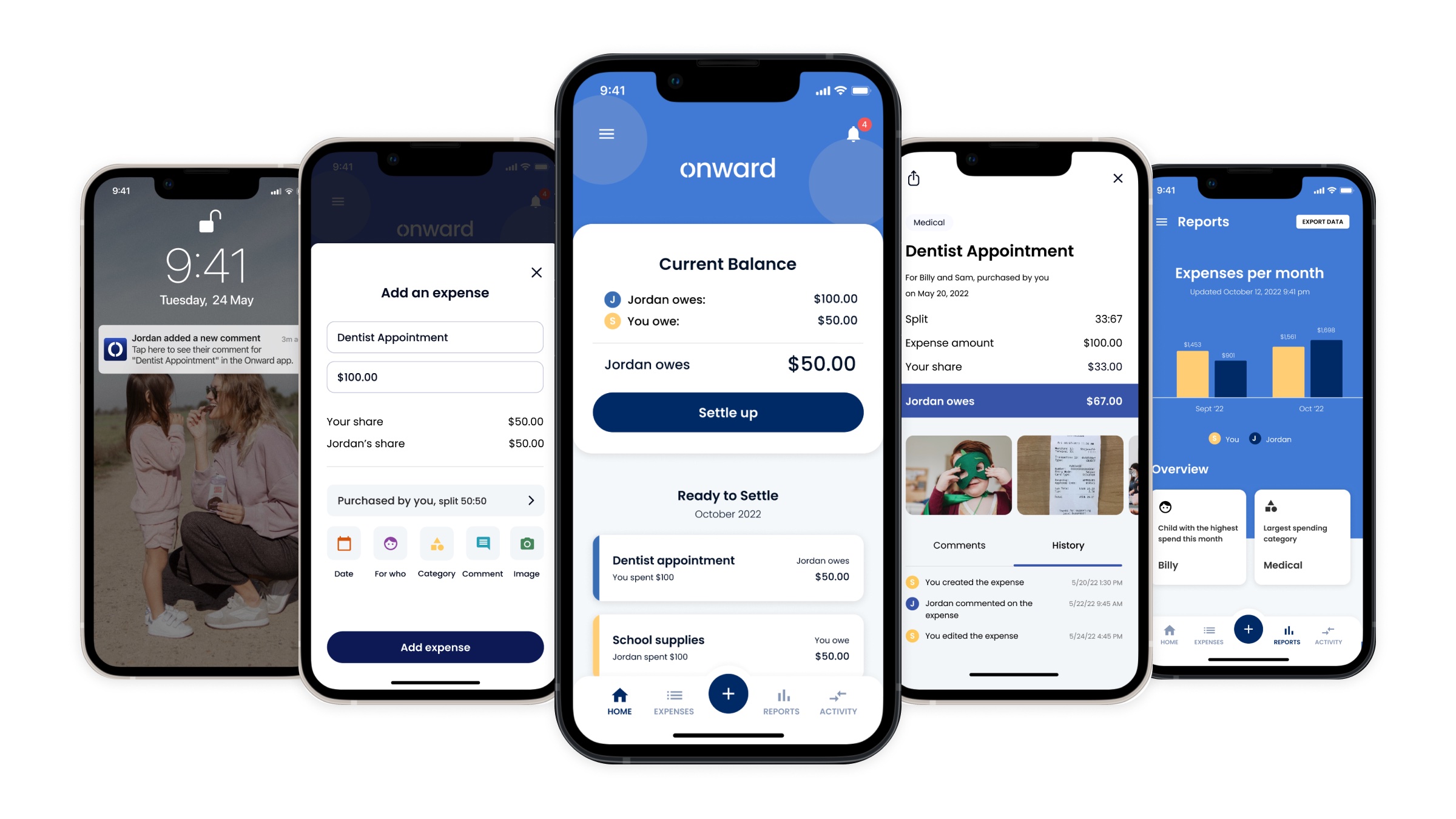 And, according to a 2015 report, just 50.2% of all 13.6 million custodial parents in the United States had either legal or informal child support agreements. Even in those cases, most agreements don’t cover expenses beyond the basics such as medical bills and extracurricular activities, among other things. This means that divorced parents end up going through a lot of back and forth about who’s paying for what, how and when. Finances when you’re co-parenting are an issue even in the most amicable of divorces. The daughter of divorced parents herself, Jacklyn Rome founded Onward in 2020 with the aim of helping divorced and separated parents more easily manage their shared expenses. Rome, who previously led new product launches at Uber and Blue Apron, said she built the app with the intent of not only alleviating headaches for the parents but also for helping reduce family tension overall. As she can personally attest to, children also suffer greatly from being caught in the middle as their estranged parents bicker over money. Today, Onward – formerly called Ensemble – has raised $9.7 million in a Series A funding round led by Atlanta-based TTV Capital to advance on its mission. Lerer Hippeau, Citi Ventures, Correlation Ventures and Gingerbread Capital also participated in the financing. The Los Angeles-based startup previously raised $3 million in seed funding in March of 2021. Since that time, Onward has launched a number of new features, including the ability to pay your co-parent back through the platform, partial payments and the ability to track other expenses not related to children such as shared mortgages or telephone bills. One co-parent for example may have taken a child to the dentist at a cost of $120. They can upload a photo of the receipt, and the other co-parent gets a notification to view all the details around the expense. The two can negotiate if needed all via the app, and settle the expense through a connection to payment providers such as Venmo or Zelle through the Onward platform. Rome says the company has grown significantly with nearly 100,000 installs. So far, Onward has leaned into social media as a marketing tool, including leveraging TikTok as a platform. By partnering with influencers who are co-parents, Rome said, the startup has been able to boost awareness of its offering. Onward remains pre-revenue. The company plans to begin monetizing early next year via “a suite” of new financial products,” including connected credit cards, according to Rome. Down the line, Onward may also build out a paid subscription model. Missing Attachment Incorporating transparency into the platform has also been a priority, Rome said. “Very often, men will say that transparency is their biggest pain point – they may or may not believe that the expenses are legitimate,” she told TechCrunch. “In our app, they can view receipts and eventually with our cards, will be able to have a third-party verify where every transaction took place.” Onward’s new capital will go toward building out those products, additional testing of new marketing channels and boosting its current headcount of 10. While there are a number of fintechs in the broader family tech space such as Greenlight, Step and Acorns, Rome believes there is a “ton of green space in this market.” “There are 50 million co-parents in the United States, and they represent a massive, massive market that hasn’t yet been served,” she said. As to way, Rome speculated that “it might be considered a little bit less sexy of a market, or those who have been through it tend to be less likely to found a company.” TTV Capital doubled down on its investment in Onward, with partner Mark Johnson describing the app as being “brilliant in its simplicity.” “Jacklyn and her team have truly listened to the co-parents who are using the app – and have gone above and beyond in rolling out new improvements and features based on their needs,” he wrote via email. “We’re proud to support Onward as they scale to help even more co-parents easily navigate their unique financial situations.”   Uber alum rakes in $9.7M to curb finance-related fights between co-parents by Mary Ann Azevedo originally published on TechCrunch