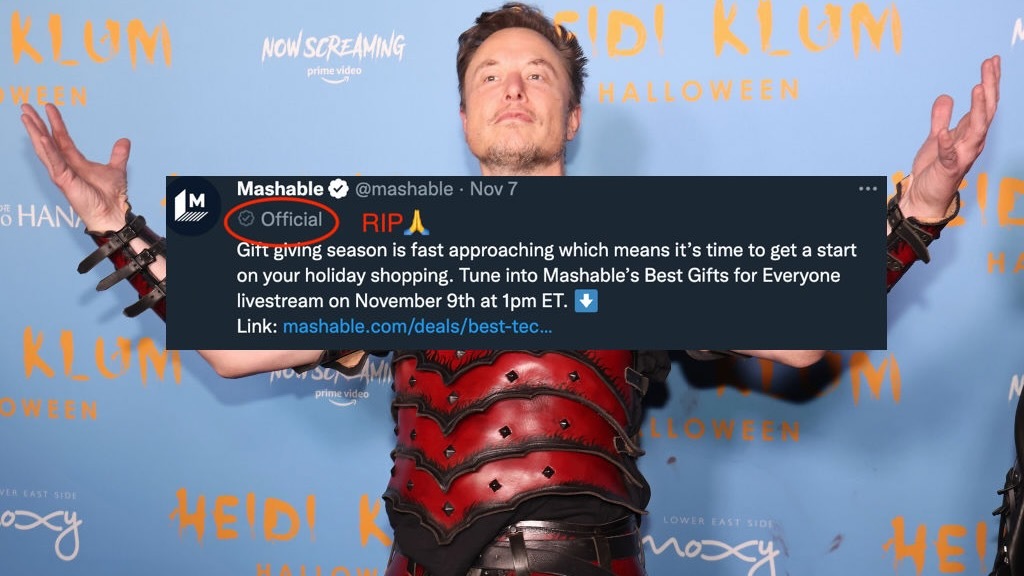 Twitter’s “Official” checkmark is gone before it even had time to be fully rolled out. The grey tick debuted on Wednesday (Nov. 9) like a fart in the wind: impossible to ignore for a moment, then quickly gone forever. The new label specified that a celebrity, publication, or public figure was actually that person. It spelled out the word “Official” with a grey checkmark underneath the person or publication’s handle. So pretty much it did the job of the old blue checkmark, which new Twitter head Elon Musk is selling off for $8 per month. So the “Official” label was basically a second tick doing the job of the original checkmark to allow Twitter to sell absolutely meaningless blue ticks to people who are willing to pay. Who could have predicted something so, um, easy to understand would be a total disaster? The new checkmark hit timelines before midday eastern time Wednesday. Most major American publications, including Mashable, seemed to be labeled “Official.” On the other hand, which celebrities and public figures got grey checkmarks seemed pretty confusing. It appeared to be quite random. And frankly, two checkmarks on one account just doesn’t look right. Tweet may have been deleted (opens in a new tab) Tweet may have been deleted (opens in a new tab) But as quickly as the new checkmark was unveiled, it was gone. Perhaps Twitter quickly realized it was a heck of a job to decide who got the check and who didn’t. Hours after it debuted all publications and people were stripped of the “Official” badge. Apparently, Elon Musk himself made the call. Popular YouTuber Marques Brownlee tweeted that his “Official” badge was gone just over an hour after it he tweeted he had gotten it. “I just killed it,” Musk replied, later adding, “Blue check will be the great leveler.” Tweet may have been deleted (opens in a new tab) So it seems Musk is perhaps recommitting to the idea that a purchased blue tick — which requires no actual verification of identity — will carry the exact same weight as the verification for a government official or major publication.Soon after killing the “Official” badge, Musk tweeted: “Please note that Twitter will do lots of dumb things in coming months. We will keep what works & change what doesn’t.”Alrighty then, so we can expect more dumb stuff.