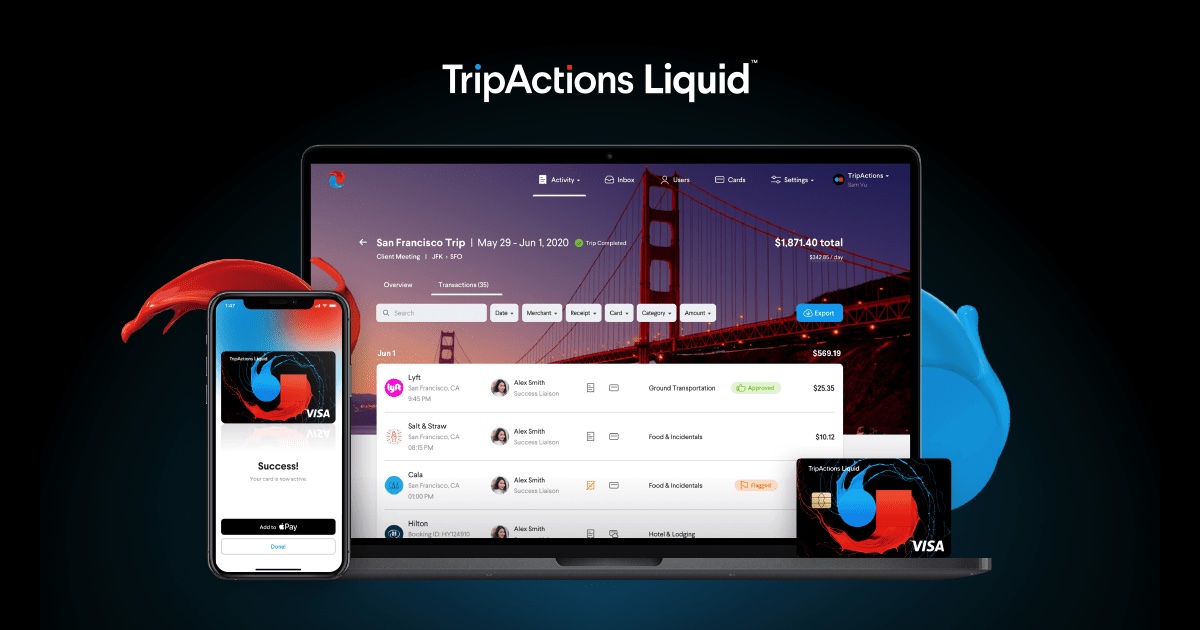 Specifically, TripActions has secured a warehouse debt facility from Goldman Sachs with a $200 million commitment and the potential to “flex up” to $300 million if needed, noted EVP Michael Sindicich, head of TripActions Liquid. The company also has landed an asset-backed lending facility of $100 million led by Silicon Valley Bank. TripActions expanded from its core offering of travel expense management and accelerated the launch of its corporate card and general expense management offering, Liquid, in March 2020. Corporate travel had slid to a halt due to the onset of the COVID-19 pandemic, taking the company’s revenue to zero. At that time, TripActions began underwriting businesses by funding their accounts with capital and giving them the opportunity to pay the company back at the end of their statement period, or billing cycle (typically a 30-day time frame). Since that launch, the company’s Liquid offering has grown exponentially, with users such as payments giant Stripe, Canva, Carta, Toast, Patreon, Momentive.ai, Lyft, venture firm and investor Andreessen Horowitz (a16z), Loom, Databricks and VaynerMedia. By leaning full force into the spend management space, TripActions has been competing with the likes of Brex, Ramp and Airbase, among others. “We continue to grow at a rapid pace,” Sindicich told TechCrunch in an interview. “The facilities give us more ammo and buying power to bring on, and fund, more businesses as we’ve been scaling.” TripActions saw the spend volume on its platform increase by 400%, or 5x, in the third quarter, according to Sindicich. The company saw 4.2x year-over-year revenue growth in the third quarter from its Liquid offering in particular, he added. That revenue is derived from a mix of interchange and subscription fees. There’s no doubt that such growth factored into TripActions’ ability to raise an “up” round — $154 million in equity and $150 million in a structured financing deal — in an environment where many startups are either raising down or flat rounds, if they are able to raise at all. The majority of TripActions’ new customers are signing up for corporate travel and TripActions Liquid to do their expense management and travel payments, according to Sindicich. “There’s tons of spend management companies that have been created in the last few years and I think our unique value proposition is being able to combine the travel the corporate card and the expense piece all together because so much of employee expenses have to do in some way, shape or form with a trip,” he told TechCrunch. In late September, TripActions was said to have filed confidentially to go public in the second quarter of next year at a $12 billion valuation. When asked about those plans this week, a company spokesperson said: “We are doing our part to be ready to go public when the conditions are right and the markets open up again but we can’t predict when that will be.” TechCrunch’s weekly fintech newsletter, The Interchange, launched on May 1! Sign up here to get it in your inbox. Got a news tip or inside information about a topic we’ve covered? We’d love to hear from you. You can reach me at [email protected] Or you can drop us a note at [email protected] If you prefer to remain anonymous, click here to contact us, which includes SecureDrop (instructions here) and various encrypted messaging apps.) TripActions secures $400M in credit facilities from Goldman Sachs, SVB by Mary Ann Azevedo originally published on TechCrunch