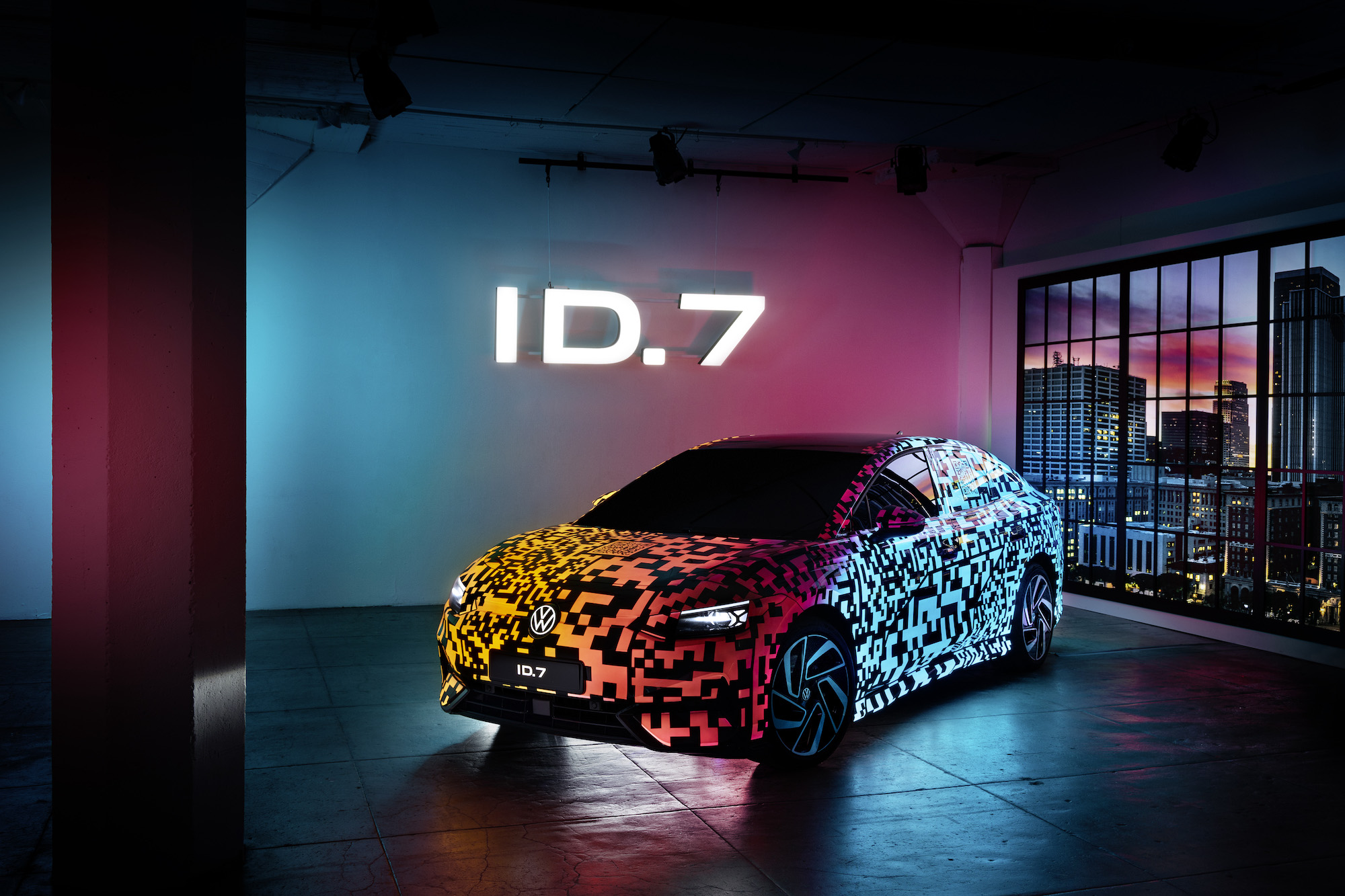 And the most exciting part of the debut wasn’t the vehicle’s multi-layered explosion of yellow, orange, red and blue camouflaged electroluminescent paint that lights up on command. (although it is eye-catching for the near-production version of the vehicle). Instead, it was a few features and changes from its previous ID models that showed VW is trying to up its software and human-machine interface design game with an approach that is closer to what consumers might find in Tesla models, the Porsche Taycan and the Rivian R1S and Rivian R1T. IMG_5906-id7 The ID 7 sedan, previously shown as a concept vehicle in China under the name ID Aero, is one of 10 new electric models that will into production by 2026, according to Volkswagen Passenger Cars CEO Thomas Schäfer. The EV will launch in China, Europe and North America. Like its other ID siblings, the ID 7 is based on the MEB platform, a flexible modular system — really a matrix of common parts — that VW Group brands including Audi, Seat, Skoda and Volkswagen use to improve the efficiency and cost-effectiveness of producing EVs. The Volkswagen ID.3, an electric hatchback that is only sold in Europe and the Volkswagen ID.4 SUV and ID.5, along with various variants of the Audi Q4 e-tron are built on the MEB platform. By 2025, the automaker expects more than 80% will be. The ID 7 does have a few standout changes and features worth noting, starting with a new interface on the car’s infotainment system. The central display is larger at 15 inches. But more importantly, the way users will access and interact with the functions located on the screen, has changed. The climate functions are now prominently and permanently displayed on the bottom of the central infotainment screen. Along the top and upper left is where the driver and quickly access information on the vehicle and advanced driver assistance features. id7_Cockpit In what promises to be controversial in some automotive circles, VW has adopted a new air conditioning system that uses digitally controlled air vents similar to what Tesla vehicles are equipped with. That means no more physical air vents that a driver or passenger can move to change the direction of air flow. Instead, users can access voice controls or the central touchscreen to change the direction of the air flow. The air conditioning system is also designed to be more intuitive. If a driver approaches the vehicle with their key, the system should turn on and begin cooling the interior on hot days or heat it when the temperature is colder. Volkswagen is also trying to step up its natural language processing game. The company said users will be able to give specific verbals cues, like Hello Volkswagen, my hands are cold!,” and the system will respond by starting the steering wheel heating function and directing warm air to the driver’s hands. Other additions and changes featured in the ID 7 includes an augmented reality head-up display and illuminated touch sliders on the bottom of the touchscreen. ID-7-side-view The exterior design does fit within the current EV portfolio at VW. The sedan has an aerodynamic front section and roof that has a coupe-like slope to the rear. The design, which can be difficult to discern amid the illuminated multi-colored camouflage, is designed to both help to reduce energy consumption and increase the range, according to the company. Air intakes are located in the front end, to guide the air through them and down the sides of the vehicle to the rear, forming an air curtain, which calms the air flow at the sides of the vehicle. The end result is an estimated range (under the European ELTP cycle) of around 700 kilometers, or about 434 miles of range. The Volkswagen all-electric ID 7 sedan’s most interesting feature isn’t its light-up paint by Kirsten Korosec originally published on TechCrunch