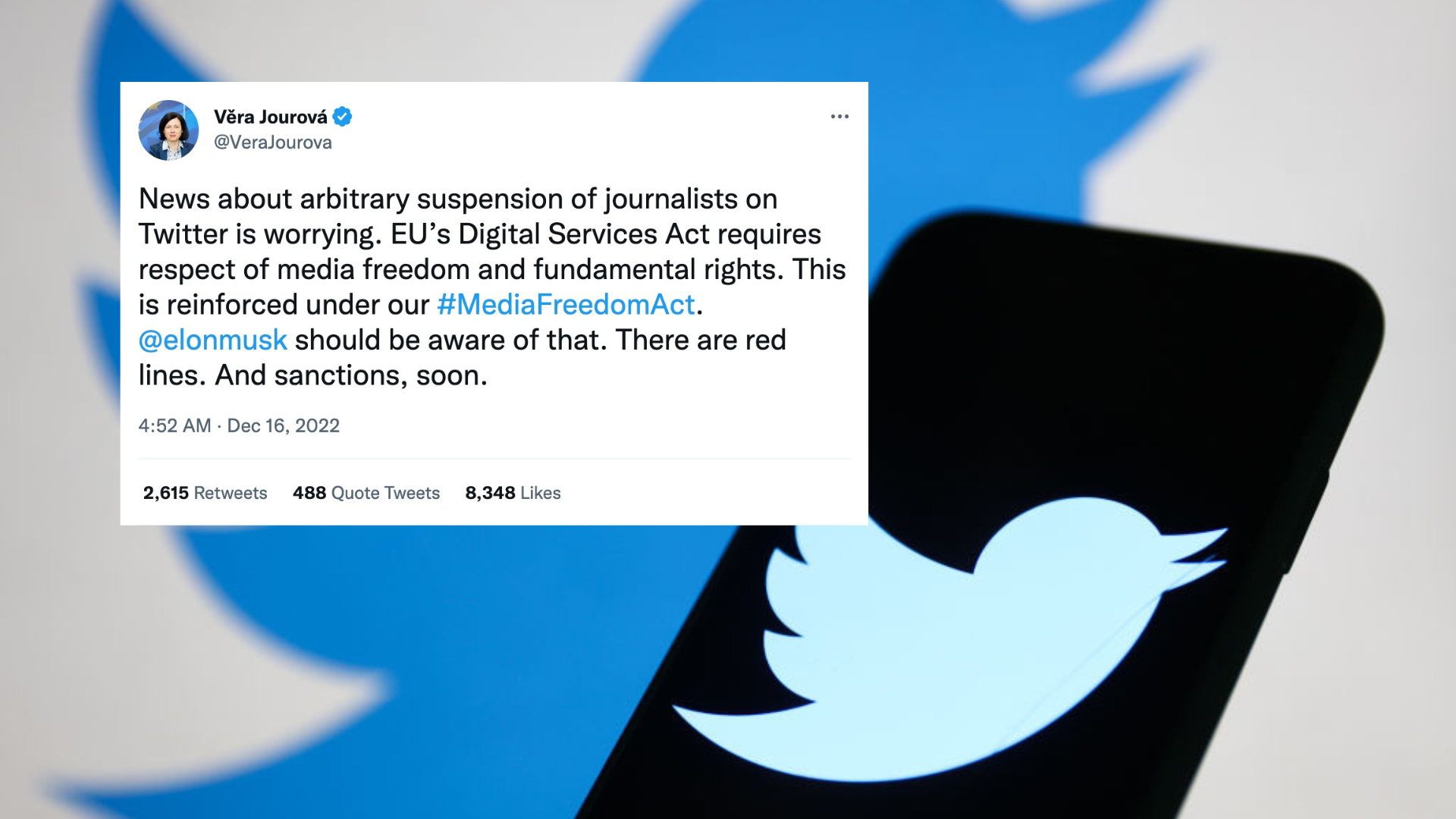 After Twitter suspended several prominent journalists on Thursday night for allegedly violating company policy, the EU says sanctions are on the way. The accounts now temporarily suspended from the platform for seven days include Ryan Mac from the New York Times, Donie O’Sullivan from CNN, Drew Harwell from The Washington Post, political commentator Keith Olbermann, journalist Tony Webster, Micah Flee from The Intercept, Steve Herman from the Voice of America, journalist Aaron Rupar, and Mashable reporter Matt Binder. It was initially unclear what led to the mass account suspension, but Twitter owner and CEO Elon Musk later tweeted, “Accounts engaged in doxxing receive a temporary 7 day suspension,” implying that said journalists had violated Twitter’s safety policy which limits live location sharing, even though they didn’t. Here are the events that led up to this mass suspension:

Then that same day, Musk tweeted that a car carrying his son “was followed by crazy stalker” who “blocked [the] car from moving and climbed onto [its] hood.” In the tweet, Musk said that he was pursuing legal action against Sweeney.

Journalists like Binder who were suspended Thursday night had previously tweeted about Twitter’s handling of the ElonJet account suspension, while some had also shared the official LAPD statement regarding the incident connected to Musk’s son.

Following this series of events, Vera Journova, vice president of Values and Transparency in the EU Commission, threatened sanctions against Twitter, citing the EU’s Digital Services Act which passed in November and will go into effect in 2023. “News about arbitrary suspension of journalists on Twitter is worrying. EU’s Digital Services Act requires respect of media freedom and fundamental rights. This is reinforced under our #MediaFreedomAct,” Journova tweeted. Tweet may have been deleted (opens in a new tab) The “arbitrary suspension” refers to the fact that the tweets from suspended accounts didn’t violate Twitter’s policy. Binder told Mashable he was suspended on Thursday night after sharing a screenshotted tweet from CNN’s O’Sullivan who had just been suspended. “The screenshot was an official LAPD statement regarding the incident Elon Musk was tweeting out about last night which led him to suspending ElonJet and its creator Jack Sweeney. I did not share any location data, as per Twitter’s new terms. Nor did I share any links to ElonJet or other location tracking accounts.”The LAPD statement does not contain any location data and says the following: “LAPD’s Threat Management Unit is aware of the situation and tweet by Elon Musk and is in contact with his representatives and security team. No crime reports have been filed yet.” Tweet may have been deleted (opens in a new tab) In an email to Mashable, EU Commission spokesperson Charles Manoury said, “The Commission will keep monitoring developments as they take place to ensure that once the DSA enters into force, Twitter, like all other online platforms concerned, will follow the rules.” In his statement, Manoury said the Digital Services Act “will apply to all platforms, in particular the big ones, to make sure their power over public debate is framed by regulation adopted by legislators.” One of the DSA’s core objectives is to protect freedom of expression online and to ensure that “terms and condition of platforms are clear, understandable and transparent” and that “users have right of complaint and redress against content moderation decision.”Online platforms that don’t comply with this act might face penalties within the EU, including monetary fines and temporary suspension of service.