Tesla’s robot is a real robot now, not just a guy in a suit 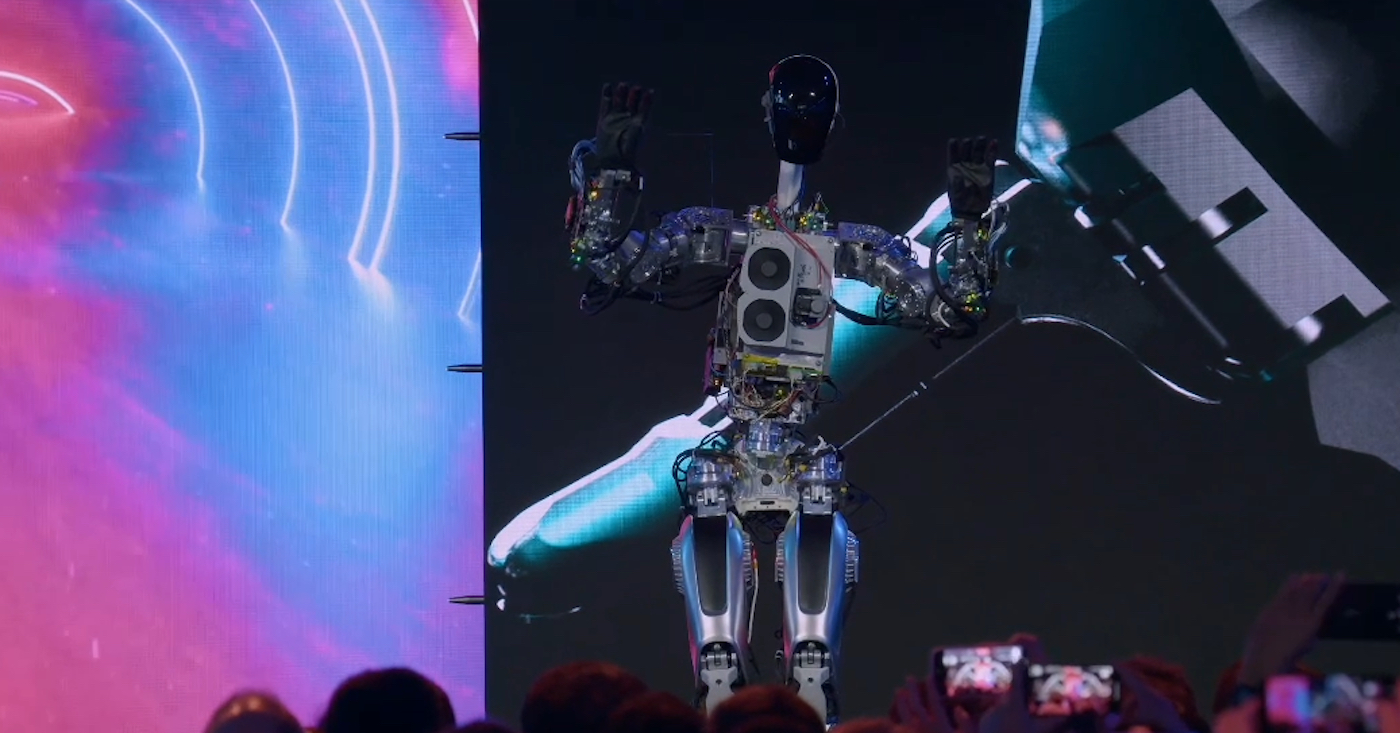 The robot wasn’t a human dressed in a robot costume like last year. Instead, Tesla introduced a functioning robot, albeit with exposed cables and a bit wobbly, at its second annual event. According to Musk, it was the first time it was working without “any support, cranes, mechanical mechanisms or cables.” tesla-bot-gif After a brief turn about the stage, the robot left the stage before the rest of the presentation continued, which included several short videos of the robot (now tethered for stability) carrying a box in an office, watering a plant and lifting a small piece of metal in the Tesla factory in Fremont, California. The aim of the demo and ensuing presentation, in which a number of Tesla employees gave what can only be described as a bipedal robotics 101 course, was to show more progress. (After all, anything beyond a human in a costume could be considered progress). Instead, the event aimed to telegraph where Tesla is headed, shore up confidence in its trajectory and (hopefully) recruit the talent it needs to further the program. Screen-Shot-2022-09-30-at-9.36.15-PM-e1664588984384 Eventually, Musk said the first-gen prototype, which he referred to as Bumble C, will evolve into Optimus. This eventual robot will be able to walk efficiently and stay balanced, carry a 20-pound bag, use tools and have a precision grip for small robots. The Bumble C prototype is outfitted with 2.3 kilowatt hour battery pack, which one Tesla employee said was “perfect for about a full day’s worth of work.” Some of the specs of the robot have changed since last year. For instance, the weigh of the bot has moved up from 125 pounds to 160 pounds. Perhaps the most interesting part of the Tesla bot roadshow, was the repeated reference and crossover with Tesla vehicles. The company said it is leveraging its energy products and using those components for the bot, including battery management. The supercomputer used in Tesla vehicles is also in the Tesla bot. And Tesla is tapping the hardware and software used in its advanced driver assistance system Autopilot for the bot as well. The Tesla bot is also equipped with wireless connectivity as well as audio support and hardware level security features, which the company said are “important to protect both the robot and the people around the robot.” The big looming question is whether all of these efficiencies, once combined in the bot, will result in a scalable robot that works. Of course, Musk thinks it’s possible, going as far to say that he envisions the Optimus will be just $20,000. Tesla’s robot is a real robot now, not just a guy in a suit by Kirsten Korosec originally published on TechCrunch