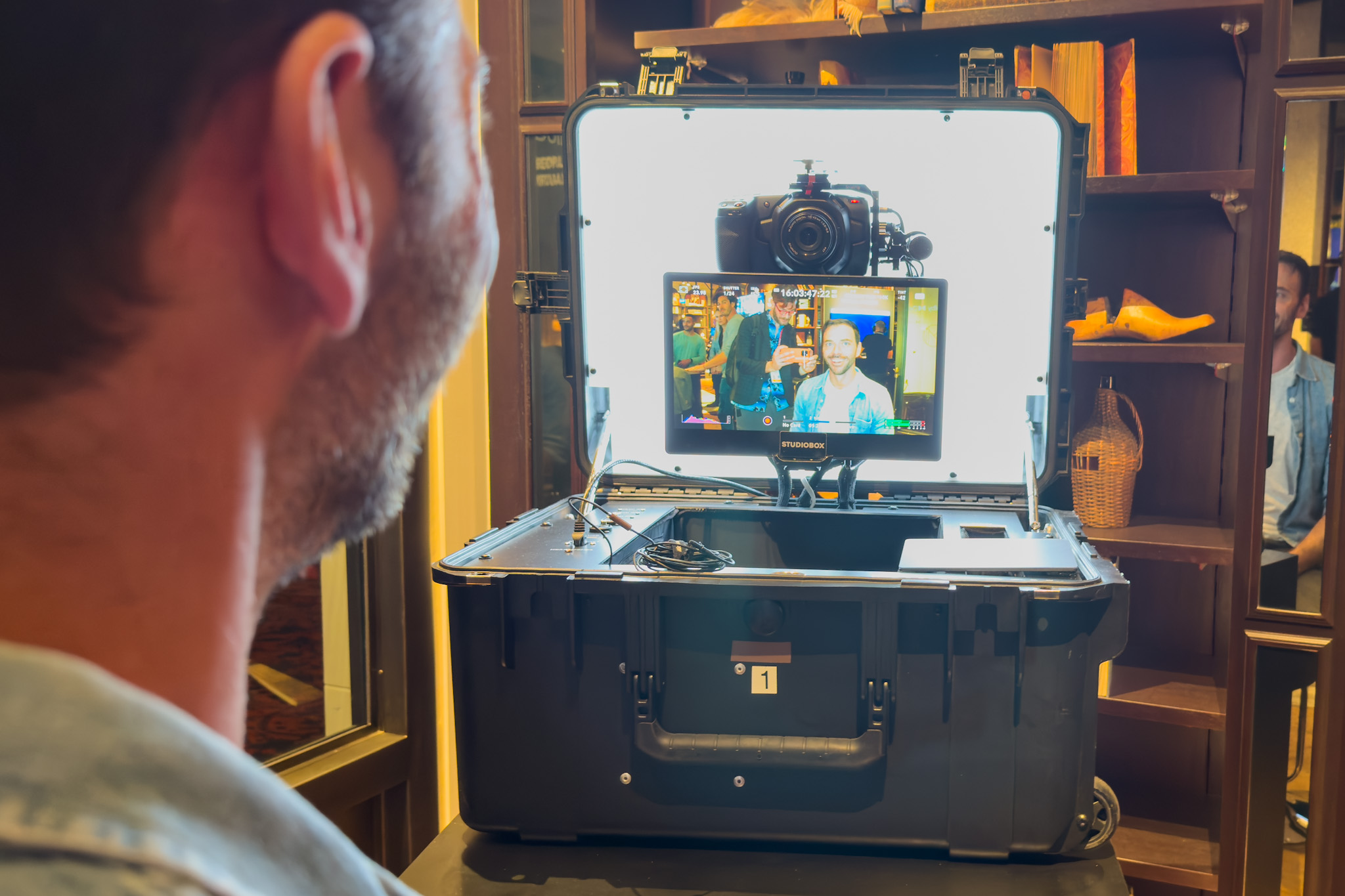 “We are here in Vegas controlling every aspect of the shoot all the camera settings – zoom, pan and tilt, lighting and audio, all from one computer, with one operator,” explains Ian Smith, co-founder of StudioBox, in an interview with TechCrunch at the company’s booth as part of the Dolby.io demo space at CES 2023. “Basically, the software is doing the work of about six crew members. It is great for interviews and talking-head content. Imagine things like newscasters and sports commentators, but also CEOs and top-level executives who want to do internal communication while looking and sounding great,” Smith explains. “I truly believe this box can replace an interview crew.” During the pandemic, the team got its baptism of fire when Amazon decided to reboot the Kids in the Hall TV series. “I grew up watching that sketch comedy show and I was super, super happy to get that call. They needed to do these little two-minute comedic segments with eight different celebrities, that were spread out all over the world,” says Smith. “We just sent boxes to each of them and got that shoot done with a lot of ease. The interviewees very much appreciated it because no crew members were stomping through their houses. That’s an example where crews might otherwise have had to use Zoom – and using our boxes, they were able to get super high-quality content.” IMG_2489

From hardware to software

The company doesn’t want to be in the business of video production, however, and spent most of the pandemic creating a software suite that makes this functionality available to any film crew that wants to create high-quality content remotely. Right now, the company uses BlackMagic cameras and pre-configured boxes, but the next iteration of the software supports more cameras, starting with Sony and Canon. From there, the company wants to make its solution completely hardware agnostic, and put the power of production fully in the hands of its software. The software is still in development, but what the team showed off at CES was deeply impressive. Any number of crew can take control remotely; you can have someone zooming, while someone else adjusts exposure, and a third person adjusts the lighting, while a fourth tweaks the audio, all from the comfort of their wherever-the-hell-people-work-from-these-days. “We haven’t quite figured out the business model yet: there are a lot of potential options. One option might be seats-based pricing tiers where you can hand different permissions to various crew members. I might have a cinematographer and an audio guy here at the same time controlling their respective controls, and you might be paying for those seats. I can also imagine tiers in terms of how much bandwidth you’re going to use for the quality you want,” Smith muses, without committing to anything specific quite yet. “We have a lot of testing to do over the next three months to figure out that pricing structure, but we’d love to do a subscription model where you’re getting a box and the software all as a subscription package. A lot of people that don’t necessarily want to own the gear but want to take advantage of the cost savings of having a box.”

Collaborative editing and post-production is a well-worn path in the film and TV world, but the production itself has seen a lot less innovation over the years. “Editors can collaborate together from anywhere and tap into virtual machines and use tools like DaVinci or Frame.io to work together. Nobody has really done anything to create the content for production,” says Max Ostrove, another of StudioBox’s co-founders. “Nobody has done real-time video collaboration from anywhere in the world, with remote access to gear. Traditionally on a film set you have one person running a camera. I’d be running the lights. We’re having a conversation, as we dial things in. This is the first time a single piece of software is talking to all of these things at once.” The company hired Ali El-Shayeb, who previously founded Nugget.ai, to take the helm of the technology at StudioBox as its CTO. He is using his AI background, and StudioBox’s ultimate goal is to create a fully AI-driven production workflow. “Part of the future plans and what we were excited about is the AI. Automation of the lights and the cameras and audio too. AI is getting very good about being able to isolate the sound of my voice even though the microphones 10 feet away, in real time, so all that technology is getting better and better and better,” Ostrove explains. “That’s one of the benefits of working with Dolby.io – we can actually tap into their enhanced audio API. We were able to start using things like noise cancellation and applying pop filters – all virtually.” The ultimate goal is to let the AI dramatically save the amount of time it takes to set up and create high-quality video content. “We are currently using AI to stream content in real time and optimize the content as we are streaming it, using Dolby’s APIs,” explains El-Shayeb. “There are several hundred data points that we are planning on tracking in the background. They all contribute to features we use to build scalable data pipelines for production. I think what’s really unique about what we’re doing, is that all of this happens in the cloud. This is not a local solution. Just being able to do that in real-time and stream all those data points and do all those computations to be able to optimize everything. For example, making my voice sound better, controlling the camera’s parameters, or optimizing the lighting.” El-Shayeb points to the cornucopia of sliders in the company’s software. They control every aspect of the video setup we are looking at and suggests that if he has his way, the AI robot overlords will be moving the sliders, whether to help or replace an operator.

Even with the best will in the world, internet connectivity can be flakey, but the company has gone a fair way out of its way to ensure that recording can continue even if a location has poor internet connection – or none at all. “I think that’s one of the reasons why controlling actual hardware is unique is because an operator can trigger a recording on the camera,” Ostrove says. “If the internet drops out momentarily, perhaps the remote viewers see a loss of resolution, but that won’t affect the camera at all, and the final result still looks perfect.” “We did a shoot at a hospital where we couldn’t get the up and down speeds ahead of time. We knew we might be walking into craziness,” Smith says, laughing, and described that the upload speed turned out to be 0.1 Mbit. That isn’t even enough for a Zoom call, let alone a high-quality video production. “I mean, you can look at the footage. It’s great, and I’m very proud. It’s very clean. You can run this whole thing locally, too, without any internet at all, in a pinch. We’ve done that.” The company is at CES looking for customers, partners, and its first round of institutional investors. The software suite will launch in the spring this year. ces-2023-banner-59 Studiobox is a remote video team’s high-def dream by Haje Jan Kamps originally published on TechCrunch