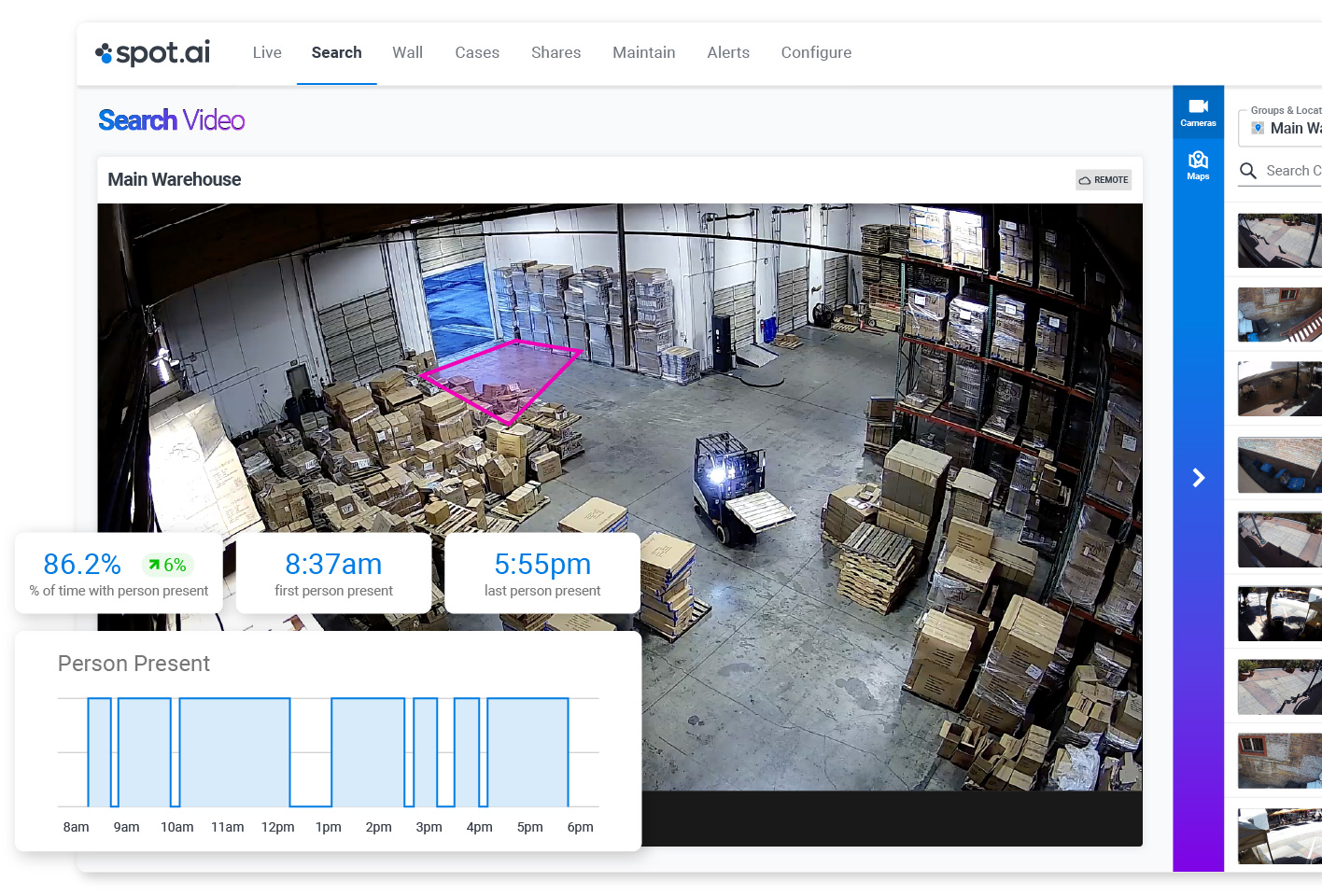 Scale Venture Partners is leading the round, with past backers Redpoint Ventures, Bessemer Venture Partners, and new investors StepStone Group and Modern Venture Partners also investing. This brings the total raised by Spot AI to $63 million. Spot AI, appropriately for a security camera company, existed in stealth for years before it came out into the public in 2021: at that point it had already raised $22 million. As with that round, Spot AI is not disclosing its valuation, but Tanuj Thapliyal, Spot AI’s CEO, noted that it is a “significant up-round” based on the fact that in the last 12 months, the startup’s revenues have grown fivefold, and that customers — it has “thousands” in the U.S., both small businesses and large enterprises across some 17 industries, which aren’t really those that include “knowledge workers” per se but businesses in areas like manufacturing and retail that have critical physical components and a lot of activity — have tripled in the same period. Its customers have included SpaceX, transportation company Cheeseman, Mixt and Northland Cold Storage. And it turns out that giving people a better reason for using their video cameras makes them much more interested in using and looking at that video data. “People are using our cameras a lot,” Thapliyal said in an interview. “Forty percent of our month active users log in every day. There is value to be had here.” Fundraising has gotten very challenging recently, but Thapliyal said that the San Francisco startup hasn’t seen that itself in part because of those growth numbers, and also because it’s bringing something different to market. CCTV and other security cameras have become as ubiquitous as electric lighting in many workplaces these days, especially those with high traffic. Spot AI estimates that since 2015 the number has doubled and now stands at 1 billion devices globally. In many cases, cameras are networked and link into bigger systems where footage can be viewed by security teams. But that’s typically where a lot of the usage ends, and so that is where Spot AI is hoping to pick things up. Spot AI provides a few different levels of service: for customers that already have networked cameras, they can integrate these with Spot AI’s platform so that it can start reading and parsing the video data. Those that either don’t use cameras already or that don’t have networked systems, or want the full system as envisioned by Spot AI, can potentially use free hardware built and provided by Spot AI itself. That system is based around technology that uses computer vision and other AI both in the cloud and at the edge (eg, if using Spot’s own cameras) to monitor video across security parameters, but also others around safety and efficiency and movement overall. What is monitored, and where, is set up by customers themselves by way of a drag and drop interface that lets them select specific items or areas in a frame, which the system can then analyze across a specified range of time for changes and other kinds of activity. One scenario Thapliyal described how a car wash was using its system to help resolve damage claims by pinpointing video to identify when and were, and if, damage was done during a carwash to help those claims move along. Another you could imagine could involve helping a store determine where customer assistants are spending time and where, and if they could be better positioned at different times of day. Longer term, there are some interesting opportunities for Spot AI’s platform that it’s not already pursuing, specifically in the consumer segment. Thapliyal said that selling direct to consumers — for example, building on the market created by the likes of Ring for cameras to track who comes to people’s front doors — is not one that it wants to pursue, but that there could well be an opportunity for working with businesses that in turn work with consumers. Thapliyal — who co-founded the company with Rish Gupta and Sud Bhatija — believes that with all of these, the opportunity of actually making that video useful is the route to making the video less creepy and indeed less idle. “If you make the video data [produced by these cameras] more useful and accessible to more people in the workplace, then you transform it from this idea of surveillance to the idea of video intelligence,” Thapliyal said to me in 2021. “It can help you make all sorts of important decisions.” As I said before, its ethos seems to come out of the idea that these cameras are here, so we need to find better ways of using them more effectively and responsibly. That has definitely carried the company up today and is helping shape future strategy. “For a company like ours to have impact we have to be really specific in our purpose,” Thapliyal said to me this week. One interesting scenario where Spot AI could have a place, for example, is in the area of connected cars, where carmakers might want to tap into the trend for dashcams that drivers use to help them potentially make claims in the event of accidents: many cars already have cameras built into their vehicles, but no additional ability to parse or use that video data beyond the immediate purpose of, say, helping people park. “The product usage and engagement Spot AI has seen in its customers over the past year since launch is a testament to the unique software they’ve built and the velocity of their product engine,” said Jeremy Kaufmann, a partner at Scale Venture Partners, in a statement. “There is a massive opportunity here and we’re excited to partner with Spot AI as they continue unlocking the value of video data.” Spot AI raises $40M to build smarter CCTV security camera tech by Ingrid Lunden originally published on TechCrunch