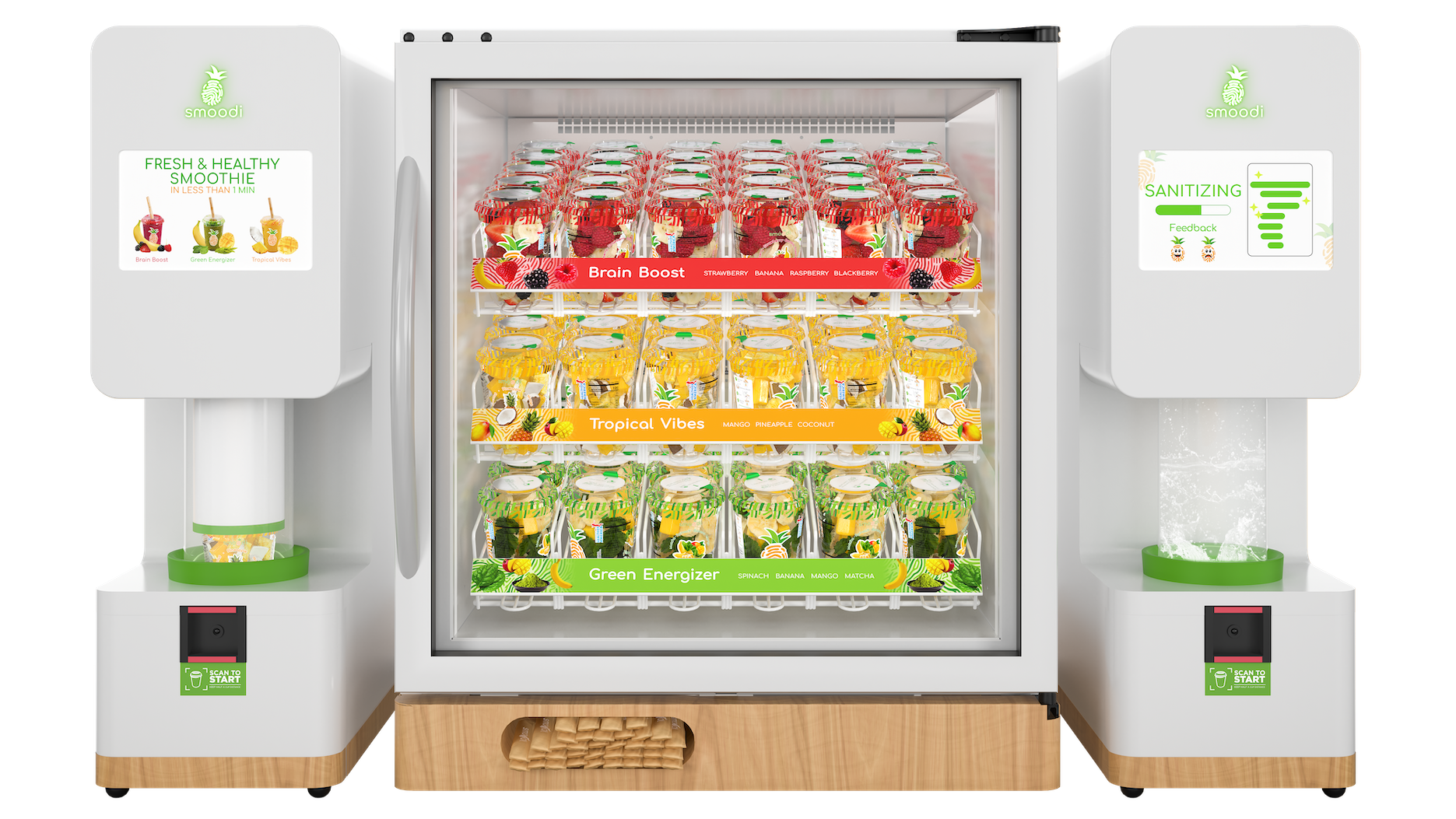 Incubated out of Harvard’s Innovation Lab in 2018, CEO Pascal Kriesche and Morgan Abraham call their company a “healthy smoothie store-in-a-box” that is essentially a robot that mixes fruits, vegetables and add-ins like protein into a smoothie. Robot food and cooking machines aren’t new… remember Chowbotics and Miso? However, Kriesche touts in an email interview that smoodi’s beverage vending machine not only self-cleans, it is also not the traditional “black box,” but is transparent so that customers can watch the frozen ingredients travel through the blending process and even watch the machine clean itself. Smoodis range in price from $5.99 to $7.99 and come in flavors like Brain Boost, which is banana and berries; Green Energizer, made of spinach, banana, matcha and mango; and Tropical Vibes, which includes pineapple, mango and coconut. Since its commercial market launch in 2021, smoodi grew its revenue by 25% monthly and had zero churn, with some convenience store chains asking for additional deployments following the initial pilot, Kriesche said. He forecasts 5x growth for 2023. “This is a testament to our valued customer base who have recognized the shifting market trend in consumer’s demand for a healthy and delicious product,” he said. “The smoothie market has doubled over the last five years, and the trends for fresh, healthy and vegan are only accelerating.” Leading the new $5 million Series A investment is a group formed by Keith Canning, a former distributor. Joining him were FCP Ventures, UnderscoreVC, Allston Venture Fund, WSPR Fund, Phoenix Club and a group of angel investors, including the former Nespresso president Frédéric Levy and Blue Rhino founder Billy Prim. Kriesche and Abraham are deploying the new capital into scaling smoodi nationwide. That has so far included adding to the executive team with a chief revenue officer and chief operating officer, as well as regional managers, and scaling up production capacity of both equipment and consumables and go-to-market. The company’s production capacity is already at 200 units per month, and Kriesche expects consumables to grow 10x in the next six to nine months. Smoodi is already in convenience stores, offices, restaurants and other retailers, but along with the investment, the company has a new partnership with food distributing giant Dot Foods. Not only will this move help smoodi expand beyond convenience stores, but Dot Foods will eventually take over smoodi’s equipment distribution and enable the company to launch in new sites across North America in two days versus the three weeks it currently takes, Kriesche said. Next up in 2023, the company plans to introduce new flavors, continue R&D on its machine to automate its drink booster dispensing and will test smoodi in Europe. “We plan to get into thousands of locations through Dot Foods in the next 24 months and many more thereafter,” Kriesche added. “The biggest challenge in scaling a business like ours has always been the frozen supply chain. With Dot Foods, we have a partner that excels at that and has the best coverage in the food industry.” Smoodi closes $5M to expand reach for its robotic smart blender by Christine Hall originally published on TechCrunch