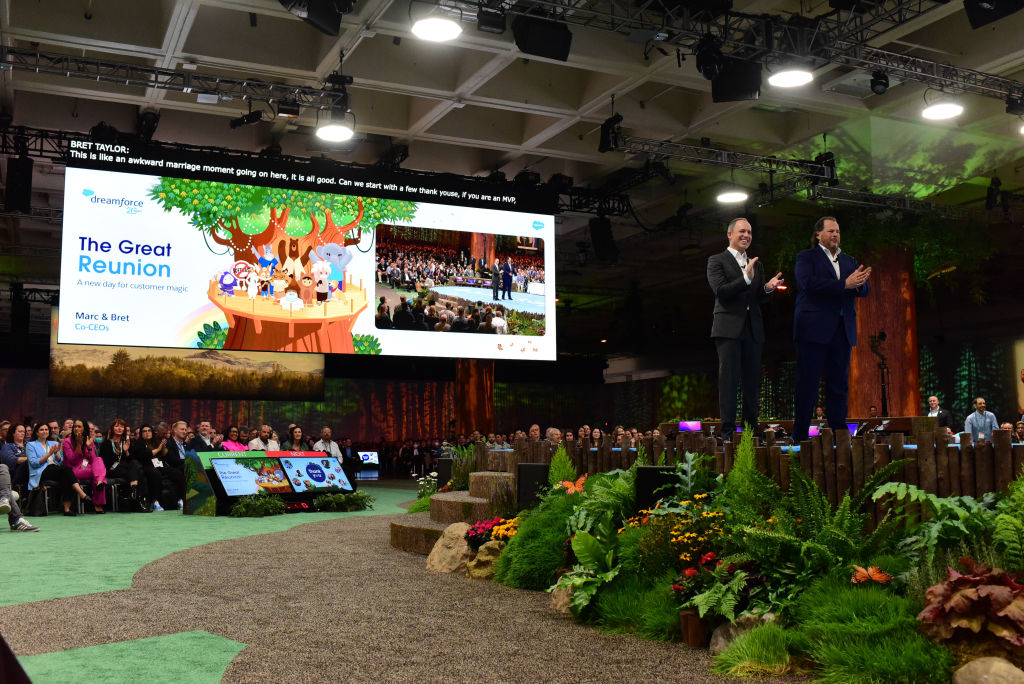 With the Salesforce event back live and in person this week, just in time for its 20th anniversary, everyone seemed to be happy to be together at a live event. With a reported in-person attendance of 40,000, it was significantly smaller than the peak pre-pandemic numbers of over 150,000, when every hotel in San Francisco would sell out, but it was still substantial. And if you count the 110,000 who watched some part of the event online (including myself), you could argue it was about the same. At a press conference this week, Salesforce co-CEOs Marc Benioff and Bret Taylor certainly welcomed the opportunity to speak to folks again in person, whether that was customers, analysts, investors or the press. They said because Salesforce had grown so significantly since the last in-person Dreamforce, it was actually also the first time for many of the company’s employees to attend. While it might not have the numbers of live attendees of years past, there were still celebrities aplenty, including Matthew McConaughey, Jennifer Hudson and Bono. There was also Magic Johnson, Jane Goodall and Al Gore, to name but a few of the luminaries who showed up. Dreamforce always has star power, and the company didn’t skimp on its first in-person gathering in three years. And the live musical event — which in the past has featured A-list bands like U2 and the Foo Fighters — this year was the Red Hot Chili Peppers. And of course, it wouldn’t be Dreamforce without co-founders Benioff and Parker Harris goofing it up on stage, highlighting whatever new tech the company was introducing. As you might guess, it wasn’t all fun and games and pageantry. There were also some significant announcements. Let’s have a look at some of the highlights, shall we?