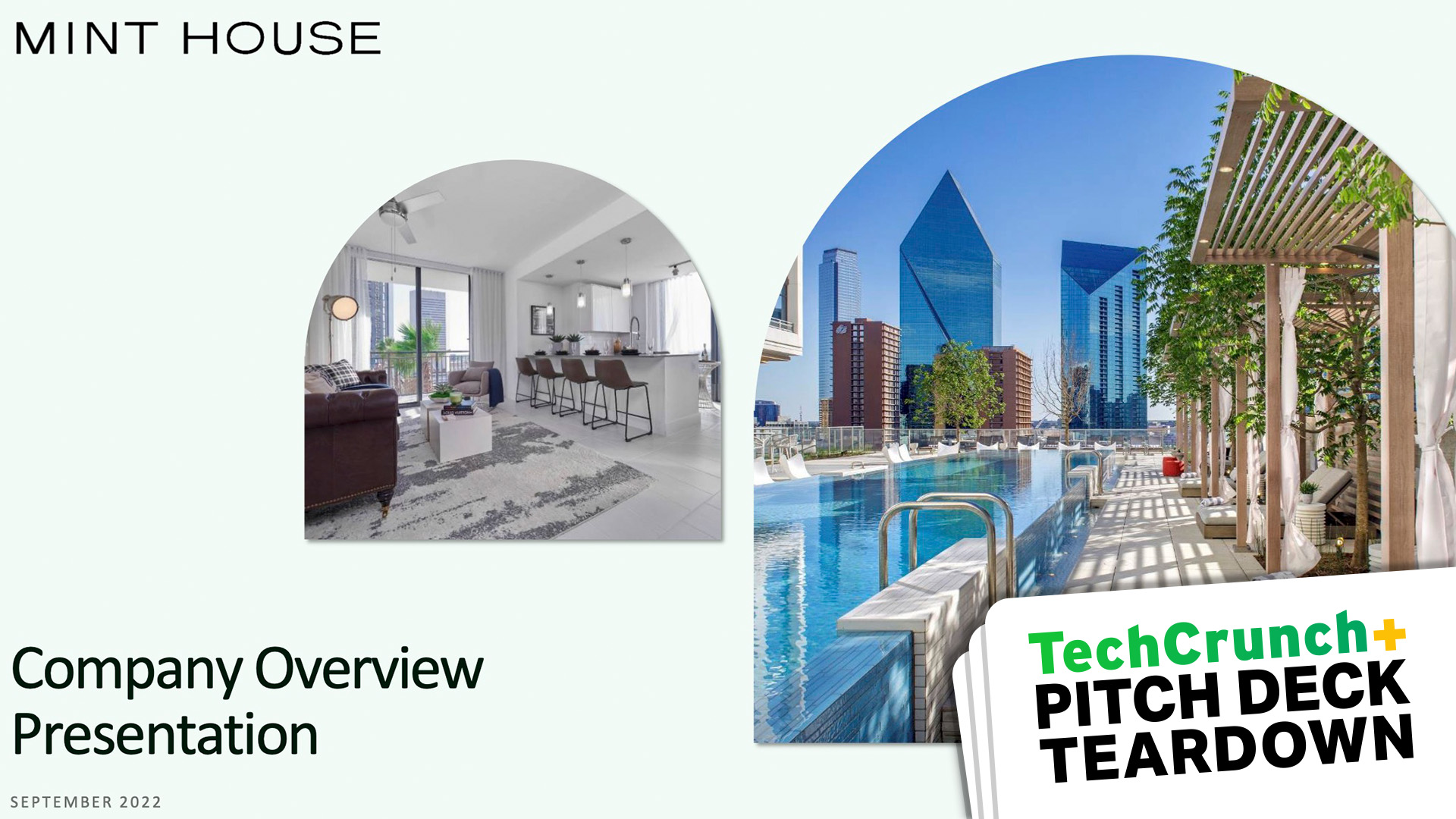 Under the slogan of “The comfort of home. The luxury of a hotel. Tech-enabled and tailored to you,” the company is trying to make being away from home a bit less crappy. Targeting high-end business and leisure travelers, Mint House recently raised a $35 million Series B from Mohari Hospitality, with participation from Revolution Ventures, Allegion Ventures and Ingleside Investors. In this teardown, we’ll take a closer look at the deck the company used to land its Series B. We’re looking for more unique pitch decks to tear down, so if you want to submit your own, here’s how you can do that.

MintHouseSeriesBPitchDeckTechCrunchPitchDeckTeardown-Slide-2 I wish it also mentioned how much money it was raising, either here or on the cover slide — but apart from that, this slide is a beacon of perfection. As a startup founder, the thing you can learn from this slide is how to get an investor filled in on the context for the company and the round at hyper-speed so you can focus the bulk of your pitch on the things that really matter: What you’re raising, what your plans are and where the market is going. This is particularly important for later rounds — dwelling on the past is important only to prove that you know what you’re doing. Investors are investing in what’s going to happen next, after all.

Front-load the longest pole in the tent

As a startup founder, you can probably predict what the biggest challenges are for the company you are about to pitch. In the case of Mint House, the third slide says something about what the company has been pushing against when it comes to investment. Hotels can be a lucrative business, but the business model is well-trodden ground. The company is promising to innovate on that model, and to investors, that’s both the biggest risk and the biggest opportunity. MintHouseSeriesBPitchDeckTechCrunchPitchDeckTeardown-Slide-3 As a startup, what you can learn here is how to differentiate yourself from a wall of incumbents. If you cannot, well, you essentially don’t have a business at all.

Show me the numbers!

MintHouseSeriesBPitchDeckTechCrunchPitchDeckTeardown-Slide-6 The fact that this slide is here is great and encouraging — but investors are going to be looking very closely. Operating profit margin, revenue per available room, and occupancy numbers are crucial for the operating side of the business. In other words: If you are in charge of growing and developing Mint House for the next three months, those metrics are crucially important. However, those aren’t necessarily the metrics investors care about. I’d have expected to see graphs here, including revenue, occupancy over time, and perhaps customer acquisition costs and other metrics that show what’s happening under the hood. Operational efficiency and cash flow might be another set of metrics worth a closer look. The kind of metrics an investor would care about are directly linked to the fundraise itself. You’re raising $35 million? Great. Show what you’re going to do with the money and what the major milestones are for the next six to 18 months in the form of an operating plan. There’s a deep orange, if perhaps not red, flag here, too, though: The net promoter score is represented as a percentage, which is incorrect. NPS is an absolute number ranging from -100 to 100, calculated using a formula you can find on every growth-hacking blog that ever existed. The fact that the founders (and everyone who looked at this deck) didn’t catch that — along with the strangely not-quite-right selection of metrics above — makes me wonder about the quality of the overall team. Where my mind goes here is whether the team is made up of tech startup founders or hotel operators. Nothing wrong with being the latter, but Airbnb is able to run with much better profit margins than someone who is operating a suite of dozens of brick-and-mortar buildings. I’m not saying that this wouldn’t be a good investment, but I question whether it makes sense as a VC investment. In the rest of this teardown, we’ll take a look at three things Mint House could have improved or done differently, along with its full pitch deck— and that big red flag I mentioned earlier.

Three things that could be improved

As good as Mint House’s pitch deck is, there are a few things that made me scratch my head — some mistakes that are serious enough that I was kinda curious how the company was successful in raising at all, if I’m being honest. Let’s take a look.