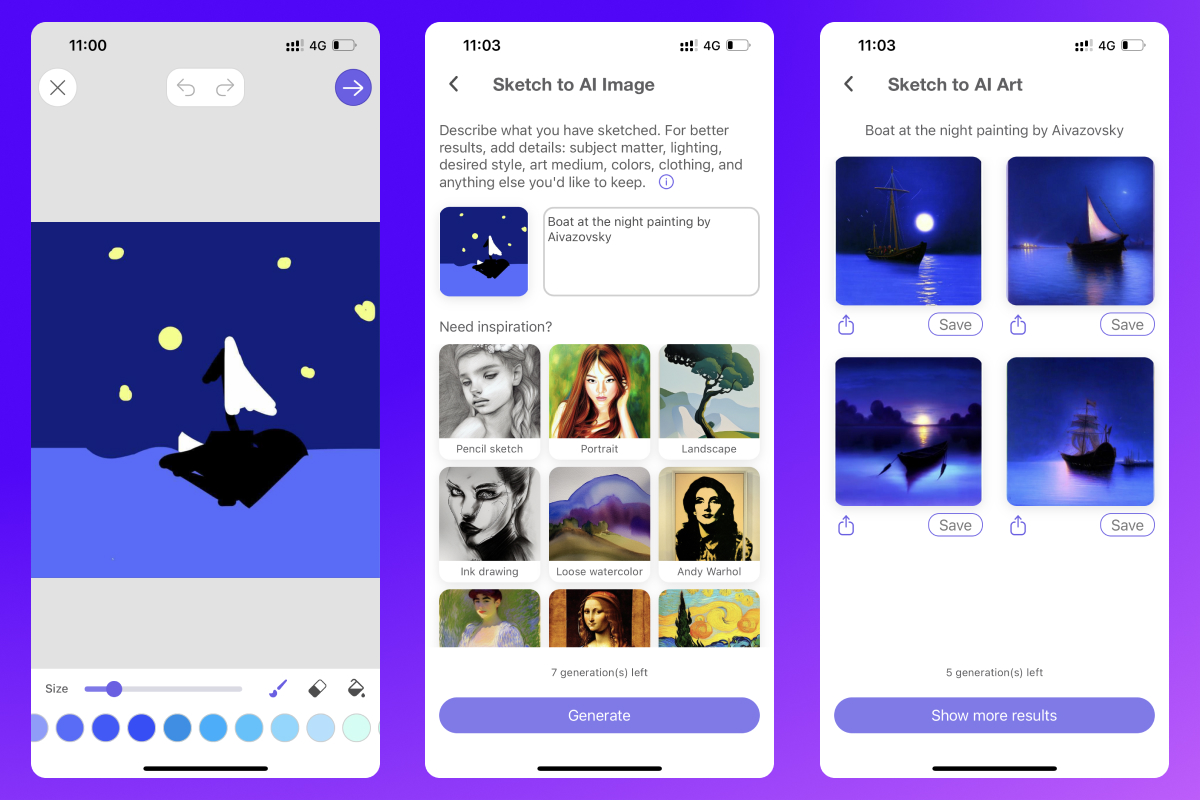 SketchAI is easy enough to use. It features several pre-selected styles that can applied to creations, including ink drawing, pencil sketch, and the artist-inspired “Da Vinci” and “Van Gogh.” In addition to sketching or uploading a photo, users can add a prompt describing an image (e.g. “Boat at night pointing by Aivazovsky”) to enhance the generated results. SketchAI offers five free creations. Unlocking unlimited generations requires a subscription ranging from $5.99 per week to $17.99 per month or $69.99 per year. “We’re planning a lot in the way of making the user experience, processing and image quality better, and adding more prompts and artistic styles,” Picsart VP of product Lusine Harutyunyan told TechCrunch in an email interview. “We’re also thinking about adding features for the user to enhance and play with their results, as Picsart is known for its powerful and fun editing tools. Along with building on our main platform, we’re excited to offer more unique entry points for creative technologies like this.” SketchAI joins Picsart’s roster of generative AI tools including AI Avatar, which makes custom AI-generated profile pics from selfies, and arrives as art-generating AI apps attract controversy both from users and the artistic community. Lensa’s recently-launched, viral avatar creator came under scrutiny for its biases toward the sexualized depiction of women. Meanwhile, on the art portal ArtStation, which earlier this year began allowing AI art for the first time, members widely protesting by placing “No AI Art” images in their portfolios — asserting that AI-generated art threatened the artistic integrity of the platform. Before-after-2 Harutyunyan didn’t deny that generative AI systems have their issues, even admitting that the system driving SketchAI — an open source model called Stable Diffusion — could reproduce biases in the artwork it creates. But he argued that SketchAI and generative AI as a whole will evolve and improve over time as more people use the tech and additional models become available. “These are very early days for generative AI as a whole and this technology will continue to evolve quickly and we will continue to adhere to industry standards and best practices as it does. Our goal is to empower creators and we support artists everywhere,” Harutyunyan said. Stable Diffusion, which is trained on images from around the web, including from art communities, has spread like wildfire in recent months. Lensa and DeviantArt use it to generate images, as does game developer Latitude and countless others. Most of the use cases are harmless enough. But some groups have wielded Stable Diffusion to create objectionable content like depictions of violence and pornographic, nonconsensual celebrity deepfakes. Stability AI was even the subject of a recent critical letter from U.S. House Representative Anna G. Eshoo (D-CA) to the National Security Advisor (NSA) and the Office of Science and Technology Policy, in which she urged the NSA and OSTP to address the release of “unsafe AI models” that “do not moderate content made on their platforms.” Harutyunyan says that Picsart fine-tuned and optimized Stable Diffusion for “quality, original image strength” in SketchAI and put filters in place to prevent some “unsafe” art from being generated. Picsart hasn’t, however, established a way for artists who don’t wish SketchAI users to create art in their distinctive styles to “opt out.” In recent months, artists like Hollie Mengert and Greg Rutkowski — whose names have become some of the most commonly used prompts in Stable Diffusion-powered apps — have decried what they see as poor AI imitations that are nevertheless tied to their work. Before-after-6 Stability AI, the startup largely funding the development of Stable Diffusion, recently bowed to pressure, signaling that it would allow artists to opt out of the data set used to train the next-generation Stable Diffusion model. Harutyunyan says that Picsart will consider adopting the model for SketchAI once it’s released. “The baseline model we’re using is trained on data, not specific material and not reproducing a specific artist’s work,” Harutyunyan said. A word of warning to those who’d share their SketchAI creations publicly, though: Picsart says that it can’t guarantee users will be able to claim copyright over them. That’s because the copyright status of AI-generated artwork is somewhat in flux at the present. The U.S. Patent and Trademark Office (USPTO) recently moved to revoke copyright protection for an AI-generated comic, saying that copyrightable works require human authorship. And a class action lawsuit working its way through the U.S. court system alleges that generative AI violates intellectual property laws by regurgitating portions of the copyrighted data used to develop it. The copyright issue has spooked platforms like Kickstarter and Getty Images, both of which in recent months have banned — either partially or fully — AI-generated art and tools to create it out of fear of the legal ramifications. “As between Picsart and the user, the user owns the rights in the content,” Harutyunyan said. “However, users should be aware of the inherent limitations that come along with generative AI.” Picsart’s AI-powered SketchAI app turns images and outlines into digital art by Kyle Wiggers originally published on TechCrunch