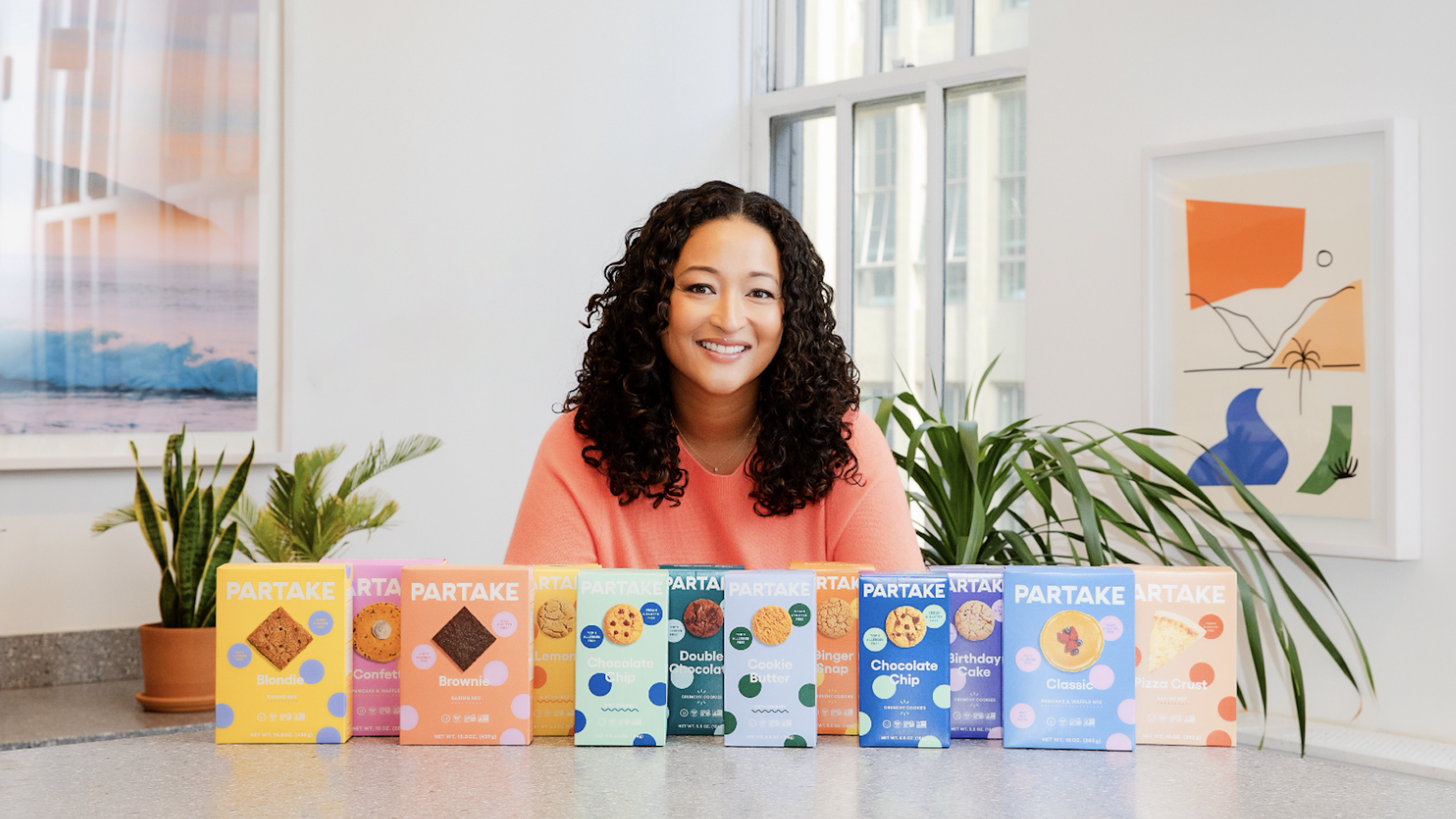 “I was really frustrated with what I couldn’t find for her,” Woodard told TechCrunch. “From a brand perspective, I thought about how she would always feel left out at all the social events that involved food, like playdates and birthday party celebrations.” She also didn’t feel like the brands in the allergy-friendly space were doing a wonderful job at reaching consumers outside of the allergy-friendly space. Having worked with emerging brands at Coca-Cola, she decided to try it herself. So in 2016, Woodard left Coca-Cola to start what she called “a cool allergy-friendly brand that tastes good and has ingredients you feel good about.” That became Partake Foods. The New York–based company, self-funded and self-distributed, launched with three flavors of cookies that Woodard sold out of the back of her car. Fast-forward to today, Woodard’s daughter is 7 years old, and the company has added baking mixes and pancake and waffle mixes to its product line of cookies that come in a variety of flavors, including chocolate chip, birthday cake and ginger snap. The U.S. snack food market was valued at $117.1 billion in 2021 and is expected to grow over 3% annually through 2030. Along with that growth, the healthier-for-you snack space has become a crowded one over the past few years as consumer buying behavior has shifted. Then came venture capital interest. For example, N!CK’S, Starday, The Naked Market, SnackMagic, Spudsy, Planet FWD, Noops and Mid-Day Squares all carved out a slice of the millions of dollars in funding pumped into this sector over the past year. While some startups entering this better-for-you snack space are attempting to help those with food allergies, Woodard said Partake Foods is still unique in this respect that it has made allergy-friendly its mission and “at the core of who we all are and that won’t ever change.” “How we test the products, where we make the products at a top nine allergen-free facility and the fact that we’re able to check all of those boxes and it tastes good, I think we still have some differentiating points,” she added. Partake Foods itself took in $4.8 million in Series A funding in late December 2021 and is now back with an even bigger slice of $11.5 million in Series B funding, which Woodard said is one of the largest raises by a Black woman for a food and beverage company. New investors include Cleveland Ave’s CAST US fund, Fearless Fund, Supply Change Capital and Kaya Ventures, and join existing investors Marcy Venture Partners, CircleUp Growth Partners, Black Star Fund, FF2032 and Black Capital. The new investment, which closed earlier this year, gives Partake Foods $19 million in total fundraising to date. Though Woodard declined to disclose the company’s valuation, she did confirm that it increased with the Series B. The company wasn’t initially focused on raising additional funding. Woodard said she had plans around continuing to expand distribution and new innovation but decided to do the round, when investors came knocking, so that Partake Foods was able to support that growth. Distribution has taken off: Partake Foods’ products were in about 5,000 stores at the end of 2021, and that has grown to 9,000 stores, including a presence in Target, Whole Foods, Walmart and Kroger, Woodard said. Revenue grew 200% between 2020 and 2021 and 100% between 2021 and 2022. Meanwhile, it also ranks as the No. 2 “allergy-friendly brand in the U.S.’s natural and enhanced channel ranked by dollar growth,” according to SPINS. The company’s products can be found on American Airlines flights and in certain offices. “We’ve heard from our consumers that they want to be able to find us in more places besides the grocery store aisle,” she added. “We are working on different channels where we can meet our consumers where they live, work and play.” The new funding has enabled the company to grow employee headcount from one employee in 2020 to 20 in 2022, including a new head of operations and new head of retail sales. More hiring will follow next year as will more marketing efforts, new products, including seasonal flavors, a new product category and partnerships with national brands that will continue the company on a path for distribution beyond the grocery store. In addition to Partake Foods, Woodard leads the Black Futures in Food & Beverage fellowship program, which starts its next cohort today. The program works with upperclass students enrolled in historically Black colleges and universities interested in a career in the food and beverage industry. “I’m excited to see Partake Foods really come into its own as a national brand,” Woodard said. “You’ll continue to see distribution that will make us accessible to consumers all over the country. I’m also excited to increase our brand awareness as more people find out about the product and continue to lean into this mission of radical inclusivity so we can hopefully change the face of what the food industry looks like and make it more inclusive.” Partake Foods whips up new allergy-friendly products following new cash infusion by Christine Hall originally published on TechCrunch