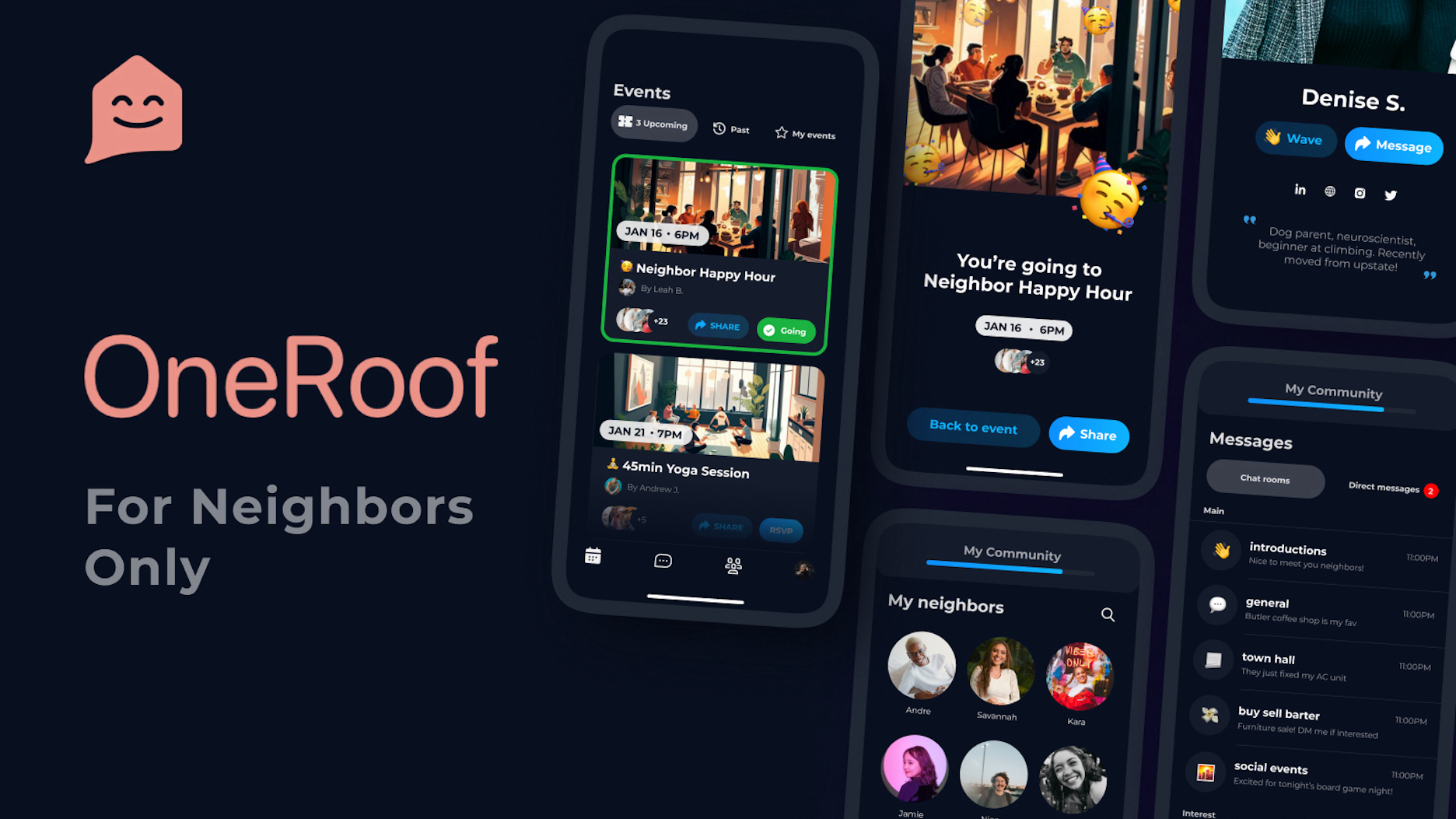 The pre-revenue company has grown up a lot since we profiled it in 2021 after OneRoof secured $1.25 million in funding. At the time, CEO Selin Sonmez told TechCrunch that the app was live in 400 buildings in New York City, and today that has increased to over 40,000 active neighbors across 1,300 buildings in New York and Miami. OneRoof has also done a soft launch in Dallas, she added. If you are trying to picture how OneRoof works, Sonmez says the company is often compared to NextDoor. It helps people who live in the same apartment building to connect, network, exchange info, buy and sell items, help with pets, meet in real life and create a sense of community. The free app relies on what Sonmez called “a community of champions” known as Super Neighbors — essentially the people in your apartment building who “act as a glue to their community,” she said. From that position, they are able to gain access to neighbor event sponsorships, join the exclusive Super Neighbor Club in their city and share feedback with OneRoof for future app development. Missing Attachment “‘Super Neighbors’ are a critical, yet neglected social circle,” she added. “Nobody knows who their neighbors are, so we are building an essential social tissue in society. Our long-term mission is to unify and empower neighbors under OneRoof and to create more resilient urban cities, both socially and economically.” In 2021, OneRoof was just a chat room app where neighbors could talk to each other digitally. Since then it has morphed to include an in-person events feature, improved user profiles to highlight interests, a neighbor directory and a “grow” feature to help people create their own communities. The concept seems to be appealing to apartment dwellers: In Super Neighbor buildings, OneRoof saw over 78% of users continue using the app after 12 weeks, and over 65% continue using after 24 weeks, Sonmez said. In addition, three times the in-person events, including happy hours and meeting someone for a workout, were created on OneRoof in the fourth quarter compared to the previous quarter. The company has continued to grow, receiving between 30 and 40 Super Neighbor requests per day, and observing a 20% month over month increase in users. To be able to onboard them, Sonmez and co-founder Nikos Georgantas needed to grow their team so they made the decision to go after a new round of funding. This was during the spring and summer, however, when the venture capital market was slowing down. As a result, Sonmez said she had to manage not only some difficult decisions, for example, slashing the marketing budget by 90% to keep OneRoof’s existing team in place. She had close to 80 investor meetings during this time and even had to field some unexpected questions. “We were suddenly being asked questions around revenue which wouldn’t be the case for social startups our stage before the markets shifted, so it took us time to find the right partners,” she added. “There was also market ambiguity around pricing, so we didn’t price the round until there’s more clarity.” Eventually, Sonmez found good investment partners and closed on $3.2 million in seed funding to give the company $4.45 million in total funding. Chamaeleon led the round and was joined by Dream Machine, Gaingels, General Catalyst, The Helm and a group of angel investors, including Margo Georgiadis at Synetro Group, former Andreessen Horowitz investor D’Arcy Coolican, Google Maps co-founder Lars Rasmussen and Elomida Visviki. The funding enabled OneRoof to add four new employees and is currently looking to fill two more roles. Sonmez also plans to invest in app development, software, sponsorships and marketing. Regarding the company’s current big milestones around engagement and retention, OneRoof has gained a lot of ground, but Sonmez still has much she wants to accomplish. “We want to do more,” she added. “There’s hundreds of millions of people living in this country, and we want to make sure that we can grow our products and put them in the hands of anyone who has a neighbor who thinks, ‘Oh, I wish I knew who they were.’” OneRoof grabs funding to help apartment dwellers cozy up to their neighbors by Christine Hall originally published on TechCrunch