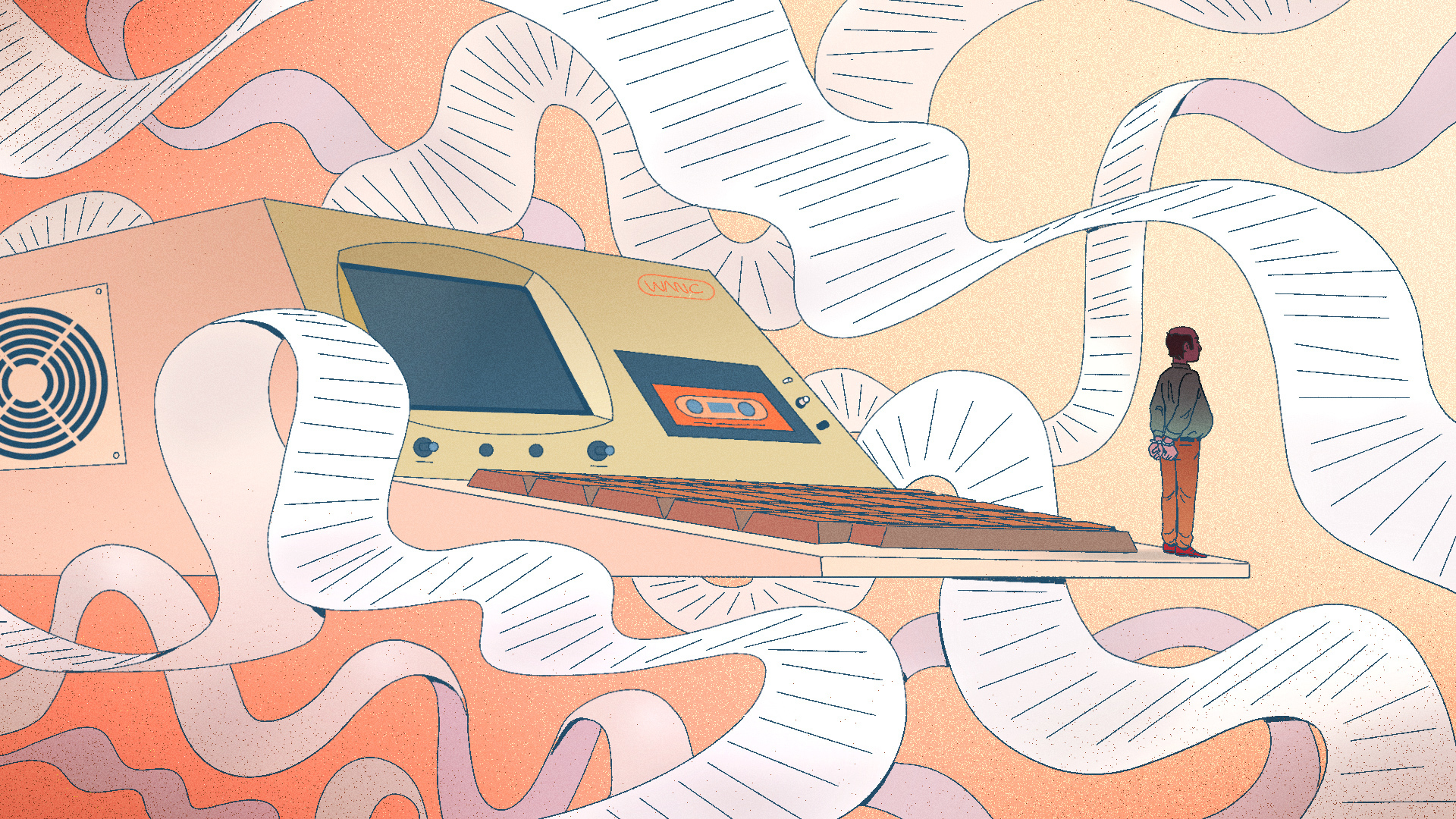 As the chief teller at the Park Avenue branch of the now-defunct Union Dime Savings Bank, Roswell Steffen embezzled over $1.5 million over a three-year period in the early 1970s — roughly the equivalent of $10 million in 2022. Bank employees dipping into the till is a crime as old as the industry itself, but what made Steffen’s story so novel and newsworthy was his reported use of computers to brazenly steal. It’s gone down in history as one of the first cybercrimes — if not the first.The maddeningly vague documentation of how exactly Steffen carried out his slow simmer heist is a product of its time: A still-nascent computer age where technical language was still up for debate amongst industry professionals, and the general public was only just beginning to grasp simplified examples of what computational power could achieve.

Crime at the dawn of the computer age

World War II had functioned as something of a global coming-out party for the computer, and over the ensuing decades the general collective understanding of their role in the world began to take form. By 1973, the former notions of frighteningly powerful and possibly evil Hal 9000-esque black boxes had mellowed into a disinterested acceptance of computers as something more like room-sized knowledge repositories, fed by inscrutable tapes and cards, and spewing out rolls of paper, always humming away in the backstage of civilization, affecting everyone, for better or worse, in ways far beyond their comprehension. With more pressing matters always at hand, an individual’s lack of understanding about the operational mechanics of a computer rarely justified further digging. So when the news said some bank employee was using these machines to steal money, the squishy and indistinct coverage of the bust painted a crude image of Steffen daisy-chaining together a series of debits from accounts he had access to. Using a computer to conceal his pilfering from both customers and management by “shuffling” the numbers around so everyone’s balance always appeared in order made sense to the layperson.images-1.fill_.size_519x750.v1667165864 As the first reported instance of a computerized heist, Steffen’s case made for a salacious news item then, and for quite a while after. But while digging into what on the surface appeared to be a forgotten bit of tech history, it became increasingly apparent to me that the full story of Steffen’s crime may have never actually been told. Though the Manhattan DA, national press, and his former employer may have painted him as an elite hacker when he was busted, Steffen appears to have been closer to a non-genius, non-hacker. A good fictional comparison might be a more mediocre Walter White, rather than the proto-Mr. Robot I originally conjured in my mind when I started my reporting. With Steffen and the vast majority of people directly connected to this case deceased or unhelpful (Living family members of the late Roswell Steffen, and, for that matter Rosnell Steffen, with publicly available phone numbers, were unreachable or unresponsive), the objective truth about what transpired may never come to light. But one thing is indisputable: The story of this middle-aged bank-employee-turned-reluctant-thief is just as tragic, captivating, and worthy of a revisit as that of the best prestige drama protagonists.

A master thief, or just a problem gambler?

See, Steffen didn’t just gamble for fun; he had a gambling problem, according to Goldstock. His daily vault thefts — upwards of $30,000 a day toward the end — were going directly toward racetrack and basketball game bets he hoped would mitigate the known-only-to-him debt he’d amassed at the bank. And so, Goldstock’s version of Roswell Steffen fell into the death spiral of so many gamblers before him. As the debt grew, he made higher-risk, higher-reward bets because he perceived those as his only chance at salvation.”He was just unlucky. There’s no other explanation,” Goldstock said, sympathizing. “You should lose about 5 percent. That’s the bookmaker’s edge. This guy lost 80 percent. We couldn’t figure out how this guy could be so bad at what he did.” As Goldstock remembers the details divulged to him post-bust, Steffen had apparently been a law-abiding citizen and model employee without any sort of gambling habit for the majority of his life. Then a chest X-ray revealed a worrisome dark spot in his lungs. Afraid to return to the doctor for another scan that might confirm the worst-case scenario, but with his mortality and family’s future financial security now firmly in the forefront of his mind, the chief teller who made only $11,000 a year, and recognized he wasn’t going to be promoted any higher at his job, set out to build a nest egg for his wife and two teenage girls. His initial supplementary income-earning effort was more wholesome: driving a cab at night. But as this was New York at the end of the ‘60s, he kept getting mugged. With little to show for all his second job’s work and the threat of metastasization looming, he shifted to a gambling strategy. Only when his own money was gone did he start to “borrow” from work, figuring he’d eventually pay it all back with no one the wiser. It makes complete sense that, according to Goldstock, Steffen seemed almost relieved once he was finally nabbed.Goldstock posits a possible cause for the discrepancy between his detailed and illuminating explanation of Steffen’s “utterly simplistic” process and the detail-sparse contemporary reporting hiding behind the assumed inscrutability of computers. The DA might have misunderstood Steffen’s explanation of “shuffling” the receipts of what was merely an electronic adding machine, believing it to be something much more complicated than it was. Again, that’s Goldstock’s secondhand account. But it fills in plenty of the gaps in what passes for history that are currently being patched over with ambiguity and sensationalism.

The evolution of a legendary crime

Reporting of Steffen’s crime evolved over time. Initially, the audacity of his means and the astronomical sum stolen was the focus¹. Then the focus shifted to the looming threat of more cybercriminals to follow². Within two weeks, bank officials were claiming he “never had direct access to the computer room and that the scheme was never caught by the bank’s computer system or… manual checks.” By December, the bank’s story had flipped back to his “unauthorized access” to a teller’s computer terminal. One reporter for a New Jersey paper³, seeming to recognize that there was a great deal of interest in Steffen, went around the 900 unit complex where the Steffen family rented an apartment for $250-a-month (about $1,670 today) hoping to get a scoop from a neighbor. Failing to pull at the thread exposed by Steffen’s humble abode and comments from other residents about the “ordinary” and “quiet” family that drove a car “neither flashy nor luxurious enough” to cause a neighbor to take notice, the reporter instead printed quotes from six people saying they knew nothing or did not want to be interviewed. And in 1975, when the full scope of the organized crime sting operation that busted a $200 million betting operation run by “key lieutenants of Anthony (Fat Tony) Solerno, gambling kingpin of Frank (Funzi) Tieri’s Mafia mob” was reported, Steffen’s mugshot was plastered right next to that of NY Giants’ Dr. Anthony Pisani, who’d also been caught up in the sting. These were people from entirely separate worlds.Roswell Steffen’s pioneering, high-tech crime, and its place in history are clearly worth greater scrutiny. What’s more, Steffen’s legend is jarringly disparate from the bleak and sympathetic tale that Goldstock tells today.This is a story rooted in dishonesty, filtered through a telephone game of what looks to have been ill-informed journalism, and historicization based on half-truths. The real story of Roswell Steffen is buried in a pile of 49-year-old discarded receipt paper, and needless to say we don’t have a prayer of accessing it anymore. But today, in an era defined by a blurring of the truth by electronic means, how fitting is it that what went down in history as the first cybercrime may have actually been an early example of that other 21st century plague: Big, fat, viral lies?¹Fort Worth Star-Telegram, Apr. 25, 1975. Page 5²Central New Jersey Home News, Mar. 23, 1973. Page 1³Chicago Tribune, Mar. 29, 1973. Page 50⁴Central New Jersey Home News, Mar. 23, 1973. Page 2