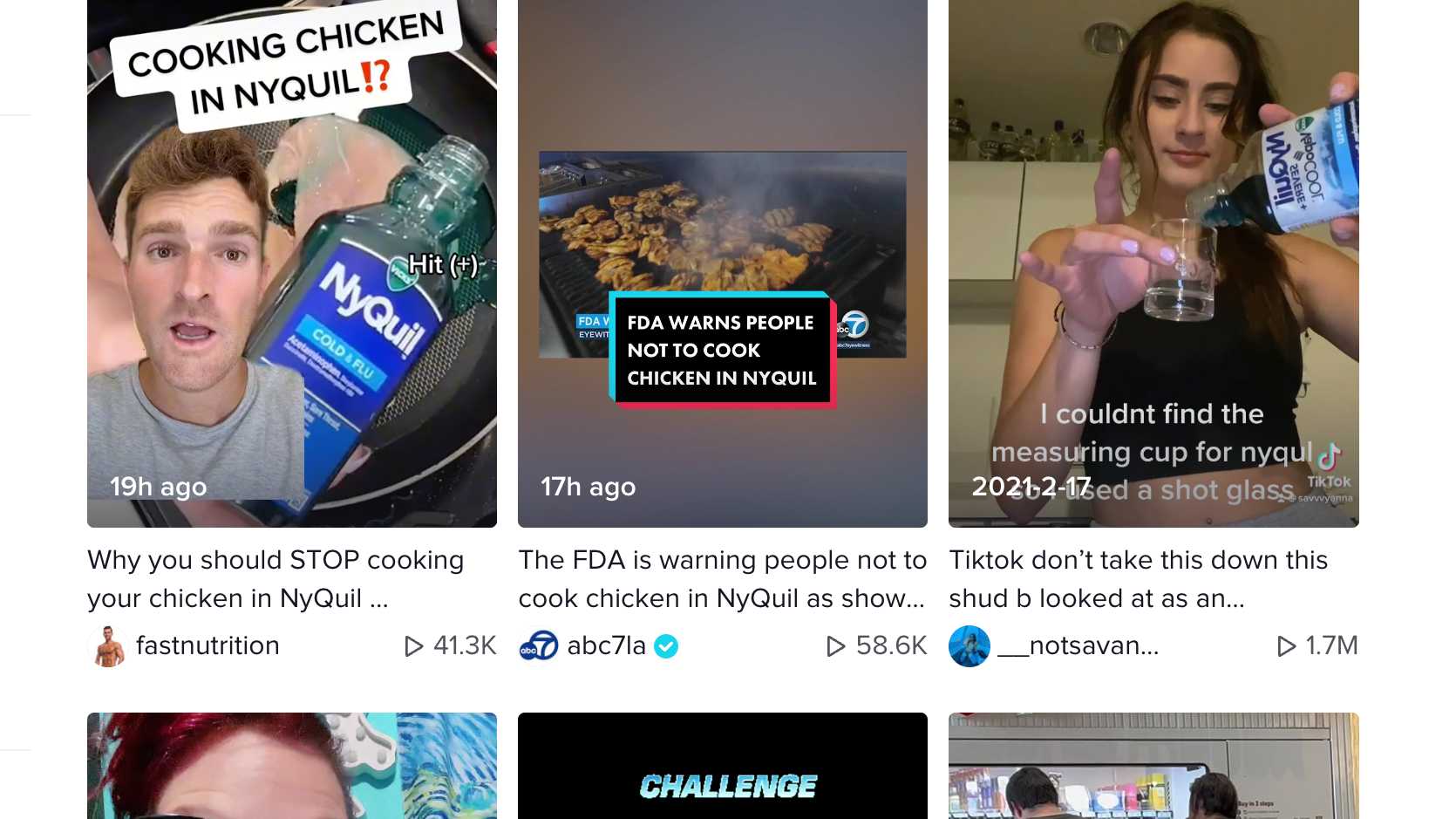 For the sake of humanity, let’s count our lucky stars: NyQuil chicken is not a real threat to public health. But this week, the FDA issued a warning about what the agency perceived as a TikTok challenge encouraging users to cook raw chicken in a pool of NyQuil, a sleep-inducing cold medicine. “Boiling a medication can make it much more concentrated and change its properties in other ways. Even if you don’t eat the chicken, inhaling the medication’s vapors while cooking could cause high levels of the drugs to enter your body,” the FDA wrote. “Put simply: Someone could take a dangerously high amount of the cough and cold medicine without even realizing it.” But if you search phrases like “sleepy chicken recipe” on TikTok, almost every video is a duet or a stitch-style expression of outrage. Users will share a clip of the same video of one person cooking chicken in NyQuil, then add a clip of themselves reacting to how absolutely absurd it is. This isn’t a TikTok challenge so much as a recycled, cursed meme that dates back to 4chan in 2017, and was almost definitely posted by a troll. Since then, the idea of “sleepy chicken” has periodically resurfaced on sites like YouTube, and even earlier this year, doctors warned teens against making their own NyQuil-infused meals. Now, such viral YouTube videos have been deleted, and if you try searching for certain terms related to NyQuil chicken, TikTok will redirect you to a resources page. But it’s too easy to get around these filters — just try searching NyQuil. Missing Attachment To be clear: cooking food in NyQuil is a very bad idea. But we don’t have any actual evidence to support that kids are doing this. This wouldn’t be the first time that a few gruesome TikToks have been blown out of proportion. Last fall, a “slap a teacher” trend appeared to go viral, which supposedly encouraged students to… slap their teachers. That sounds awful, but many were dubious of this trend actually existing. Months later, the Washington Post found that Facebook, with its increasing concerns about TikTok’s growing dominance, paid the Republican consulting firm Targeted Victory to discredit TikTok. As part of the initiative, Targeted Victory apparently made up the “slap a teacher” trend to sow anxiety around TikTok’s impact on teens. That doesn’t mean that TikTok trends — real or fake — don’t have consequences. One ten-year-old died while holding her breath for a “blackout challenge.” Social platforms should take precautions to nip harmful viral trends in the bud before they can spread too far, but this isn’t an issue endemic to TikTok. Rather, it’s a problem of media literacy. We are smart enough (I hope) to know that eating NyQuil chicken is a bad idea — and health warnings aside, it would probably taste horrible! But we also need to know how to tell whether or not widespread panic about a viral trend is actually legitimate. In practice, the FDA’s warning won’t stop people from eating NyQuil chicken. Instead, the government agency just transformed a fringe 4chan meme into a mainstream health concern. NyQuil chicken isn’t actually a TikTok trend by Amanda Silberling originally published on TechCrunch