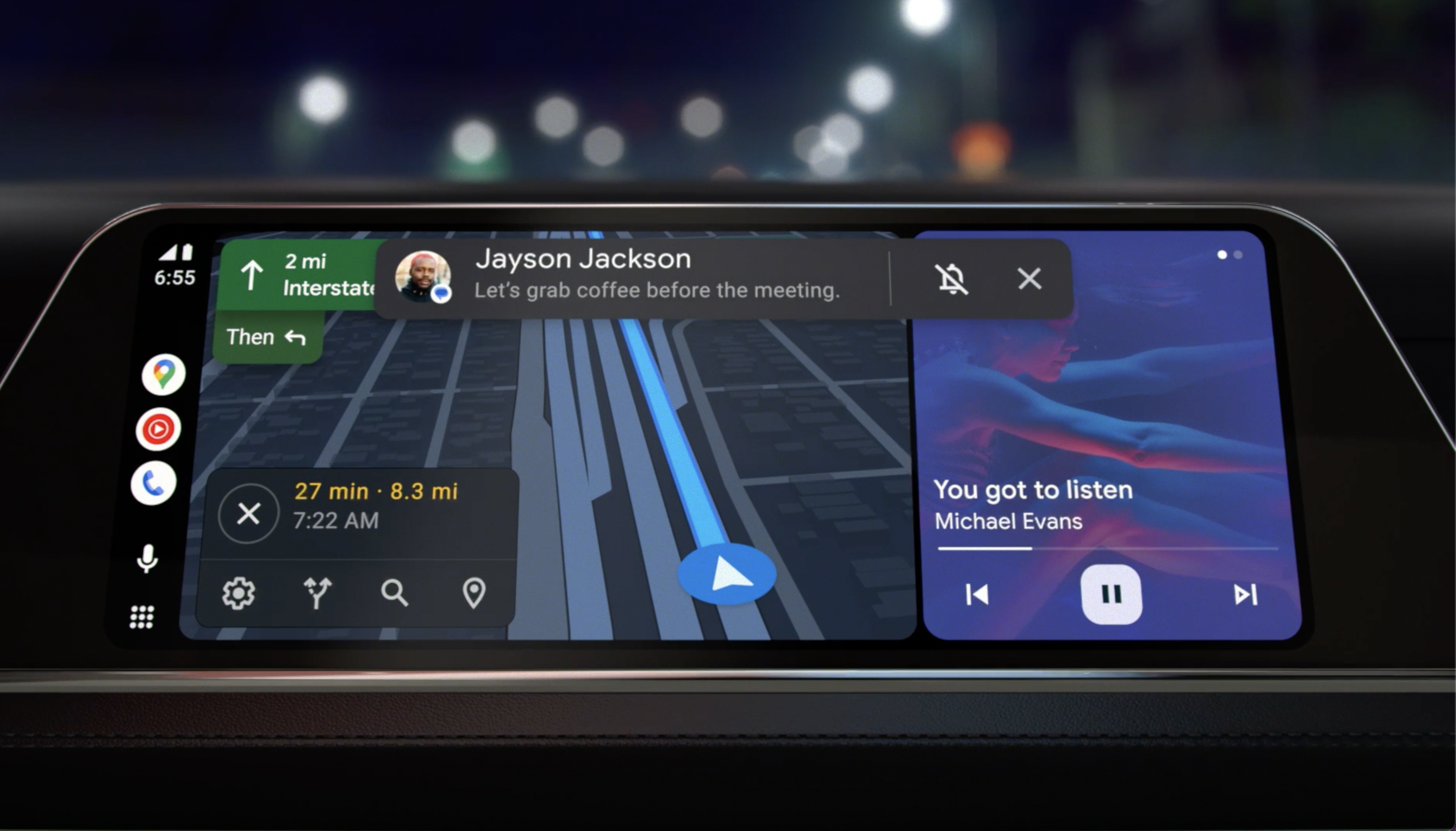 The new user experience design update, which was first previewed in May during Google’s I/O event, features a split screen layout that displays directions, music and texts — the essentials — at the same time. Now drivers won’t have to leave map view and navigate through menus and settings to quickly pause a song or see a message. Google said the split screen layout is compatible with all cars, so it can reconfigure itself based on whether the car’s screen is portrait, widescreen or any other size. The company didn’t respond to TechCrunch’s question on whether the new Android Auto features would roll out via over-the-air software updates to all Android-enabled vehicles today. At CES on Thursday, Google provided further details of how the display will look to drivers. Maps is now positioned on the screen closer to the driver’s seat, and there’s a “quick launcher” that lets drivers quickly access recently-used apps. The new media card includes Material You, Google’s new unified design language, to feature a driver’s favorite album art. Android Auto is also getting a Google Assistant update, which will now provide smart suggestions including missed call reminders, quick arrival time sharing and instant access to media. Google is introducing a progress bar for music or podcasts so drivers can skip ahead in a song or episode (yay for skipping ads!), which the company says was one of its most requested features. There will also be on-screen shortcuts for replying to messages and calling favorite contacts, and the newest Pixel and Samsung phones will be able to make calls using WhatsApp with Android Auto soon. In addition to user design and experience updates, Google is also making it easier to share digital car key access. Currently, users can share digital keys across Pixel and iPhones, but soon that will expand to Samsung phones and Xiaomi users. This is already supported on BMW vehicles, but the digital car key will expand to more brands in the future, says Google.

Updates for cars with Google built in

Honda, Chevrolet, Polestar, Volvo and a number of other OEMs have Google built into their cars, which means Google Assistant, Google Maps and more apps from Google Play can be found directly on the car screen without relying on a phone. At CES, Google hinted that other car brands like Ford and Lincoln will also be built with Google later in 2023, and shared a number of updates to this integrated service, including: Select Renault vehicles will now have the Waze app available Automakers using Google Automotive Services will now have Google’s new HD map, starting with the Volvo EX90 and the Polestar 3. The HD map features precise road details like lane markers, signs and road barriers to better help with advanced driver assistance technologies that promise hands-free driving on certain roads. YouTube will be available to watch on car screen while the driver is stationary. This is in addition to Tubi and MGM+ that are already available on Google Play. Google said it would be bringing this feature to Volvo cars at CES last year.