Micromobility in limbo: Takeaways from Paris and LA 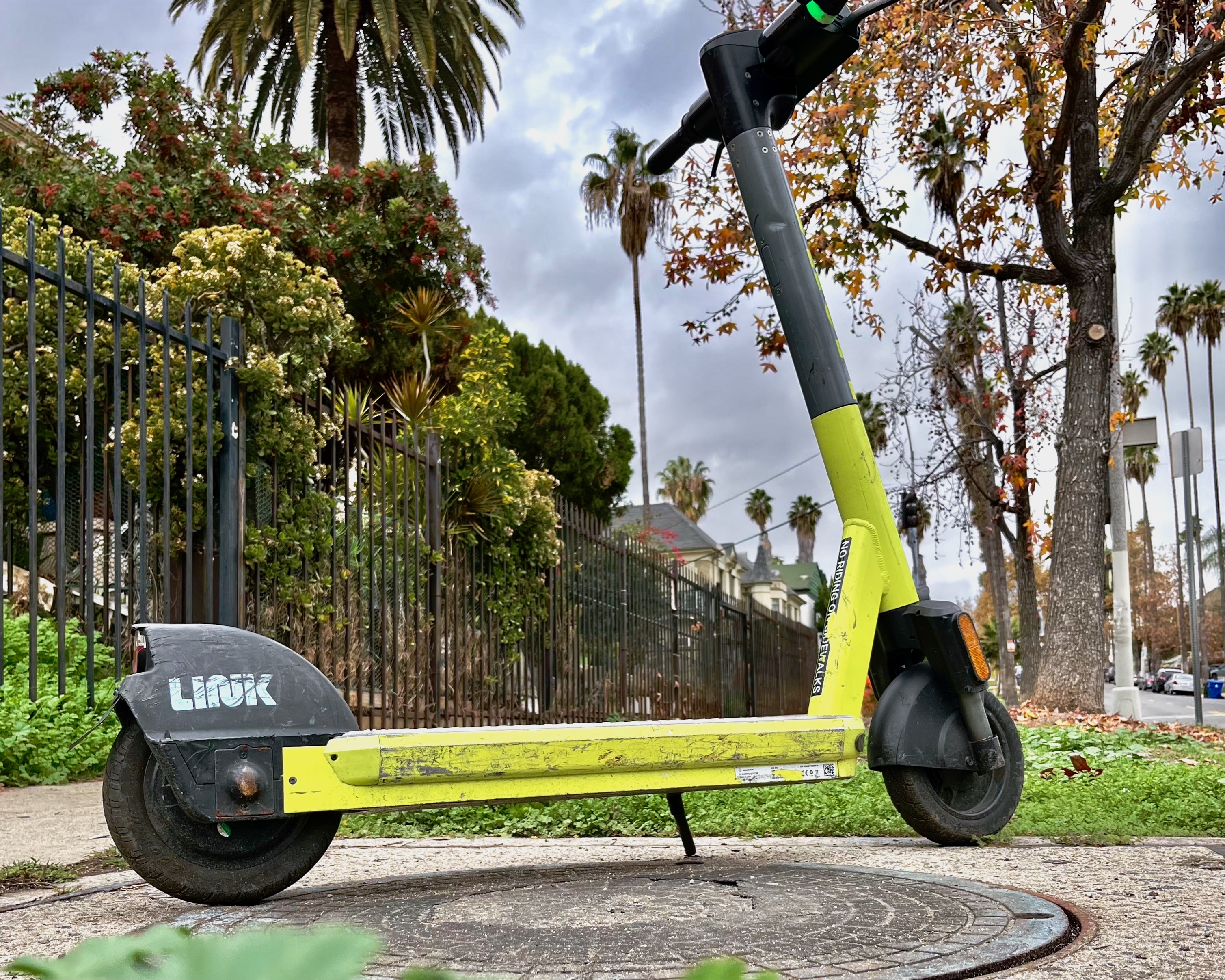 In cities like Paris, most people aren’t replacing car trips with shared e-scooter jaunts in a meaningful way; the cost of riding scooters makes them an expensive option for last-mile transit connections and equitable access; and the public disclosures of Bird and Helbiz have shown us that achieving profitability is incredibly difficult. Plus, cities that allowed shared e-scooter companies in their midsts are increasingly making it difficult for scooter companies to operate sustainably. For the sake of traffic flow and carbon emissions, there need to be alternatives to cars. Are shared e-scooters the answer to that, or are they just another shitty option? What have we gained by introducing shared micromobility to cities? We decided to take a look at two cities that were at the forefront of the e-scooter revolution – Los Angeles and Paris. The former has garnered a reputation of being a bit of a free-for-all, with a laissez-faire capitalist regulatory approach that allows multiple operators to compete for rides and space. The latter has some of the strictest regulations in the game, including limited operator permits, and in fact is still considering banning shared e-scooters entirely. “From a societal perspective, I’d be more concerned about e-scooters leaving Los Angeles than Paris,” David Zipper, a visiting fellow at the Harvard Kennedy School’s Taubman Center for State and Local Government, told TechCrunch. “Paris is so dense and has a great metro. It’s possible scooters there are replacing forms of transportation that are even greener. LA is different. It’s so car dominated and hungry for alternatives to the automobile.” Despite that apparent hunger, two scooter operators – Lyft and Spin – recently exited the Los Angeles area, blaming a lack of favorable regulations and too much competition, which apparently made it difficult to turn a profit. In total, there are still six operators in LA – Bird, Lime, Veo, Superpedestrian, Wheels (now owned by Helbiz), and Tuk Tuk, a new entrant. The fact that both cities – one sprawling, the other dense; one under-regulated (so say the shared scooter companies) with several operators, the other highly regulated with fewer operators – still haven’t quite got it right with e-scooters raises a key question. What type of market, if any, is the right one?

Paris: To ban or not to ban?

GettyImages-1214194806-1 If ever there were a city where you’d think shared e-scooters would thrive, it’s Paris. The city is one of the most densely populated in Europe. Most households don’t own a car, and if they do, they use them rarely. And Paris is led by Mayor Anne Hidalgo, an advocate for the reclamation of public space from roads and vehicles for a more liveable, “15-minute city.” In her time in office, Hidalgo has removed parking spots, turned streets into walkable areas and opened new bike lanes. And yet, Paris is in the midst of potentially banning its 15,000 shared e-scooters as politicians from several parties call on Hidalgo not to renew the contracts of Lime, Dott and Tier when they expire in February 2023. She is expected to make her decision any day now, and indeed there are some rumors floating around that she already has. Paris has been an important market for the e-scooter industry at large, but the city has chafed against the vehicles, citing safety incidents, some of which were fatal. Over the years, Paris has responded to safety issues with increasingly strict regulations. Last summer, following the death of someone who was hit by two women riding a scooter near the Seine, Paris implemented “slow zones” for scooters. A year later, the whole city turned into a slow zone, with shared e-scooter speeds capped at just over 6 miles per hour. Despite these harsh regulations, the city is still on the verge of saying goodbye to shared scooters forever. Shocked. Appalled. Frustrated. These are the feelings I had upon first hearing the news of the potential ban. So what if there are accidents? Car accidents happen all the time! Boohoo to your complaints about scooters on sidewalks! Build better bike lanes, then! But looking at the scattered statistics of how scooters are used in Paris, it’s possible that scooters aren’t providing the value that cities need – namely, limiting car usage. Lime told TechCrunch that 90% of its fleet in Paris is used everyday, and a scooter trip starts every four seconds in the city. In 2021, over 1.2 million scooter riders, 85% of whom were Parisian residents, took a total of 10 million rides across all three operators. Lime estimated that could have replaced 1.6 million car trips. Could have, but did they? One study from 2021 found that e-scooter users in Paris are mainly men aged 18 to 29, have a high educational level, and usually jump on a scooter for travel time savings. Most riders (72%) in the study said they shifted from walking and public transportation, not cars. Another survey of French scooter riders found that shared scooters were “more likely to replace walking trips than other modes of transport.” These results aren’t limited to Paris. A survey among customers who were registered with five different shared e-scooter apps in Norway in the fall of 2021 found that in all circumstances except for night rides, e-scooters most often replace walking. E-scooters do replace cars with longer e-scooter trips if the user is male, if the e-scooter is privately owned, and to destinations poorly served by public transport, the study showed. What is getting in the way of the ultimate goal – to shift travelers away from cars? Perhaps most people, in Paris at least, wouldn’t use a car anyway because the city is walkable and public transportation is sufficient. Or, maybe would-be car drivers and taxi riders just need more time to get used to the concept of scooter riding as a way of life. Or, maybe scooters just aren’t reliable as forms of transport for longer journeys. Fluctuo, an aggregator of shared mobility data, found the average scooter trip length in Paris was 2.67 kilometers in July 2022 and 2.53 kilometers in November. A long enough journey that you might prefer not to walk it, but too short to drive it in a place like Paris. Whether scooters are getting people out of cars or not, they’re certainly popular in Paris. A September Ipsos poll commissioned by Lime, Dott and Tier (and therefore taken with a grain of salt) found that most Parisians agree e-scooters are part of the daily mobility of the city and are consistent with City Hall’s broader transport policy. Most of the respondents (68%) said they are satisfied with the number of self-service scooters on the streets of Paris, while a quarter indicated they would actually like to see more. And in response to the potential ban, a recent petition launched by a Paris resident has garnered more than 19,000 signatures in opposition. Hannah Landau, Lime’s communications manager for France and southern Europe, told TechCrunch a ban would make Paris a global outlier. “No major city in the world that introduced a shared e-scooter service has permanently banned them,” she said. “In fact, the major global trend today is cities renewing their programs – such as London – or even expanding them with more vehicles or larger service areas (NYC, Chicago, Washington D.C., Rome, Madrid, Lyon).” Lime, Dott and Tier have put forward a variety of measures to Paris’ city hall, which they say will address safety concerns and ensure a renewal of scooter licenses next year. Among the proposals are a joint campaign to raise awareness about traffic laws; a fine system that uses cameras on public roads; expanding use of scooter ADAS to prevent sidewalk riding; and equipping scooters with registration plates. Among major cities, Paris may be unique in weighing a blanket ban, but other locales have recently shown an appetite for limiting scooters, including Stockholm, Tenerife, Spain, Boston College and Fordham University. – Rebecca Bellan

los-angeles-scooter-app-1 Let’s add a couple more wheels back into this discussion. Yes, I’m about to get personal about the automobile. Buckle up! Automakers rewired American cities over the last century, and if you ask me, we’re all suffering for it – especially Angelenos. Gas-powered cars, SUVs and trucks infamously clog LA’s arteries. They muck up the air, driving climate change and health issues alike. Plus, a driver in an SUV once hit me while I was standing on the sidewalk, innocently looking for a nearby ramen joint. See, I told you it was personal! All this is to say that, as an occasional driver and grudge-bearing pedestrian (the kind who bellows, “I’m walkin’ here!” in a vaguely New York accent), my heart aches when I see micromobility operators bail on cities, as Spin, Bolt and Lyft have in LA. This isn’t because I ride scooters regularly, and it’s not because scooters are now scarce (a block from my apartment in central LA, I can find several Limes and Links on sidewalks and in the crooks of curbs). I simply want to see cars reined in, to rebalance the city around public transit, walking, biking and even scooting — whatever it takes to free up streets and reduce fumes. But what future do scooters and the like have here, given the recent exits, and Bird’s financial struggles to boot? That depends on who you ask. At least one operator — Lime — says things have never been better in Tinseltown. A spokesperson recently told us that Los Angeles is Lime’s biggest American market today. While acknowledging LA’s shortcomings for scooters, including its sprawling geography, the spokesperson likened 2022 to a “wow moment” that showed how “micromobility is here to stay.” Lime credited its local staff, work with city officials and investments in hardware for the apparently strong year, but the company did not respond when TechCrunch asked if its LA operations are currently profitable. Lime is privately held, so we don’t get as much insight into it as we do Lyft and Bird. Lime’s experience in LA may be an outlier. Both Spin and Lyft told TechCrunch that they needed to strike new, longer-term deals with municipalities here in order to return. “In a nutshell: The challenge with LA is that it is an open vendor market with no vehicle cap,” Spin’s chief executive Philip Reinckens said in an email to TechCrunch. “This had led to an imbalance of vehicle supply to rider demand as operators over-saturate the market.” “A long-term arrangement for limited operators would be a necessary condition to consider re-entry,” Reinckens added. Santa Monica, a coastal city in LA county, already seems to be on board with this approach. Next year, Santa Monica says it plans to limit the number of permitted scooter operators from four to just one to two. Zooming out: Greater LA area has a mixed reputation among cyclists, but officials have shown some willingness to accommodate things other than cars lately. There are a few interesting public initiatives underway, including recently announced efforts to promote cycling in South LA, North Hollywood and San Pedro. It’s no revolution, but it could make the city a bit safer for all lightweight modes of transportation, including e-scooters. Taken together, LA’s scooter free-for-all seems destined for consolidation, leaving fewer operators with a whole lot of ground to cover. But shared e-scooters on the whole also don’t seem to be at any risk of getting the boot from the City of Autos, much unlike Paris. – Harri Weber Micromobility in limbo: Takeaways from Paris and LA by Rebecca Bellan originally published on TechCrunch