Meet Fizz, the social app downloaded by ‘95% of Stanford undergrads’ 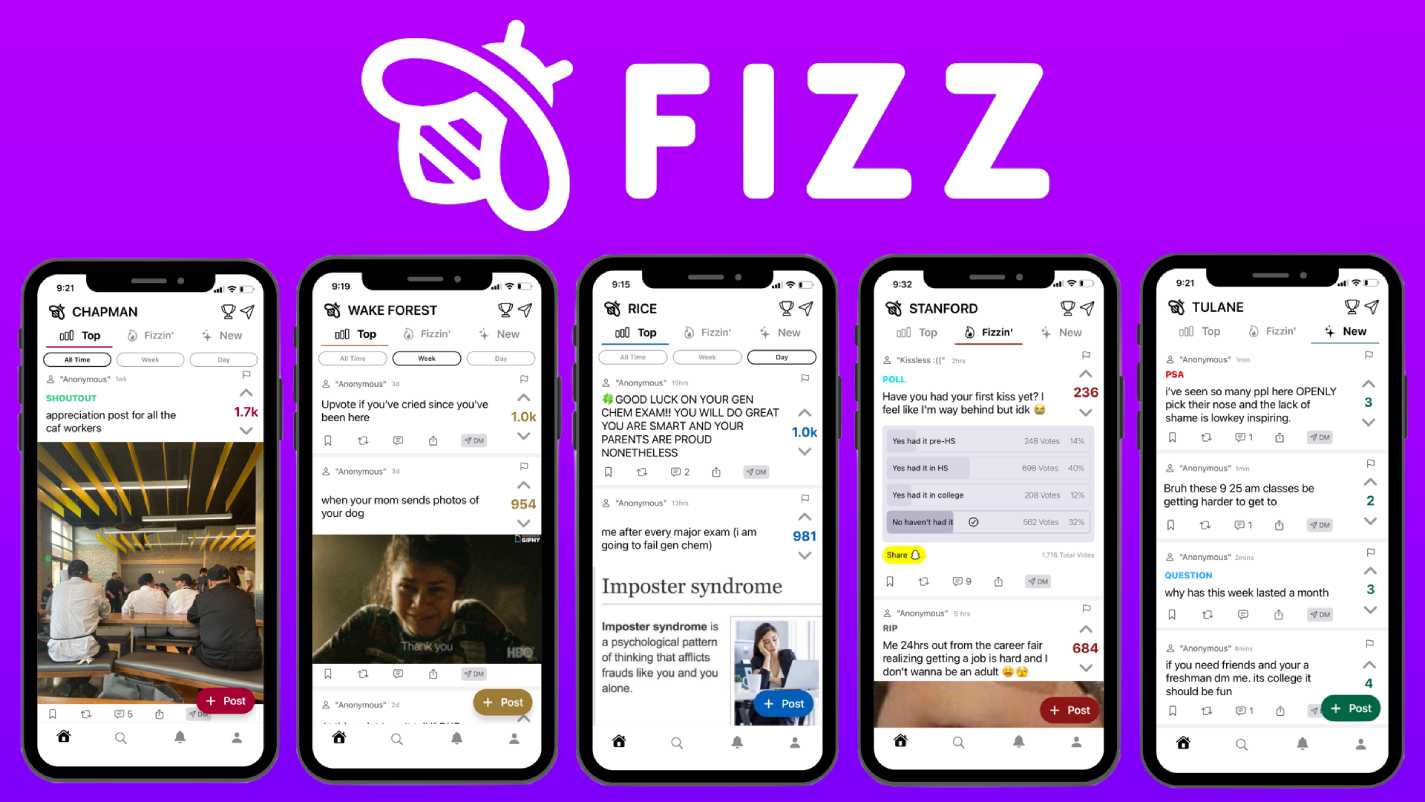 “She walks in at 2:30 with just a big, beaming smile. There’s no apology or anything like that,” Mathur told TechCrunch. “She says, ‘Papa, I met the next Mark Zuckerberg!’” The founder of ten startups and a longtime investor, Mathur isn’t naive. It’s a big declaration to call a twenty-year-old at a Sigma Nu party the next big social media founder (and nowadays, the Zuck comparison may not be the most flattering). But by the end of the weekend, Mathur was all in. He invested $750,000 into Fizz, co-founded by Stanford dropouts Teddy Solomon and Ashton Cofer, and then joined the company as CEO. About a year later, Fizz just closed a $4.5 million seed round, which Mathur led himself. Now, the anonymous, college-only, Reddit-like social app has spread beyond Stanford to campuses like Rice, Elon, Dartmouth, Wake Forest, Chapman and Tulane, with plans to expand to over 1,000 campuses by the end of next year.

An app to mitigate isolation on college campuses

Who is this so-called, “next Mark Zuckerberg” anyway, and how did he convince a sixty-something-year-old Silicon Valley veteran to helm his nascent social media platform? Solomon, a former economics major, starts the Fizz origin story by declaring he was part of Stanford’s “COVID class.” He matriculated in fall 2020, possibly the worst time for eager teenagers to begin their next adventure. As expected, it was difficult to make friends or feel like part of a community when the pandemic made it unsafe to live and socialize on campus. “We essentially got to Stanford and felt extremely disconnected from Stanford,” Solomon told TechCrunch. “There’s so much social anxiety. We got put into a GroupMe with 1,200 students, where four people talked probably, and we were like, this doesn’t work.” So, he set out to build an app by college students, for college students, seeking to help his fellow classmates feel less lonely and form meaningful connections on campus. Fizz is only available to college students, and users can only access the Fizz community for their own college (Fizz showed me a demo of the app, but I wasn’t allowed to make my own account to test it, since I’m not a student). On the app, students can publish anonymous text posts, polls and photos, which classmates can upvote or downvote. Users can DM each other, choosing to reveal their identity if they so desire. At first glance, Fizz appears like a less heinous YikYak, but Mathur and Solomon say Fizz is different because students can only register if they have a valid .edu address for their school. Missing Attachment “The biggest differentiating factor is the way that we do moderation,” Solomon told TechCrunch. Fizz hires about fifteen moderators per school who can supplement standard AI-based content screening. The moderators are paid, but Solomon declined to share how much they make. “Posts are removed within less than a minute on average, across all of our communities. We’re able to mute banned users, and if you’re banned from the community, you’re not coming back in, because you don’t have another school email address that you can put in.” Solomon thinks that peer moderation is key, since only students familiar with campus culture can parse the nature of hyper local posts. “If somebody were to post ‘Arrillaga sucks’ on the app, a centralized moderation team overseas would say, ‘Arrillaga? They’re bullying Arrillaga. We need to take this post down,’” Solomon explained. “But Stanford students would say, ‘That’s the name of the dining hall, they’re talking about food in the dining hall.’” The founder also said that 95% of Stanford’s approximately 7,600 undergrads have downloaded the app; at Rice, that figure is 70%. Some of this adoption might be a bit inflated. Fizz promotes the app on campus to students by offering a free donut in exchange for downloads, a tactic that’s pretty common for startups targeting college students. But according to Solomon, Fizz has kept a solid footing on campuses regardless. “On any given campus, we’re going to have 50 to 60 percent of our users getting onto the platform every single day,” Solomon told TechCrunch. Missing Attachment With its own CEO leading the seed round, Fizz raised $4.5 million to expand to more campuses around the country. By the end of the 2023 academic year, Fizz hopes to be on over a thousand U.S. campuses. But growth at that fast a rate needs to be handled delicately, or else Fizz could turn into a cesspool faster than you can say YikYak. Other investors in Fizz include Lightspeed, Octane and other angels. Mathur himself has exited six startups, including the e-commerce company Junglee, which he sold to Amazon in 1998. Mathur has also sold consumer-facing startups to companies like Dropbox and OpenTable.

Fizz, or fizzle out?

Fizz is not the first app to capitalize on students’ desire for a more authentic social media experience. Jamie Lee dropped out of Columbia to build Flox, a social app that helps friend groups connect. Another Stanford student, Liam McGregor, just raised a $5 million seed for Marriage Pact, an intense dating app with no swiping that’s intended to forge deep connections based on in-depth questionnaires. Fizz has also taken hold at the same time that BeReal is becoming increasingly popular among Gen Z users. Like Fizz, BeReal seeks to create a more authentic alternative to apps like Instagram. BeReal and Fizz both leverage a college ambassador program to jumpstart adoption among their target audiences. It’s still up in the air whether BeReal is all hype or a true hit — the app needs to prove it can maintain its popularity and start making money — and Fizz will face the same challenges. Though Fizz isn’t currently monetizing, Solomon and Mathur say that they’ve thought about creating a marketplace for students to buy and sell things, like textbooks or bicycles. Fizz currently has 22 full-time employees, who operate out of a house in Palo Alto near Stanford’s campus. “Instagram is basically just a curated highlight reel,” said Solomon. “We wanted to create something where people can actually communicate with one another.” Meet Fizz, the social app downloaded by ‘95% of Stanford undergrads’ by Amanda Silberling originally published on TechCrunch