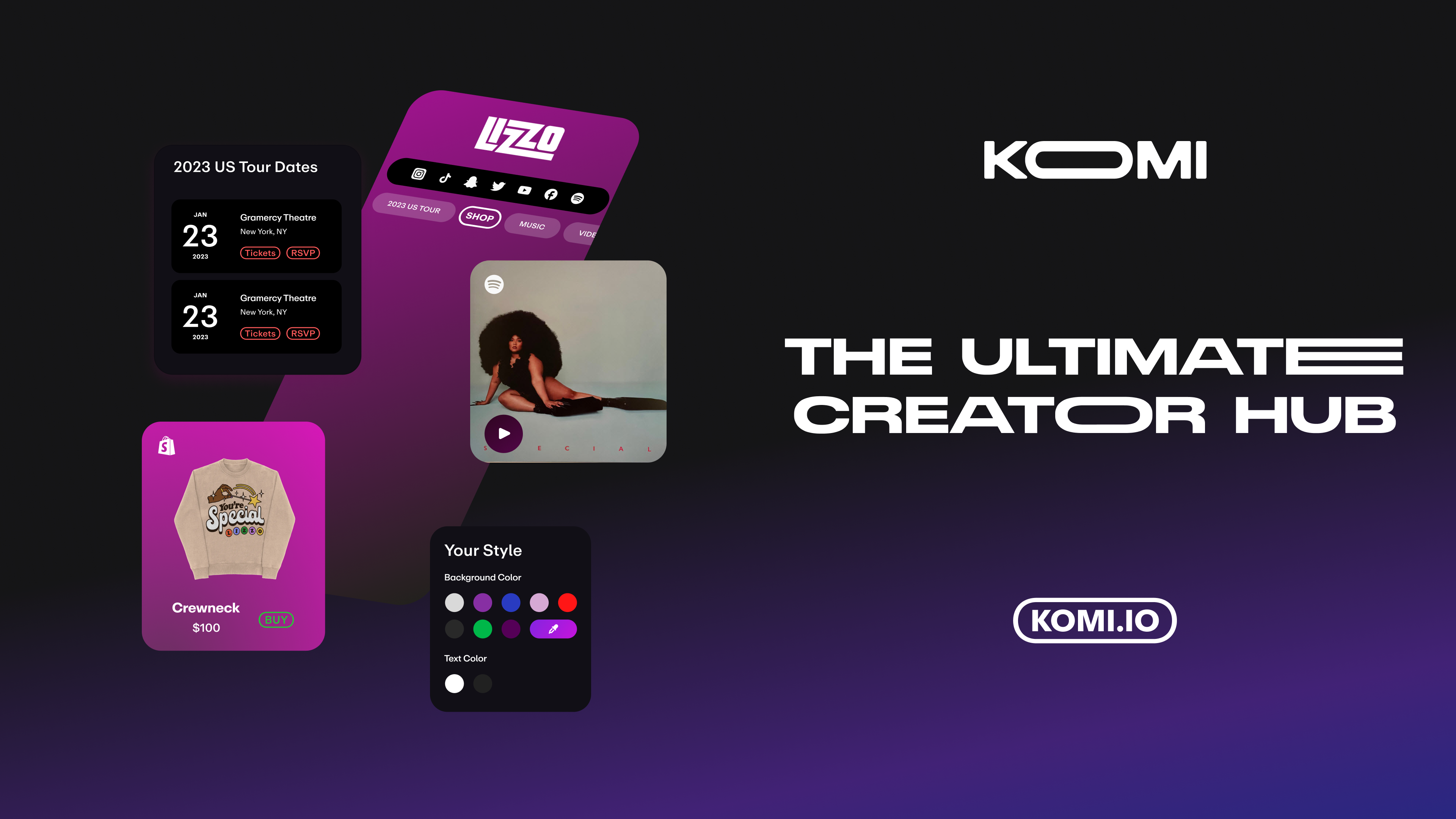 Launched in October 2021, Komi is designed to provide content creators, musicians, athletes, celebrities and other creative talent and personalities alike to have a central hub or “home on the internet” where they can customize a landing page that promotes their latest podcast episode, YouTube video, music album, merch drops, tour dates, meet-and-greet opportunities, social media accounts and so on. “Komi was built to empower creators. Millions of individuals across the world generate revenue from their online profiles, but many lack the digital toolset they need. Komi is working closely with the world’s top creators and their teams to build the ‘all-in-one’ product suite needed to build a deeper, direct and more rewarding relationship with their audience,” said Lewis Crosbie, co-founder and CEO of Komi, in a statement. The startup has also partnered with major platforms such as TikTok, Instagram, Twitter, Pinterest, Snapchat, Spotify, Apple Music, YouTube, SoundCloud, Twitch and Shopify, allowing users to integrate all their content and products. In addition, Komi includes backend tools that allow users to gather data, such as total views, earnings, clicks, and average clickthrough rate (CTR). Komi is currently invite-only yet has plans to open to the public in early 2023. The platform is subscription-based and costs $10 per month. For comparison, website builders Wix and Squarespace charge as low as $16 per month. Missing Attachment While the London-based startup declined to share its total user base, Komi told TechCrunch it expects further global growth in the coming months. Fans engaging with Komi pages has grown 40% month-over-month since launch and user engagement has more than doubled over the same period, the company added. Crosbie told TechCrunch that both larger and smaller influencers are encouraged to use Komi. “The whole idea [of Komi] is that you can be a smaller-time influencer, like my friend Conrad. He can do this himself– he doesn’t need a music label or manager to do this. [Komi] is self-serve,” Crosbie said. (For context, Conrad is a lesser-known British singer with 1.07K subscribers on YouTube, nearly 8K followers on Instagram and over 100,000 listeners on Spotify.) And unlike Wix and Squarespace, which are targeted towards businesses, Komi is purpose-built for creators, so it’s more straightforward to use, Crosbie claims. “Squarespace or Wix provide templates for companies, and creators often get treated like [small and medium-sized businesses], but they’re not. They’re more like consumers. So it needs to be as easy as it would be for you and I,” he added. As the creator economy grows, with approximately over 300 million creators globally, Komi’s landing page tool could potentially help many, regardless of skill set, from managers with high-profile clients to one-man-band creators. Music labels Red Light Music Management and Get Engaged Media also participated in the round, as well as noteworthy angel investors like World Cup winner and soccer player Mario Gotze, former Victoria Secret Angel and model Taylor Hill, Ben Lovett from Mumford & Sons and Sven Ahrens, Director, Global Growth at Spotify. The funding will help Komi improve its platform and eventually roll out more fan engagement and monetization tools, the company told TechCrunch, but declined to provide specific details. Komi, a landing page tool for content creators, raises $5M seed round by Lauren Forristal originally published on TechCrunch