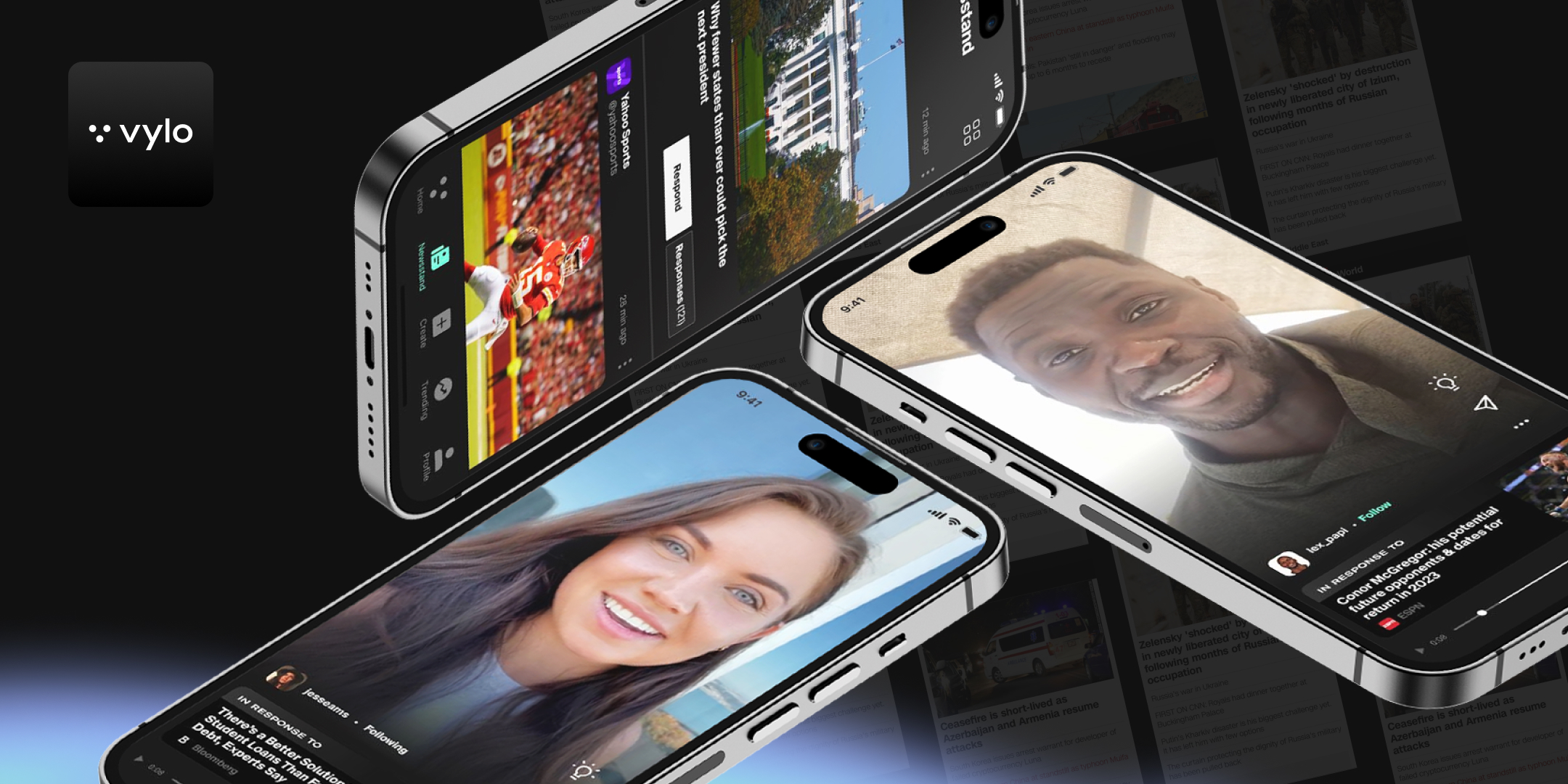 My first reaction to the idea was: why does one need to share news comments via video clips? Can’t it just happen in the text-based comment section of The New York Times or other news websites? Tyler Reynolds, founder and CEO of Vylo, believes the future of news lies in videos. “We’re looking forward to building the kingdom of news and discourse and what news platforms will look like very shortly in the future,” he said in an interview with TechCrunch. Developed by a team in the U.S., the Netherlands and Ukraine, Vylo combines news aggregation and video-driven social media. Its home tab features a stream of news compiled from major publications and curated by an in-house team. Under each story is an option to add one’s video response. For those who don’t feel comfortable showing faces, audio is an option, too. Missing Attachment A big VC name is vouching for Vylo. Kleiner Perkins Fairchild Fund IV led the startup’s $2 million pre-seed round that has recently closed. Other investors from the round included Brian Cornell, CEO of Target; Ryan Howard, a 3x Major League Baseball All-Star; Curt Shi from Welinder Shi Capital; 8808 Ventures, the venture firm of Ripple CEO Brad Garlinghouse; among other angel investors. One of the appeals of video-based news discussion is that it adds a human touch, Reynolds argued. “You and I and eight other friends go out to lunch and we’re talking about everything from COVID to Joe Biden to travel to whatever because we’re each other’s trusted sources. There’re these moments that we have all the time… We could recreate those moments with a tech platform.” User-generated video commentary is nothing new, but Reynolds thinks the barrier of entry is too high on existing channels like YouTube, where users need to first eloquently and succinctly sum up the news. With Vylo, on the other hand, creators can simply give their two-minute take on a news piece item that already exists on the app, an aspect that the founder believes lowers the bar for news commentary. In effect, Vylo is visualizing the response section on traditional news sites and democratizing video commentary. The “social” aspect of Vylo is the “Trending” tab that displays popular video and audio comments, which are ranked by their “insightfulness”, similar to how readers upvote comments on traditional news websites. For a more personalized news digest, users can create their own “Newsstand” by following various outlets and topics. Comments are vetted by the third-party content moderation provider Hive before going live.

Break from the past

Twitter has long been the world’s digital public square, but as Elon Musk turns the social media giant upside down, upset users are leaving in droves. Nonetheless, Vylo doesn’t plan to be a Twitter alternative like Mastodon. “It’s like a bunch of dogs chasing tails,” said Reynolds. “Everyone’s focused on the here and now. But our tech and tech platforms will evolve. We have no interest to be a Twitter competitor. We are looking much further into what’s the future of these things. “One important note is the factor of people showing their faces and showing their voices. That’s something that we really aren’t afraid to be rolling out now because it’s going to be a mainstay very soon,” he added. “I think the future of news is decentralized,” suggested Shi from Welinder Shi Capital, pointing to the participatory nature of Vylo. “The young generation doesn’t really get their news from news sites anymore. They are on Twitter and Instagram, but these platforms aren’t primarily for news, so there is a gap to be filled.” Vylo launched its public beta version a few weeks ago and has drawn over 500 users. Monetization is not something on its imminent agenda, but when the time comes, the startup is weighing a few options, including an ad-free user subscription, a revenue-sharing model with content creators, and helping paywalled publications drive subscriptions from which it can take a cut. Kleiner Perkins-backed Vylo thinks the future of news is video commentary by Rita Liao originally published on TechCrunch