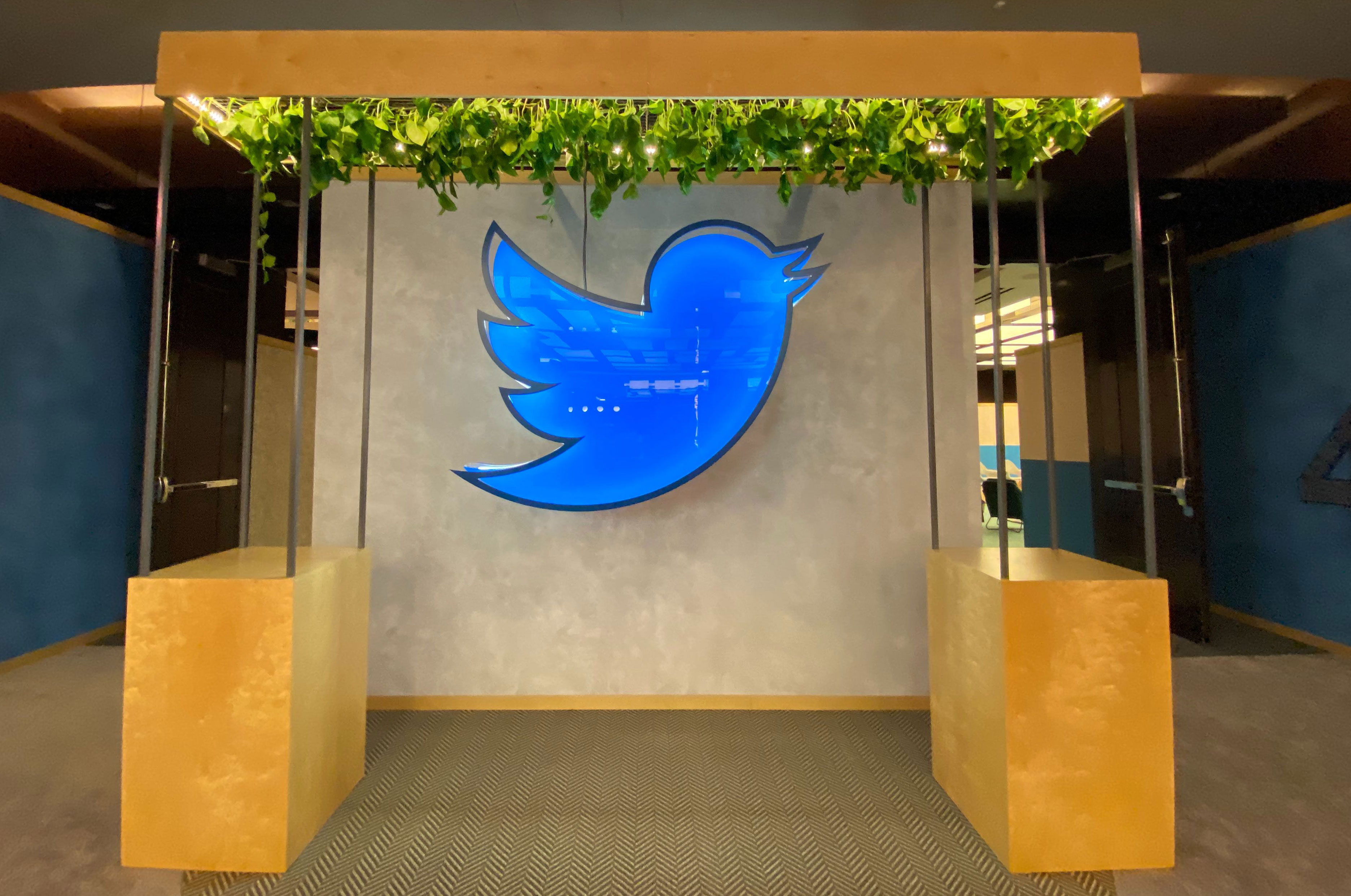 This auction isn’t just some rogue Herman Miller chairs (though of course, you can bid on those too). There is some truly bizarre Twitter memorabilia up for grabs, and — not to make the second football metaphor in two paragraphs — watching the bids update in real time on these strange items is kind of like my own personal Super Bowl (unless if the Eagles make a run for it, in which case, the actual Super Bowl will be my Super Bowl). If you one day hope to open a museum about the history of Silicon Valley, you might wanna check out this auction (and reevaluate your life goals, maybe). And if you don’t have thousands of dollars to spare for a giant planter in the shape of an @ sign, well, you should probably check it out anyway because it’s funny and we need to get our laughs in when we can in this cruel world! There are 631 items up for auction, and you have about one day left get your bids in. Go forth and conquer. Or watch along in awe and horror.

Missing Attachment When I started working on this article, the bird was going for $350. Now, it’s up to $2300 and I won’t be surprised if the next minimum bid is $5000 by the time I hit post. No, this is not an inditement of my productivity. I’m a professional! People are just bidding really, really fast for this. Weirdness: 7/10. I love a good neon sign, but it’s really not that weird that this thing exists. If you run a company and rent office space for said company, there’s an 80% chance you have a neon sign of your company logo. Don’t fact check that statistic. How many blue checks is this worth?: This thing is racking up bids quick. I’m going to estimate that it sells for 1,125 blue checks (or, $9000). Do I actually want to own this?: This thing is kooky and fun, but who actually wants this in their home? Then again, I am biased as someone who lives in a small apartment, considering that the people bidding on this probably own multiple properties and have plenty of room to hang up their novelty Twitter bird in a spare room where they can regale their fellow rich friends with tales of how they outbid their arch nemesis for this prized avian artwork.

Missing Attachment When you work under a guy who has condemned COVID-related lockdowns and has used his massive platform to bully Dr. Anthony Fauci, why wear a mask? Sure, this is a basic precaution that you can take while working in an office to prevent the spread of a dangerous virus. But Elon Musk might think you’re a loser if you care about the safety of other human beings, so tread carefully. Weirdness: 4/10. Let’s give Twitter the benefit of the doubt and say they’re selling these masks because they just have so many already that will keep their employees protected for the foreseeable future. In that case, this is actually a really great deal! It’s only $60 right now! Go get those masks! How many blue checks is this worth?: According to a quick Amazon search, you can buy a 40-pack of KN95 masks for about $30. In this auction lot, Twitter is selling 48 cases, which appear to contain 40 masks each. Based on my very serious Amazon analysis, one KN95 mask costs approximately 75 cents. This lot contains 1920 masks. So, if this sells at market rate, this should cost $1440, or 180 blue checks. Do I actually want to own this?: Hell yeah! I could use a box or two for myself, and then I would offer them up to some underfunded community organizations that might benefit from these free masks. Yeah, I know, this is a TechCrunch article, not my Miss America speech, but this shit is valuable! And it’s just sitting at Twitter, going to waste!

Missing Attachment I’ve heard through the grapevine that in the pre-Musk days of Twitter, the food was pretty good. If you’re being fed cheese that’s carefully sliced on a $3000 blade, I can understand why. Bidding on this item started at just $25, then climbed up to $3000 within an hour. To my surprise, that’s actually a very good deal! The same item — which is marketed here as a prosciutto slicer, rather than a cheese slicer — costs $16,525 from a restaurant supply website. Were they running a Michelin star Italian eatery on the sixth floor of Twitter? Imagine getting laid off from a company that owns $16,525 cheese/proscuitto slicers. I hate to say it, but I kind of understand some of Elon’s woes here. Weirdness: 8/10. I am actually kind of pissed off that this exists. How many blue checks is this worth?: Well, if these slicers are worth… $16,525… let’s shave off a third of the price since it’s a used item. That brings us to about $11,000, or 1375 blue checks. Do I actually want to own this?: No! There is no corporate kitchen that should own this! I promise you, the pre-sliced proscuitto at Trader Joe’s is perfectly fine!

Missing Attachment Behold, this lot is one of the only listings in which it was unclear what it was at first glance. It appears we have here a photo booth, and by booth, we mean a vintage-looking camera box that actually just holds a Canon EOS Rebel T3i, an entry level, budget-friendly DSLR. However, this does come with a Profoto light, which runs for about $1100 used. But wait, there’s more! You also get some fun photo booth props. From the photo, we can see a Twitter logo (classic), a slice of pizza and pie, some emojis, and there’s also a tennis racket there — it’s unclear if that is part of the lot as well, what kind of condition the racket is in, etc. Weirdness: 8/10. This is pretty weird, but it mostly feels weird that they are hiding an average DSLR inside of a vintage photo box thingy. How many blue checks is this worth?: Between the camera, the Profoto light, and the various knick knacks, I’m going to price this at about $1600. Which, divided by eight, brings us to 200 blue checks. Do I actually want to own this?: Not to brag, but I own a full-frame Canon DSLR, so I really have no use for a T3i. That flash could be very nice though. And hey, who knows, that tennis racket might be salvagable.

A bird statue that doesn’t even light up

Missing Attachment The neon bird sign? Fine, I get it. Neon signs are cool as hell. Yet this bird statue is currently up for $9,750, whereas the current bid on the neon sign is $4,600. There is no way that this thing is two times as cool as the neon sign. It’s just a statue! I am now wondering if there is some sort of secret significance to this statue that I don’t know about — like if you tap on it exactly seven times, a glowing eye will emerge that deports you to a secret pocket dimension. Stranger things have happened in Silicon Valley. Weirdness: 9/10. This isn’t that weird in itself, but it’s weird how in demand it is. How many blue checks is this worth?: Gonna make a wild guess and say it’ll sell for $20,000? Yes, I hate it too, but we still have a day left on the auction and we need to be smart about our guesses here, or else we might get made fun of on Twitter. This brings us to 2500 blue checks. Do I actually want to own this?: No, but I think it would be funny to take this statue and drop it in front of the Meta headquarters or something.

A seven-foot succulent planter in the shape of an @ sign

Missing Attachment Here’s my opinion, take it or leave it. This is the coolest item up for auction at Twitter HQ. To start, I love plants, and as the listing kindly informs us: “Currently Artificial Plants but can be placed with real plants.” This also sparks joy because it’s not explicitly Twitter memorabilia — after all, Twitter is not the only social network that uses @ handles. This is simply just a beautiful sculpture for the biggest internet nerd in your life. Weirdness: 10/10. I don’t know why this exists, but I am very happy it does. How many blue checks is this worth?: Let’s go with $5000, or 625 blue checks. Do I actually want to own this?: Genuinely, yes. Can I fit a seven-foot-tall sculpture in my apartment? Nope! Can I make it work if I try hard enough? Yes, bring it on. It’s time to bid on Twitter’s giant neon bird light by Amanda Silberling originally published on TechCrunch