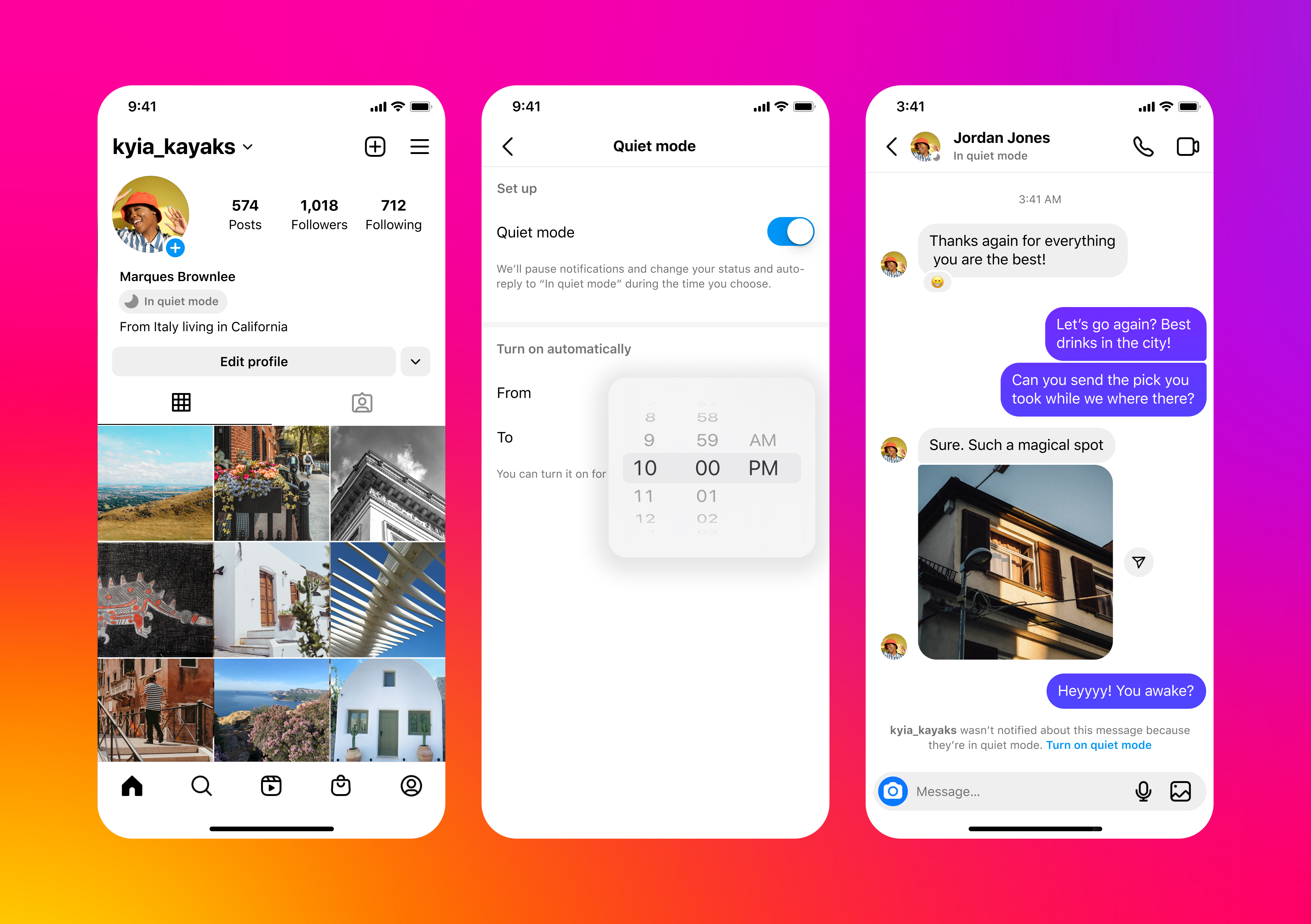 The update is one of several changes rolling out today, which also include expanded parental control tools and other tools to manage recommendations. The launches come as Instagram works to make its app less of a target for regulators and lawmakers who have been concerned with social media’s potential harms, particularly for teenage users. To date, Instagram has added several teen safety features, including those to protect teens’ privacy and reduce unwanted adult contact, limit ad targeting, restrict teens’ access to mature content, and other to help parents monitor and manage their teens’ Instagram use through parental controls. Quiet Mode joins a handful of other screen time management tools Instagram now offers, including daily time spent controls that allow people to track their app use and send themselves alerts, those to configure”take a break” reminders after individual app sessions extend beyond a certain amount of time, and various tools to pause, snooze and unfollow pages, groups, and people to help further reduce engagement with addictive or otherwise unwanted content. With the new Quiet Mode feature, however, the idea isn’t just to introduce a tool that pushes users to take a break. Instead, it focuses on the real-world impacts that accompany trying to step away for a bit from an app that you regularly use — and one where others expect you to be available. For young people in particular, Instagram has grown to become a popular messaging tool — so much so that the company in years past launched two different variations on standalone messaging apps, Direct and Threads. (The latter was shut down in 2021.) While breaking out messaging as its own separate experience didn’t work out for Instagram, messaging remains a key draw for the app. For Instagram’s heaviest users, that means not answering DMs is right up there with ignoring text messages — it’s something that’s considered rude, even though some teens admit that the expectation to be constantly available can be stressful. With Quiet Mode, Instagram users can choose to take a break — to study, to sleep, or to otherwise disengage. It’s sort of like the Instagram equivalent of turning your instant messaging light off, for those who remember the AIM and ICQ era. When you exit Quiet Mode, the app will offer a summary of what you missed during your downtime to help you get caught up. Instagram says teens will be prompted to enable the feature when they spend a “specific” amount of time on Instagram at night, but Quiet Mode will be offered to all users. Quiet Mode is launching first to users in the U.S., United Kingdom, Ireland, Canada, Australia, and New Zealand, and Instagram says it hopes to roll it out to more countries soon. While Quiet Mode was the highlight of today’s news, Instagram is rolling out a handful of updates as well. One is the newly added ability for parents to see the accounts their teen has blocked, when using Instagram’s built-in parental control tools. This could make it easier for parents to have discussions with their teens so they can talk about the change, if need be. Instagram is also letting users better control what shows up for them on the app’s Explore page. This is something that’s algorithmically driven by user behavior, though doesn’t always reflect what a user wishes they were seeing. In fact, there was a hilarious viral thread on Twitter just the other day about this, related to a complaint about too much adult-oriented content appearing on some people’s Instagram’s Explore tab (referred to in the thread as the “Discover” tab.). As many people pointed out in the replies, this tab is driven by an algorithm that shows you what you might like, based on your app usage. That means you’ll only see “adult” content if that’s what you view and interact with — meaning those complaining were just “telling on themselves.” Other people’s Explore tabs may be filled with kittens or art or tattoos or cooking or fashion, and other innocuous content, users agreed. (The thread also offered a fascinating glimpse into what people’s Explore pages look like, if you’ve ever been curious about the variety!) Going forward, Instagram says users will be able to hide multiple pieces of unwanted content from Explore at once. Plus, if you select “Not Interested” on a post in Explore, Instagram will try to avoid showing you this same type of content going forward elsewhere in the app’s recommendations — like Reels, Search and more. Missing Attachment A final tweak to users’ recommendations will be driven by blocked words. If you’ve already configured Instagram to hide comments and DMs with certain words, emojis or hashtags, that block will also apply to recommended posts across the app. That means if you block a word like “fitness” or “recipes,” the company explains, it won’t show you content where those words appear in the caption or hashtag. Missing Attachment This seems an attempt to address the problem where searches for things like “workout tips” or “healthy recipes” easily lead users to content associated with extreme dieting and eating disorders. This topic had been the focus of a 2021 Congressional hearing about the harms to teen mental health that comes from using apps like Facebook and Instagram. As U.S. lawmakers have yet to take serious action here, Meta is again attempting to regulate itself on the matter by putting the controls in the hands of the end user, rather than holding itself accountable for algorithmic failures. While Quiet Mode is only launching in select markets, the other updates are rolling out globally to iOS and Android, we understand.   Instagram’s new ‘Quiet Mode’ helps you take a break from the app by Sarah Perez originally published on TechCrunch