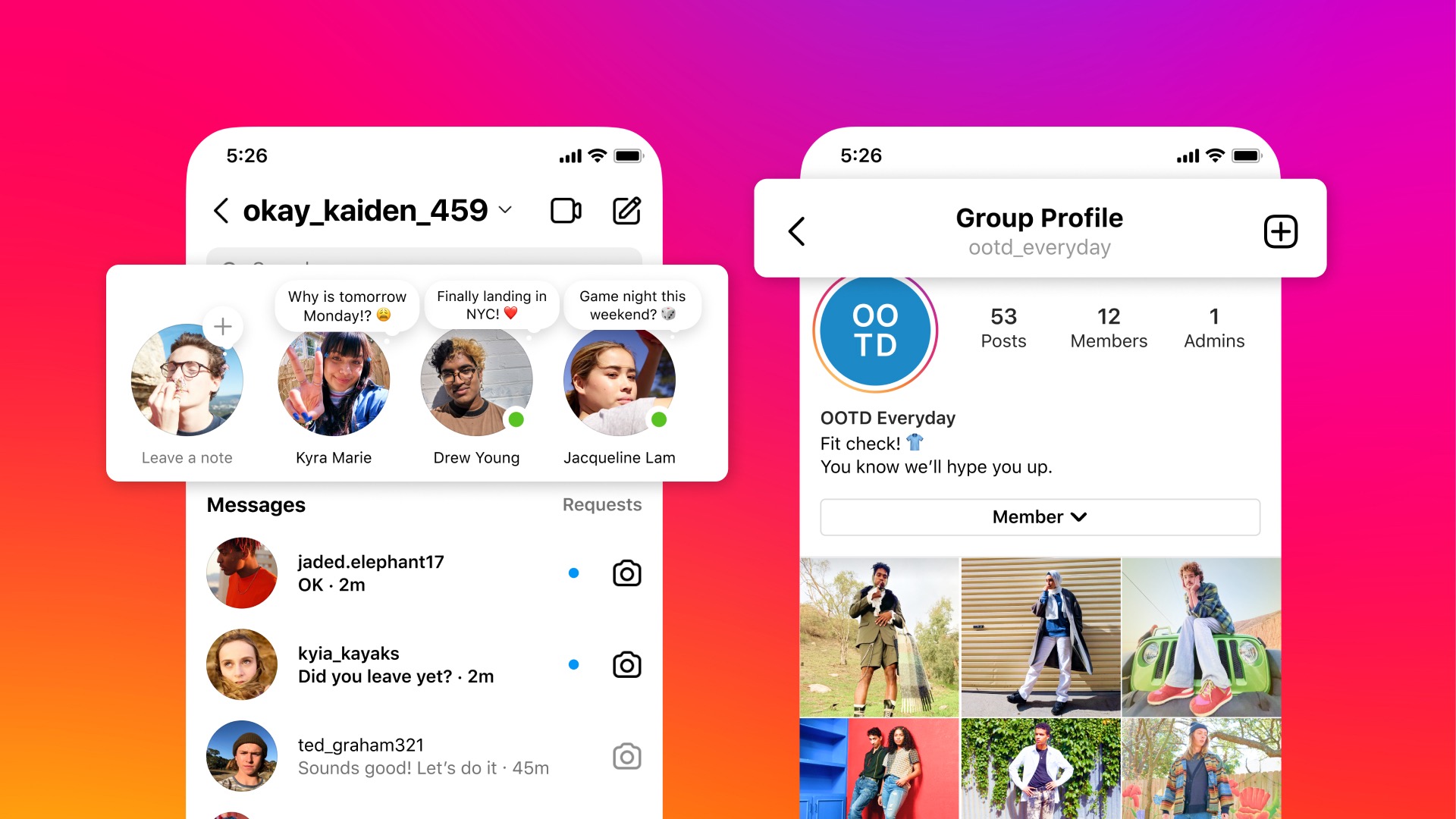 Of all the new features being announced, Instagram Notes is perhaps the most interesting as it introduces a way to communicate with other users publicly, using just text. While that’s obviously reminiscent of a platform like Twitter, the current implementation has a much different user interface. In Instagram, users can leave notes by going to the top of their inbox, then selecting the followers they follow back (aka mutuals) or others from their existing “Close Friends” list who they want to read the note. They’ll then type out the note itself using 60 characters of just text or emoji. The note will appear at the top of friends’ inboxes for 24 hours and replies will arrive as DMs. Missing Attachment Instagram said that during testing it found people appreciated having a way to start conversations in a lightweight way. So while the format itself differs from Twitter’s real-time feed, the use case for Notes could have some overlap as the company described the feature as a useful way for users to share “what they’re up to” or ask for recommendations. Twitter today prompts users for similar input. When you go to compose a tweet, for example, the app asks you to share “What’s happening?” And like Notes, it had a contained text input limit. (Though that will now grow, Twitter owner Elon Musk said.) Meanwhile, The New York Times reported last week how Meta was considering turning Instagram Notes, which has been in testing for many months, into a more fully-fledged Twitter rival. The report said the company had been weighing whether Notes should even be its own standalone app or another feed inside Instagram. For the time being, however, it appears Instagram is launching Notes as is. Another set of new features targets Instagram Stories. One is an update to the “Add Yours” feature launched last year, which encourages others to participate in your trend by sharing their own variation. Now, Instagram is testing an update where you can specifically invite friends to participate by tapping “pass it on” when you see a trend that you think they’d like. Missing Attachment Instagram is also now testing “Candid,” a way for friends to share Stories that are only visible to others who also share their own Candids. This feature is an obvious competitor to BeReal, which locks friends’ content behind a blurred screen until you also post. And like BeReal, Candid sends out daily notification reminders. TikTok is trying a similar feature with its TikTok Now posts that appear in users’ feeds. Missing Attachment Instagram says users can capture a Candid from the Stories camera, the multi-author Story at the top of the feed, or from the daily notification reminder. Two other features focus on improvements to group sharing. Group Profiles are a new type of profile for sharing posts and stories with friends. Content shared to a Group Profile is shared with group members instead of your followers and gets posted only to the Group Profile, not your own profile. This seems to respond to how many younger people are already using Instagram — to post content to groups for their school, for example, or around some sort of theme. Before, these accounts would be managed by only select people with the account login. Group Profiles could prompt greater participation. Missing Attachment Collaborative Collections are another new way to connect with a group of friends. In this case, the idea is to allow a group to connect over a shared interest by saving posts to a new “collaborative collection” in a group or via 1 to 1 direct messages. Users can add to a collaborative collection by saving a post they come across in their feed or by sharing it with a friend over DM, then saving it from there. It’s essentially an expansion of the existing Collections features, but one that helps you build that collection with others. This could be useful for gathering together travel ideas for a group trip or sharing recipes, for example. Missing Attachment Instagram says the Notes feature is rolling out now, while other new additions are being considered more of a test. Instagram now supports text updates with launch of Notes, adds other new sharing features by Sarah Perez originally published on TechCrunch