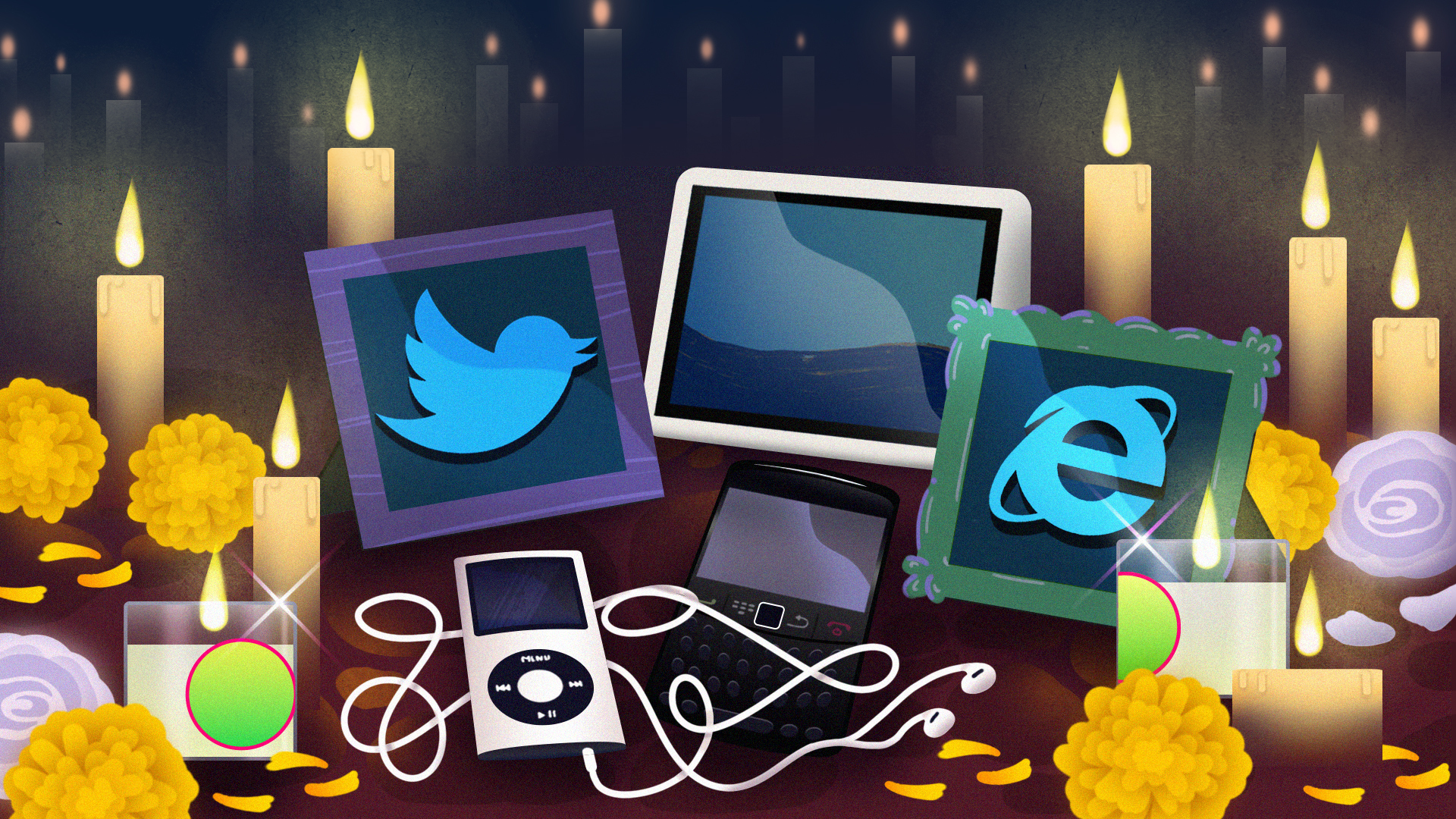 As we look back on 2022, it’s important to take some time and pour one out for the tech we lost this past year. Whether these products, platforms, and companies lived a long life or barely made it past the pilot stage, burned too brightly like a star or slowly faded away into obsolescence, they all left their mark in some way.Saying goodbye was hard for some. Losing the iPod and the BlackBerry, however brief in human years, was a lifetime in tech years, causing millennials to reminisce like grandparents. The passing of others like Meta Portal and FTX felt more like a cautionary tale than the celebration of a life well-lived. If only for posterity, their contributions deserve reflection and remembrance. So join us as we look back on the tech that died this year. Oh, and sorry in advance, but we couldn’t get John Legend to perform a song for this.

This one hits hard for millennials. Before there was the iPhone and Spotify, there was the iPod and iTunes. It’s not hyperbole to say the iPod revolutionized the music industry: It legitimized a pay model for digital music, disrupted the need for an “album,” and made everyone (and their grandmother) a DJ. Sure, there were other MP3 players around at the time — remember Zune? But they were bulky and didn’t have much storage space. But with the right marketing (Feist, anyone?), design, and ample storage space, Apple CEO Steve Jobs saw and seized a golden opportunity.Led by chief engineer Jon Rubenstein and MP3 developer Tony Fadell, the first-generation iPod was released in 2001. It was cute, compact, and could hold thousands of songs. Cue the revolution: iconic ads, the beginning of the end for CDs, a lifeline for The Office with the release of iPod video. The iPod paved the way for portable access to music and videos at our fingertips that we take for granted today.But as the saying goes, all good things must come to an end. When the iPhone was released in 2007, the iPod began its slow descent into obsolescence. In May 2022, Apple announced that it would be discontinuing the iPod touch which, at the time, was the only remaining iPod on the market. As Mashable’s Alex Perry put it, “While it’s sad to see the iPod line cross the rainbow bridge, 20 years is a hell of a run.” images-1.fill_.size_2000x1531.v1670266719

Y2K phone trends have made a comeback, but BlackBerry wasn’t invited to the reunion. In the early 2000s, the BlackBerry was the ultimate status symbol. Owning a BlackBerry signified a coveted level of importance and clout that appealed to US Weekly celebrities and Wall Street finance bros alike. Back then, the alternative was the flip phone with its tedious T9 texting and zero smart capabilities. But the BlackBerry had a full keyboard, email capability, and, of course, its BBM messaging platform which was the height of tech exclusivity. But then came the iPhone and all of the other touch screen smartphones, and suddenly pressing physical keys felt dated and uncool. BlackBerry kept a cult following of people who liked its QWERTY keyboard, but even Kim Kardashian’s influence couldn’t keep it alive. What made the BlackBerry so iconic was what ultimately led to its demise: the keyboard and BBM. Rather than leverage its unprecedentedly loyal following, the company failed to evolve with the touch screen market and missed the opportunity to expand BBM to a larger market. After some brief hope of a resurrection, BlackBerry officially died in early 2022. R.I.P. to an OG mobile legend.images-2.fill_.size_2000x1505.v1670266719

iPhone mini, we hardly knew ye. At the 2022 iPhone 14 event, the 5.4-inch version of the iPhone was conspicuously missing from the lineup. The diminutive device’s life had been cut short after only two generations. This wasn’t a surprise to Apple followers. Sales for the iPhone 12 mini and iPhone 13 mini underperformed. But small-handed iPhone users (like me) mourned the loss of its compact size, which slid oh so easily into a tight pants pocket. Nonetheless, public demand handed down its ruling: When it comes to iPhones, bigger is better. images-3.fill_.size_2000x1334.v1670266719

To say Meta had a rough year is an understatement. It kicked off 2022 by losing $237 billion dollars overnight, tried (and failed so far) to be like TikTok, and no one seems to get Mark Zuckerberg’s metaverse vision. Despite losing $10 billion on virtual reality investments in 2021 Zuckerberg is still all in on metaverse projects with its Quest VR headsets and metaverse platform Horizon Worlds. But the “make Mark happy” or M.M.H. approach that Meta employees informally call it comes at the expense of massive layoffs and killing off Meta Portal.Giving up on Meta Portal was low-hanging fruit in terms of cutting costs. The video calling smart display had already been phased out as a consumer device and never made much revenue. It also faced fierce competition with the iPad, Amazon Echo, and Google’s Nest hub. More than anything, the death of Meta Portal signifies Zuckerberg’s singular focus on the metaverse. In the note following the layoffs of 11,000 employees, Zuckerberg said Meta would consolidate its resources into a “smaller number of high priority growth areas,” of which the metaverse is at the center. Ultimately, Meta Portal gave its life to help the metaverse succeed. Let’s just hope that pans out for Meta’s sake.images-4.fill_.size_2000x1125.v1670266719

Google has a reputation for announcing and killing projects — there’s even a site dedicated to Google’s software graveyard. It may be cutthroat, but the tech giant didn’t get become what it is today by supporting products with lukewarm demand.Google Stadia’s launch in 2019 showed massive promise for the future of cloud-based game streaming. But unfortunately, Stadia never managed to gain much traction with users and Google announced in September that it would be shutting down.As one final gift before it departs the mortal realm, Stadia is refunding hardware and cloud game purchases made through the Stadia store. Plus, Google will be licensing the underlying technology to third parties, so Stadia will live on in an undead kind of way. images-5.fill_.size_2000x1334.v1670266719

2022 was the year Microsoft finally put Internet Explorer out to pasture. Even in its prime, it wasn’t a good browser. And in its later years it was swiftly relegated to obscurity with the rise of Google Chrome. But it’s hard not to feel nostalgic about the app that was the gateway to the internet for so many kids growing up in the 90s. Mashable’s Alex Perry best describes the complicated relationship that early internet users had with Internet Explorer:

Yes, for much of its existence, IE was one of the worst browsers you could use. Depending on the year and what you were doing with it, some sites wouldn’t even display correctly, or you’d get dozens of pop-ups, or even open up your Windows XP machine to a barrage of viruses. PC users of a certain age may recall loading up IE after a parent or grandparent used it to find seven illegitimate browser toolbars taking up half the screen because of malware.

Having said all that, though, it’s also worth remembering IE as the first door to the internet for a lot of people (if they didn’t use Netscape Navigator first) because it was pre-installed on every Windows PC from 1995 onwards.

You’ve heard the saying, “Don’t speak ill of the dead.” Well, too bad, because we’re going in hard.But what if the dead, or bankrupt cryptocurrency exchange in this case, lost a million people’s crypto investments and possibly committed fraud? FTX was known for being a trustworthy and user-friendly trading platform for cryptocurrency. It spent big bucks on sponsorships with sports teams and deals with high-profile athletes like Tom Brady and Steph Curry to market crypto trading to mainstream consumers. But any crypto goodwill FTX built up in its short life has been annihilated by its calamitous death.After a bank run triggered by liquidity problems, the company went bankrupt, but that wasn’t the end of the story. Now, reports say at least $1 billion of customer money has “apparently vanished” and the U.S. Department of Justice is investigating FTX for fraud. The spectacular fall from grace for FTX and former CEO Sam Bankman-Fried is a major blow to cryptocurrency, which has already had a disastrous year. images-7.fill_.size_2000x1334.v1670266719

Even before the Elon Musk takeover, Twitter was already a toxic place. All Twitter users are familiar with the feeling of rage from reading an inflammatory thread or the quiet despair of watching impulsive discourse unfold online. Yes, we loved to complain about how bad it was for our mental health or how much time we wasted on mindless scrolling, but we kept going back to it. Partly we relied on Twitter as a news source or wanted to for entertainment, but also because we hoped it would improve. There were plenty of bots and trolls spewing their worst, but there was also a content moderation team, clear and enforceable rules of engagement, and promising efforts to improve the platform. Since Musk has taken the helm, Twitter has seen a disastrous verification overhaul, lost half of its top advertisers, and a rise in hate speech according to the Center for Countering Digital Hate. Musk also laid off around 3,700 Twitter employees, including 15 percent of the content moderation team, and suspended the account of several journalists without explanation, including Mashable’s Matt Binder.A lot can be said about the new Twitter, but the Twitter we loved to hate is dead. Now we just…hate it. images-8.fill_.size_2000x1334.v1670266719

This one goes out to all the Holmies

Theranos, the biotech company that claimed it could process hundreds of tests from a single drop of blood, has been dead for years. But founder and CEO Elizabeth Holmes’ guilty sentence this year brings a poetic finality to a very public high-tech grift. In November 2022, Holmes was sentenced to 11 years of prison for defrauding Theranos investors. For several years Holmes managed to convince people she was the second coming of Steve Jobs. With her black turtleneck, unblinking stare, and suspiciously low voice, she conned two former U.S. Secretaries of State, Rupert Murdoch, Bill Clinton, Walgreens, and many others into investing, partnering, or publicly supporting Theranos. But it all came tumbling down with John Carreyrou of The Wall Street Journal’s dogged investigation of Holmes’ web of lies. Holmes fall from grace as the youngest female self-made billionaire to convicted fraudster will go down in history as one of the great Silicon Valley scams. And the story made for some great TV. This year, Hulu aired its series The Dropout starring Amanda Seyfriend in a fictionalized version of the events. The streaming show aired before Holmes’ verdict, but in the court of public opinion, she was already guilty. The court verdict was just a foregone conclusion.