Here’s what went down during the FTX Congressional hearing 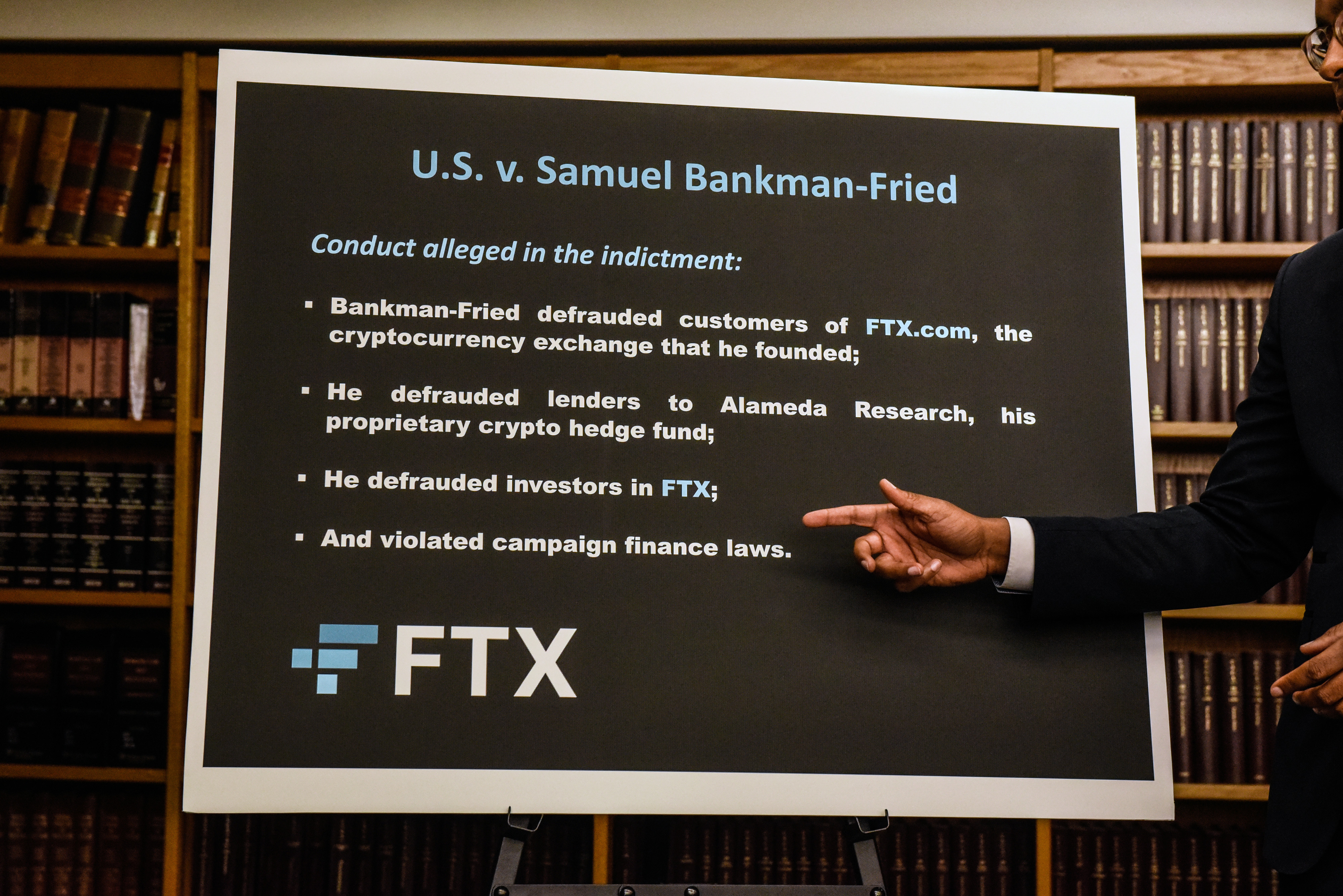 Sam Bankman-Fried, the founder and now-former CEO of the failed cryptocurrency exchange FTX, was originally planning on providing testimony at a Congressional hearing on Tuesday regarding his bankrupt empire. However, there was a change of plans when Bankman-Fried was arrested the night before in the Bahamas on a series of criminal charges related to FTX’s collapse.But, the U.S. House Committee on Financial Services went on with the hearing. And, while it would have been interesting to hear from Bankman-Fried, or SBF as he is also known, FTX’s new, post-bankruptcy CEO John Ray III was still there to provide testimony.Obviously having SBF there to provide his testimony in public would have been preferable, and many Congressmembers voiced their disappointment in the timing of his arrest. But SBF had already made his voice heard in a series of live interviews with everyone from the New York Times to smalltime crypto advocates in live-audio Twitter Spaces since the failure of FTX. And each time SBF provided a lot of hemming and hawing.With Ray as the sole witness, Congress was able to focus on what the new FTX CEO has so far uncovered rather than whatever spectacle and back-and-forth debate SBF would’ve provided.

Things started to unravel for FTX last month after a series of reports was published that exposed FTX’s trading firm, Alameda Research, as potentially insolvent. Binance, a competing exchange, decided to sell off its holdings in FTX’s crypto token, FTT, on this news. Soon after, an avalanche of customers began withdrawing their funds from FTX. During this time, as the global exchange FTX.com began to fall apart, SBF maintained that the U.S. exchange, FTX US, was not impacted as the two were operated as separate entities.  By the time FTX filed for bankruptcy on Nov. 11, it was obvious that the two were not separate at all, given that FTX US was included in the filings. In addition, news had broken that customers’ funds that were deposited with FTX had been secretly sent to Alameda for the purpose of investing.Chairwoman of the House Financial Services Committee, Rep. Maxine Waters (D-CA), asked Ray directly if there was independent governance between these supposed separate institutions. “The operations of the FTX group were not segregated; it was really operated as one company,” he stated, explaining how funds from both exchanges were stored together.Later in the hearing, Ray explained even more straightforwardly saying there was “no distinction” between FTX and Alameda Research.”There’s no independent board,” Ray addressed the corporate structure of FTX and its affiliated entities such as Alameda and FTX US. “There was one person controlling everything.”

Perhaps the most viral moment of the hearing came during questioning from Congresswoman Ann Wagner (R-MO). Tweet may have been deleted (opens in a new tab) CEO John Ray had previously stated that he had never in his career “seen such a complete failure of corporate controls and such a complete absence of trustworthy financial information as occurred here.” Remember that Ray is the restructuring lawyer who was brought into clean up Enron after the company infamously collapsed in 2001.Rep. Wagner stressed how Ray was calling FTX worse than Enron by saying that and asked him to elaborate.”The FTX group is unusual,” Ray stated. “Literally, there is no record-keeping whatsoever.”Ray detailed how FTX employees would “communicate invoicing and expenses on Slack,” the instant messaging and chat program popular within a lot of tech companies.And then Ray dropped another bombshell.”They used Quickbooks,” he stressed. “The multi-billion dollar company using Quickbooks…””Quickbooks?!” Rep. Wagner interjected, sounding surprised.Quickbooks is an accounting software by Intuit, which is mainly geared towards small businesses.”Quickbooks,” replied Ray. “Nothing against Quickbooks. It’s a very nice tool. Just not for a multi-billion dollar company.”

As explained earlier, SBF was originally supposed to attend the hearing virtually in order to provide his own testimony. His arrest the night before the hearing changed those plans.However, Forbes obtained SBF’s testimony right as the hearing began. And Rep. Emanuel Cleaver (D-MO) was very unhappy with what he saw.”Disrespectful…absolutely insulting,” Rep. Cleaver said, describing the opening of the testimony before commenting that he cannot read it publicly. “This is the Congress of the United States.” Tweet may have been deleted (opens in a new tab) So, what was in SBF’s opening testimony? How did he want to introduce himself to Congress? “I would like to start by formally stating, under oath,” SBF writes. “I fucked up.”From there, SBF’s testimony is a defense of his actions without claiming any responsibility for potentially criminal wrongdoings. He even goes as far as blaming CEO Ray, who had nothing to do with FTX until after the company filed for bankruptcy.

FTX was a mess

According to CEO Ray, there was no accounting department and no human resources at FTX. When asked about a compliance department at this failed financial institution, Ray simply replied that there were people with “titles.” FTX’s difficulties in establishing a bank account for customer funds came up when it was Missouri Republican Blaine Leutkemeyer’s turn.Ray said that “the bank situation should’ve really been a red flag.”Again, FTX CEO John Ray is the guy who came in after Enron collapsed. Yet, at the hearing he claimed that the documentation at FTX is “one of the worst” he had ever seen, calling the “paperless bankruptcy” situation at FTX “unprecedented,” and saying it made things very difficult to trace and track.”In one instance, [SBF] signed as both the issuer of the loan as well as the recipient of the loan,” Ray gave as an example, explaining how it’s unclear what this particular loan was even used for.Kentucky Republican Andy Barr questioned Ray about the audits done on FTX. For example, an ESG rating firm gave FTX a higher rating than Exxon-Mobile in its governance assessment. Ray quipped that he’d ask for a refund on that. When Rep. Barr followed up, Ray gave probably the most succinct summary of the entire FTX collapse.”Well, we’ve lost $8 billion, so by definition, I don’t trust a single piece of paper in this organization,” Ray said.

Congress was mostly on the same page

This was a hearing from the U.S. House Committee on Financial Services, yet it was also very much a tech hearing, as cryptocurrency was a central issue in the discussion surrounding the failure of a major cryptocurrency exchange.And as far as tech-related hearings go in Congress, this was probably one of the least confrontational I’ve come across in some time. Both Democrats and Republicans stayed on target, focusing on the alleged activity of SBF and FTX as a whole.There were crypto defenders who tried to advocate for cryptocurrencies’ still-unfulfilled potential. Minnesota Republican Tom Emmer, for example, tried to place blame on the U.S. Securities and Exchange Commission (SEC) and “centralization” for what had happened with FTX.However, more progressive members of the House shot back in what appears to be a growing crypto skepticism among elected officials. Michigan Democrat Rashida Tlaib blasted the crypto industry as “predatory.” California Democrat Brad Sherman urged his colleagues not to “trash Sam Bankman-Fried and then pass his bill,” referring to the Digital Commodities Consumer Protection Act, a piece of pro-crypto legislation that has been referred to as “SBF’s Bill.”And there appeared to be shaken confidence among some of the pro-crypto voices in the room too: “My patience with the crypto bulls is wearing thin,” said Massachusetts Democrat Jake Auchincloss.As Web3 is Going Great creator Molly White pointed out in her live tweets, Rep. Auchincloss has a “very supportive” rating in Coinbase’s Congressional crypto sentiment database.”It’s been 14 years and the American public has heard lots of promises but has seen lots of Ponzi schemes,” Rep. Auchincloss continued. “It’s time to put up or shut up.”