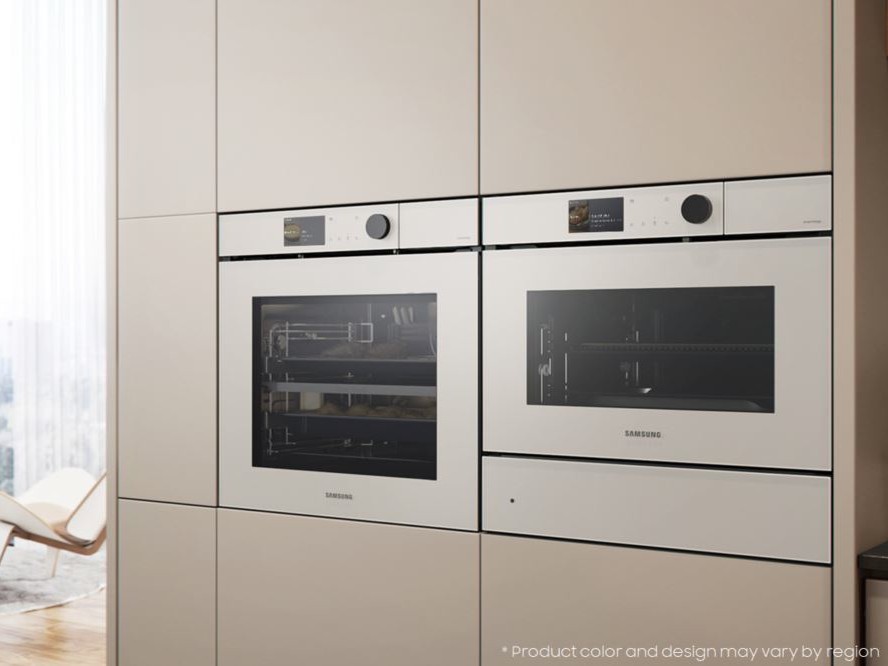 As my colleagues on the ground traverse the show floor (I’m covering CES remotely this year), they’re highlighting the most interesting AI-powered tech they come across. I’ve compiled each into a handy list, which is far from definitive, but which aims to give an idea of the top AI trends this year at CES.

New_Bespoke_Kitchen_Lineup_PR_dl5-1 Samsung kicked off CES 2023 with a new oven and fridge in its Bespoke Home smart appliances lineup. Not just any oven, the Bespoke AI Oven features an internal camera and sensors that proactively recognize more than 80 dishes and ingredients to optimize cooking settings. It can send a warning notification if it detects food might be burning. And if you’re stumped on what to cook, the Bespoke AI Oven recommends meals based on ingredients at home. The Bespoke AI Oven’s camera, by the way, can stream a live feed of what’s cooking in the oven to streaming platforms like Twitch. It’s not an AI feature exactly, but eye-catching all the same. As for the 4-Door Flex, Samsung’s newest smart fridge, it packs an AI-powered camera that scans food labels to keep track of what’s in stock — and not in stock. Samsung’s previous-gen fridge had the same (as do rival models from LG), but the novelty of this year’s 4-Door Flex is a larger touchscreen on one of the doors.

Samsung_OLED_1672824684975_1672824699140_1672824699140 Not to be outdone, Samsung also introduced a new lineup of TVs with an AI-powered “auto-HDR” mode. The company’s Neo QLEDs offer Auto HDR Remastering, which Samsung says “uses AI deep learning technology to analyze and apply real-time high dynamic range (HDR) effects on standard dynamic range content on a scene-by-scene basis.” (HDR increases the contrast between the brightest whites and darkest blacks a display can produce.) The system compares non-HDR content with HDR material and uses machine learning to analyze the differences and then make the conversion. Rival LG debuted TVs with AI, too. The 2023 Z3, G3, and C3 OLED TVs feature a mode that can automatically detect and refine certain objects and like faces, to have more “lifelike,” colorful qualities. Another mode, AI Sound Pro, attempts to emulate a surround sound setup using only the built-in stereo TV speakers.

1672764487_nvdia_rtx_video_super_resolution_1 Nvidia’s using AI to upscale old, blurry YouTube videos. During its CES presser, the company demoed RTX Video Super Resolution, a feature coming next month to all Nvidia 30- and 40-series GPUs. When enabled, It’ll upscale videos played in Chrome and Edge on a PC to the equivalent of 4K, similar to the AI upscaling feature that’s long been available on the Shield TV and Shield TV Pro. According to PCGamer (via The Verge), RTX Video Super Resolution — which also sharpens and reduces artifacts in videos — will support any video with a resolution of between 360p and 1440p up to a frame rate of 144Hz.

CZ-Smart-YouQ-Intro-Shot_NewDials Wearable brand Citizen dipped its toes into the AI space this year with its second-gen CZ Smart watch. The 2023 CZ Smart — which runs Wear OS 3, the newest release of Google’s firmware for wearables — sports what Citizen’s calling a “self-care advisor” driven by AI. Leveraging tech from IBM Watson (IBM’s AI research division), the CZ Smart attempts to determine a wearer’s “chronotype” after collecting roughly a week’s worth of sleep data to provide tips that help to combat fatigue. To improve the relevancy of the recommendations, users can take gamified tests based on NASA’s Psychomotor Vigilance Test, which was originally developed to give astronauts on the International Space Station feedback on their fatigue levels. The CZ Smart tabulates the results to calculate an “alert score” capturing the wearer’s level of tiredness at a particular moment. It’s worth noting that the CZ Smart isn’t the first wearable to track sleep and give suggestions to improve it — far from it. Samsung, Apple and Fitbit among others offer features on their various wearables to analyze and track sleep. But Citizen’s making the case that the CZ Smart is more holistic than most.

PC-Gaming-Lights_1672812328699_1672812338785_1672812338785 For gamers in pursuit of a more immersive experience, Govee introduced the AI Gaming Sync Box Kit at CES 2023. It’s a bit of a mouthful, but the tech behind the AI Gaming Sync Box Kit — Govee’s answer to the Philips Hue Play HDMI Sync Box and Nanoleaf’s recently launched Sync+ — sounds promising. Using AI trained on footage of “dozens” of different video games, the set-top box syncs (via HDMI and Wi-Fi) Govee-branded smart lights to whatever games you’re playing. One of 30 or so lighting effects trigger for certain in-game achievements and on-screen events. As the company explains in a press release: “For example, when accomplishing a ‘triple kill’ in a competitive shooting game, a customized corresponding in-game lighting effects will show at once with near-zero delay. With Govee AI, products don’t transfer data to the cloud but instead directly transmit it back locally in real time, ensuring the utmost protection of user privacy.” Govee says that its AI-based tech mitigates the issues typically experienced by lighting sync boxes, like “low color-capture accuracy” and slow performance. The jury’s out on that. But in any case, it’s certainly one of the more innovative approaches we’ve seen.

Bird_Buddy-header Bird Buddy, the startup my colleague Devin Coldewey covered a number of years ago, is back with a new and improved model of its “smart” feeder that snaps photos of bird visitors and beams them to a companion app. Equipped with a high-speed camera, the next-gen Smart Hummingbird Feeder can take photos and videos of birds with wing speeds of up to 60 mph. The camera’s triggered by motion and sends photos through an AI system trained on millions of photos to identify around 1,000 species of birds. Future owners of the Smart Hummingbird Feeder — it’s a prototype currently, and hasn’t yet been priced — will also benefit from what Bird Buddy’s calling Heartbeat Map, which lets people track bird sightings in real time. Meanwhile, the aforementioned Bird Buddy companion app allows owners to build out their collection of identified birds, track birds’ visits over time, learn about their habits and share photos with the community.

230104143009-gluxkind-stroller You’ve heard of self-driving cars, but what about self-driving strollers? The Ella smart stroller by Canadian startup Glüxkind is a “hands-free” motorized buggy that uses AI to detect obstacles and danger on the pavement. Packed with sensors including cameras, the Ella can drive itself when empty, keep up with parents while they hold their infants and stop automatically if it encounters an obstacle. The buggy’s cameras track moving and stationary objects such as people and bikes, alerting parents to potential collision dangers through sounds and flashing lights in the handle. As for the Ella’s motors, they aid when manually pushing the stroller, assisting with inclines and automatically braking when going downhill or stationary. The Ella isn’t lacking in creature comforts, either, featuring an automatic “rock-my-baby” feature that sways the carriage back and forth on the stroller’s wheels and a built-in, customizable white noise machine. There’s even a companion phone app that tracks the Ella’s routes and distance and can locate the stroller if lost.

DSC08871 Gather ’round, pepper growers. There’s a new robot in town that promises to make your life a bit easier. Developed by Japanese agritech startup Agrist, the robot can identify and pick “harvest-ready” bell peppers even when those peppers are covered by a thick layer of leaves. Using a combination of cameras and computer vision models trained for different parts of the pepper, the robot can identify each pepper’s position, size and maturity as well as its clipping point. The robot moves along suspension wires that can be retrofitted to existing farms. A mechanical arm does the picking and clipping, placing harvested peppers into a collection box. Agrist claims that, over time, the robot’s software can begin to predict crop volume and offer suggestions on how to optimize growth by collecting data and analyzing the number of days required for peppers to mature. ces-2023-banner-35 Here’s a roundup of the top AI-powered products we saw at CES 2023 by Kyle Wiggers originally published on TechCrunch