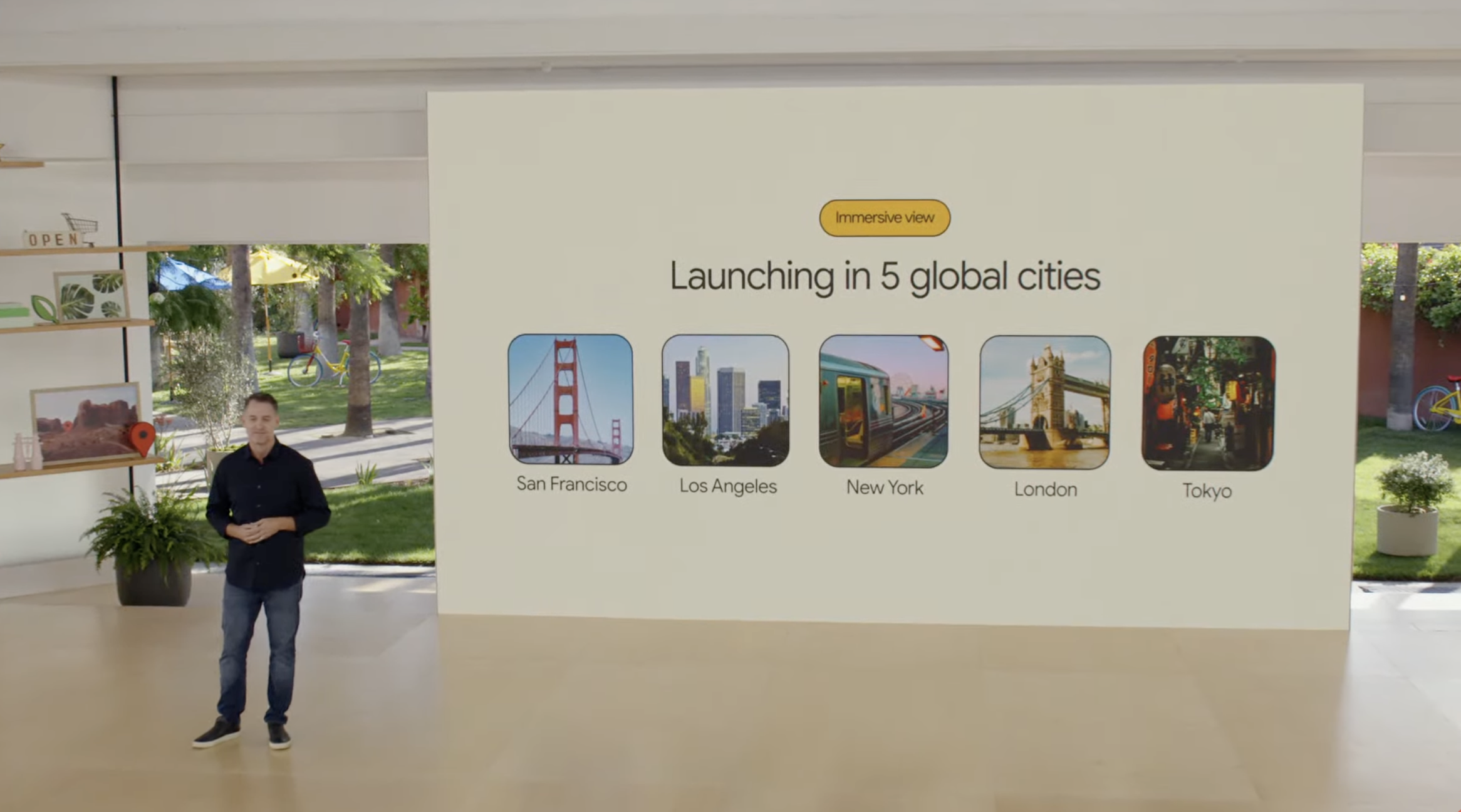 The company says all of the features announced today are part of its efforts to build a visual-first Maps experience to help users navigate the world more naturally.

The upcoming Immersive View feature, which Google first announced at I/O in May, is designed to help you plan ahead and get a deeper understanding of a city before you visit it. Immersive view leverages a combination of computer vision and AI technology to fuse together Street view and aerial imagery with what the weather, traffic and crowds will be like on a given day and time. The feature allows users to explore by visually soaring over an area to see what it may look like. Using predictive modeling, Immersive view automatically learns historical trends to determine what an area will be like tomorrow, next week or even next mont. For example, say you’re planning to visit Oracle Park in San Francisco and want to check it out before you go. You can use Immersive view to see where the parking lots and entrances are, and also see what the weather will be like so you can dress accordingly. You can also use the feature to glide down to street level to see how busy nearby restaurants will be on that given day. Immersive view is launching in Los Angeles, New York, San Francisco and Tokyo in the coming months on Android and iOS. Google says it will add more cities in the future. Immersive-View-entrances-and-parking-lots Google also announced that it’s launching over 250 photorealistic aerial views of global landmarks today, which it says marks a step toward its goal to offer a more immersive map. Today’s expansion comes as Google added 100 aerial views of global landmarks to Maps in June.

As for Neighborhood vibe, the new feature is designed to give users the ability to instantly see the vibe of any neighborhood through photos and information from the Google Maps community. Neighborhood vibe instantly shows you trendy places to highlight what’s interesting about a specific neighborhood. The new feature is launching globally in the coming months on Android and iOS. You can use the feature to see if a neighborhood has an artsy vibe or has an exciting food scene so you can decide how you want to spend your time there. Google says that the feature aims to help users decide what’s worth exploring by surfacing local gems right on the map.

Google also announced that it’s bringing search functionality to Live View, the feature that overlays arrows and directions right on top of your view of the world. The new Search with Live View feature lets you use your camera to find essential places like shops, ATMs and restaurants when you’re on the go. Say you’re in a place that you’re unfamiliar with and you want to find the nearest ATM, you can lift up your camera and search to instantly see the ATMs in the area. “You can just lift up your camera and see overlaid on the real world the ATM that’s nearby,” said Chris Phillips, the VP and GM of Geo at Google, during a briefing with reporters. “You can also see coffee shops, grocery stores and transit stations. You really get a sense of what an area is like at a glance. You can even see the business hours of a place that’s down the street. It’s an amazing way to bring it all together at once, it really simplifies the experience and gives you confidence when you’re trying to see what’s around you in that moment.” Search-with-Live-View Search with Live View will be rolling out in London, New York, Paris, San Francisco and Tokyo in the coming months on Android and iOS.

In addition, Google announced that developers will soon be given the option to enable Maps’ eco-friendly routing in their apps. Google Map’s eco-friendly routing lets drivers see and choose the most fuel-efficient route to their destinations. With this expansion, companies of all industries, such as delivery or ridesharing services, will have the option to enable eco-friendly routing in the apps and measure fuel consumption savings. Google notes that developers will also be able to select an engine type to get the most accurate fuel or energy efficiency estimates. Google says this is a way to help extend the reach of the sustainability efforts that eco-routing offers. The expansions for developers will be available in preview later this year in places where eco-friendly routing is available, which currently includes the United States, Canada and parts of Western Europe. Also for developers, Google will soon give developers access to “Advanced Markers,” which will allow them to customize the Google Maps red pin and create interactive markers within their maps. This feature will be available in preview in the coming weeks. Developers will also soon get access to a new Address Validation API that will help identify address components, fixes errors and augments addresses with missing data–which can help prevent canceled orders, customer support tickets and refunds. google-search-on-2022-banner-3 Here are all of the new features and updates coming to Google Maps by Aisha Malik originally published on TechCrunch