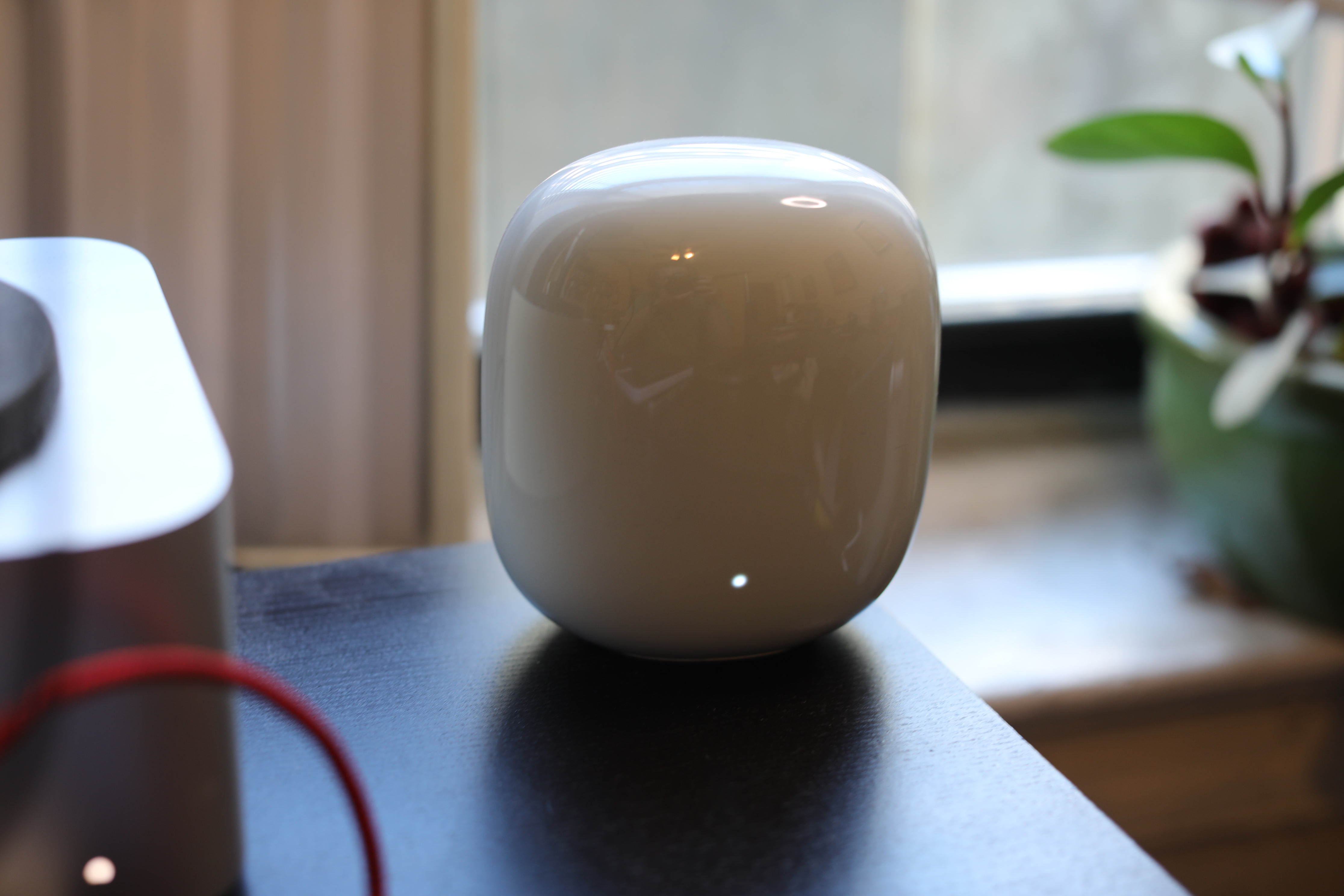 Even so, the Nest Wifi Pro is available now, so I’m committing some of my initial impressions to the page, after setting it up and using it for a few days. I hope this is helpful if you’ve been eyeing one since its unveiling earlier month. If you need something a bit more substantial than my doughy brain can offer up at the moment, I completely get it. We’ve got plenty of big reviews planned over the horizon. Let’s start with what the Nest Wifi Pro is an isn’t. It’s “Pro” in the sense of where it fits in the broader Google Wifi line. It’s a home router, one that looks nice and is easy to set up. There are faster and more powerful routers out there. There are routers that are more customizable and flexible. If, however, you’re looking for a router with Wi-Fi 6E that works right out of the box, it’s hard to beat. CMC_3963 That’s an important thing to note with products like this. At $199, this is a solid entry into Wi-Fi 6E territory. If you’re looking for a quick boost to your home internet, and the current dusty old router is starting to give up the ghost, you’d be hard-pressed to find a better “just works” system out of the box. I say this with the authority of someone who spent his own hours on the phone with terrible ISP customer support, because of some phantom ghost in the machine of the company routers. Amazing how often the fix is someone flipping a switch on their end. I was long overdue for a wireless upgrade myself, as someone who hosts a lot of podcasts and video livestreams. There are more embarrassing things that can happen to one on a live broadcast, but we won’t get into them here. Suffice it say that a strong and steady internet connection is an important part of doing my job. Another caveat I should mention before we go further is the one I often give while testing smart home-related tech: I live in New York City. That means, among other, better things, that I have a relatively small dwelling area. Specifically, I’m in a one-bedroom. Google clocks the Nest Wifi Pro’s coverage area as 2,200 square feet (4,400 for a two-pack, 6,600 for the three, etc.). One-bedrooms in NYC tend to range from around 600-800 square feet. CMC_3968 With that in mind, a single device was plenty. Speeds can fluctuate during the day, but I found mine to be fairly consistent, regardless of how close I was to the router. If you’re on the fence about whether a single device is enough, it should be more than enough for anything below 1,000 square feet. As you push closer to 2,000 square feet, the bundle starts to make more sense. And the upshot to the UX is that it’s easy to add Google mesh routers down the road (though you won’t get those bundle savings). The setup process will prove familiar if you’ve ever set up most smart home products — Google/Nest stuff in particular, for obvious reasons. There’s not much to the device from the user’s perspective (again, this is intentional). The design is arguably even more minimal than its predecessor. It’s taller and slimmer, the matte color replaced with a shiny, plain job. Your mileage on that last bit will vary, but as with other Nest products, this one is designed — above all — to blend in with its surroundings. There are three ports: power and a pair of Ethernet — one for the modem, the other to hardwire a single device. That last bit is a potential limiter, of course, as is the 1Gbps upper limit on the built-in Ethernet (to help keep the system under $200, one imagines). That may or may not be an issue, depending on your specific plan. If you have fiber, for example, you’re going to get bottlenecked. Me, I’m stuck with Spectrum at the moment (I know, I know), so, um, no issue there. But obviously you don’t want a device that sits between you and the wall slowing down your internet speeds. Either way, the service you’re on will determine your ultimate speeds. CMC_3986 Download the Google Home app to get started, and you’ll be walked through a straightforward setup process, sped up if you can snap a shot of the QR code on the product’s underside. The paper startup guide included in the box is three basic steps (plug in router, download app, follow on-screen instructions) and two images spread across two small pages. I’m not going to say that’s definitely all you need, but if you don’t run into any hiccups (always a consideration with networking devices), it should be plenty. Nest Wifi was a fine system, and honestly, if you bought one, you likely don’t need to rush out and upgrade. Its combined speed for Wi-Fi 5 topped out at a stated speed of 2.2Gbps versus the Wifi Pro’s 5.4Gbps. Keep in mind, those are both figured combined across the three bands. Let’s just say they are very optimistic figures. Here’s Wi-Fi Alliance CEO Edgar Figueroa from 2020 about the upgrade from Wi-Fi 5:

CMC_3961 Another important note here: The Pro is not backward compatible with the standard Nest Wifi. That means you can’t mix and match. That’s a shame, because you can find some really good deals on those old, standard Nest Wifi devices right now. The other small bit to note here is that, unlike their predecessor, there’s no built-in smart speaker here. But as I type this, you can currently buy a Nest Mini directly from Google for $20, so have at it. Google’s Nest devices bring some other nice elements to the table, like devoted networks for guests, parent controls and over the air security updates. For a quick and easy way to get your home Wi-Fi network up and running at high speed (including access to the 6GHz band), coupled with some family-friendly features, this is a tough package to beat. The Pro runs $200 for one, $300 for two and $400 for three. Google’s Nest Wifi Pro is a dead simple way to bring Wi-Fi 6E home by Brian Heater originally published on TechCrunch