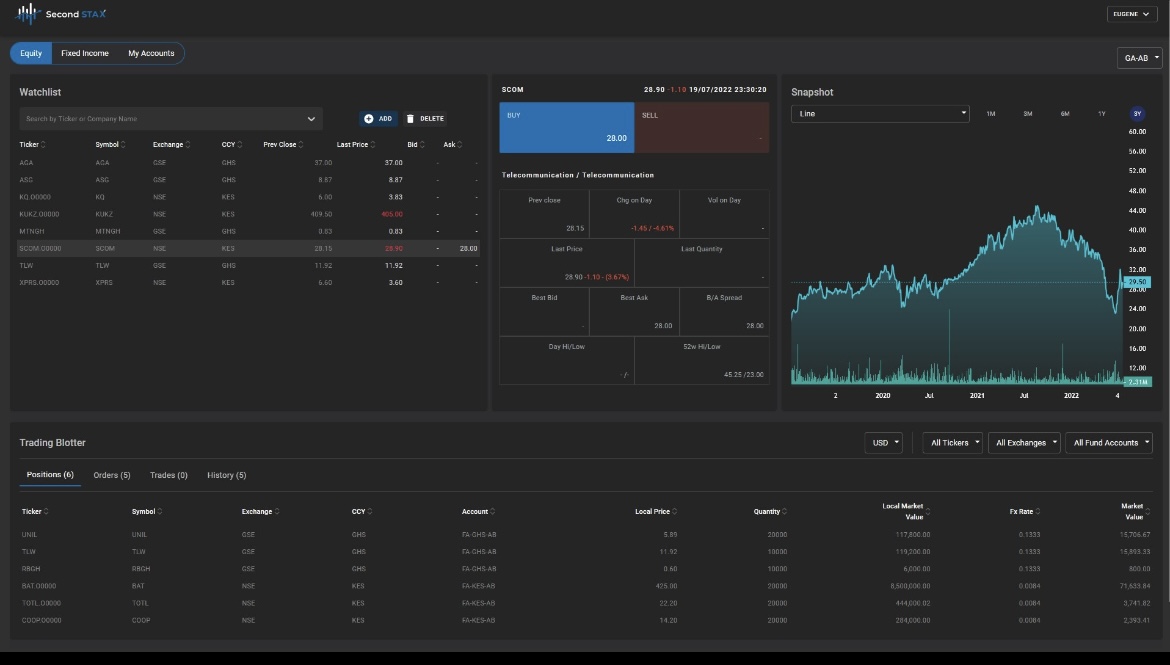 Not only does this limit investors’ access to high-growth securities, but it also limits access to capital that has grown in leaps and bounds over the past couple of years. Per reports, major regional exchanges in Africa have raised over $80 billion in equity capital markets and $240 billion in debt capital markets. While local retail apps such as Bamboo and Chaka offer U.S. and foreign stocks to individual consumers, they are as constrained as traditional brokers when it comes to helping consumers buy stocks and bonds across different capital markets within Africa. However, there’s a startup taking a peek at the challenge and aiming to tackle it with its cross-border, multi-asset order routing and market data portal: Ghanaian fintech SecondSTAX (Secondary Securities Trading and Aggregation eXchange). The platform, which will allow broker-dealers, asset managers, pension funds, and institutional investors to access markets outside their own country, is announcing its launch to the public today. To bolster its efforts, it has also raised $1.6 million in pre-seed funding from private investors and venture capital firms, including LoftyInc Capital and STEMeIn. SecondSTAX co-founder and chief executive officer Eugene Tawiah brings immense experience to run such an ambitious project. In addition to spending more than a decade at Goldman Sachs, he ran various consulting and tech jobs for firms in financial services and capital markets. In 2018, a landmark event tilted his journey into building SecondSTAX. That was the year MTN Ghana, a local telecom operator, went public in the West African country after raising about $237 million. “I was having conversations with heads of trading desks and there was a sense that during MTN’s IPO, that even though one had a bunch of cash to invest, if you were not in Accra, there was no way to access or buy into that IPO,” Tawiah told TechCrunch on a call. “And so the concept I had in mind was, if I stayed in Lagos, Nairobi, or some other place outside of Accra, how do I get access to these offerings and be able to trade them?” Tawiah co-founded the company with Duke Lartey. SecondSTAX provides access to debt and equity securities across multiple African bonds and stock exchanges. Similarly, the B2B capital markets infrastructure platform says it will assist investment firms outside Africa that want to invest in emerging and frontier economies on the continent. Investment firms onboarded on its platform can also hold assets in various currencies, thereby reducing single currency risk and reducing the volatility in their returns, whether in Africa or elsewhere, the fintech said. Breaking down how SecondSTAX works, Tawiah says to think of his company’s platform as a layer in a series of concentric circles. The first and second circles consist of institutional investors from developed markets and those in Africa, respectively, who are interested in investing in various stocks and bonds available on African exchanges. SecondSTAX is the third circle and acts as a gateway to the fourth circle, the exchanges. “You have exchanges where the securities are traded in each country. Nigeria is a silo, same with Ghana, Kenya and South Africa etc. SecondSTAX is effectively the aggregation of these exchanges across the continent. It’s that one platform that links all of them together. And then now as an institutional investor like Goldman Sachs in New York, Bank of America in the U.K., or a boutique firm out in Singapore, they have access to this platform to touch each of these exchanges.” Missing Attachment According to the chief executive, once the fintech’s infrastructure is up and running, it will consider extending its capabilities to support B2C investment management apps. Retail investors within and outside Africa will then be able to access and trade cross-border stocks and bonds via white-labeled apps launched by brick-and-mortar brokers and powered by SecondSTAX or third-party wealth tech apps such as Bamboo, HashApp, Robinhood and Hisa. “We are not distinguishing between brokers; they can be brick and mortar or startups. Our potential client base is much broader than one type of institution; so long as the broker has a digital play, they can use our infrastructure to access African exchanges.” The fintech, launched in 2020, is eyeing capital markets in Ghana, Kenya, Nigeria, South Africa, Morocco and Egypt. However, at launch, it will launch in the first two, enabling routing of market orders for all stocks across Ghanaian and Kenyan exchanges and allowing cross-border transactions within both capital markets through its sponsoring broker partnerships. Tawiah says the funding will see SecondSTAX launch in additional countries by the end of the year and perform the activities that come with that, especially regarding regulatory and licensing issues. There are also plans to increase its staff size and strengthen its tech by developing more features that its clients demand. “We expect that in the next 18 to 24 months, the revenue coming from these clients starts to become incrementally impactful in terms of being able to shift us from startup mode to an actual running concept generating meaningful revenue,” added the chief executive. Ghanaian fintech SecondSTAX allows investors to access capital markets outside their countries, raises $1.6M by Tage Kene-Okafor originally published on TechCrunch