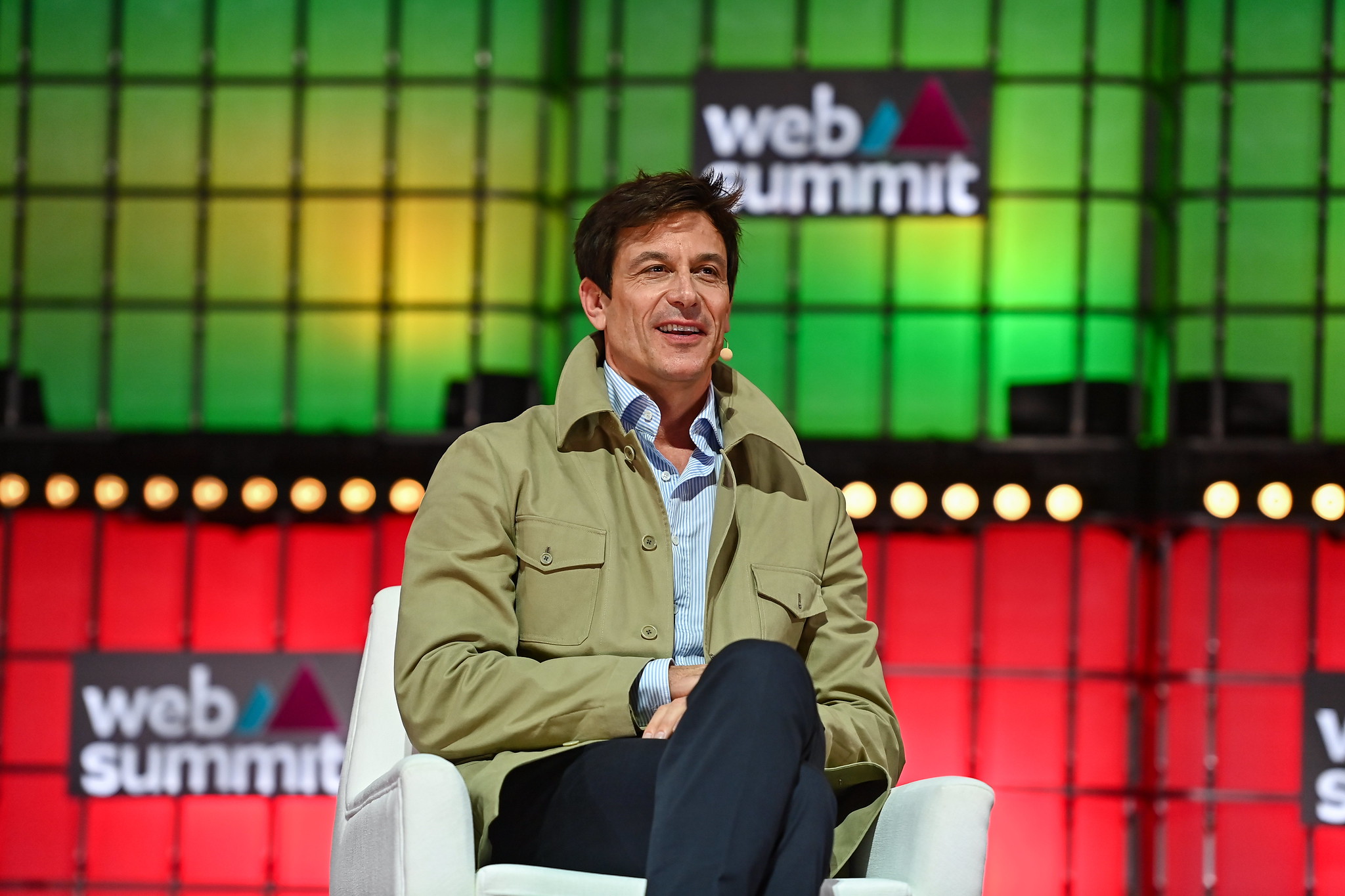 The two were speaking at the Web Summit conference in Lisbon, and Wolff was cheered when he appeared before the crowd, owing in no small part to “Drive to Survive,” the Netflix series that has made him famous. (He told the New Yorker he enjoyed this, recounting to writer Sam Knight how a young woman threw herself through the open window of his car to get her picture taken.) Wolff also immediately acknowledged the obvious. “We won the championship eight times in a row,” he said, “but that is the past.” Mercedes, he continued, “just got the physics wrong . . . and got the concept of the car not in the right place,” he said, referring to the design of its floor, which he has previously pointed to as the root of the team’s surprisingly lackluster year. (Every few years, Mercedes and the other F1 teams — there are currently 10 altogether — are forced by the body overseeing Grand Prix racing to redesign their cars.) Indeed, it’s largely because it “takes a a long time to unwind things that are built into the car,” said Wolff, that his team last year turned to TeamViewer, a 17-year-old, publicly traded company whose software can remotely access and connect any computer, tablet, laptop, mobile device, and IoT endpoint like an industrial machine — or race car — to allow the remote control, management, and monitoring of these devices. It’s a match made in heaven, suggested Steil, who said that TeamView is working closely with the Mercedes-AMG Petronas team to make it more efficient, including running lab tests out of hours and supporting the trackside crew via remote engineers. “We really try to go through a system, like we have at Formula 1, like a team. We see the different parts, and we see what can we do differently if we connect in real time, in addition to what we do maybe on trackside and in the back office. We’re really working through the different parts of the organization, on testing obviously, production maintenance, wind tunnel, all these kinds of applications where we try to see where can be better . . .” Wolff chimed in separately to paint the bigger picture. “We are racing 23 times around the world, around the globe [during the racing season], and our core team is just 90 engineers [with] 2,000 back at the factory with 2000,” including 1,000 people focused on the chassis side and another 1,000 focused on the engine. “Operating in the field, or we call it surgery in the field, is not always trivial because if you open up an engine or a complicated cooling system, you want to have the resource from back at home, and TeamViewer is the only technology that allows us today in having the guy back at home look through the same borescope into the cylinder head, then [help] the mechanic on the field.” As an added and not inconsequential benefit, said both men, the partnership cuts down on emissions because it means moving fewer people around at a time when Mercedes is focusing increasingly on sustainability. In fact, Wolff said, the team has cut its emissions by nearly 90% in recent years. “It is our responsibility to show our global audience of billions of spectators that if we can do it, everyone can do it,” he said. Certainly, the appearance was a great moment for TeamViewer, whose other clients range from telecommunications companies to the fast-food franchise Wendy’s. There’s nothing like having the best team boss in the recent history of Formula 1 sing your praises. Of course, what racing fans want to know is: will its tech give Mercedes — which has yet to win a race in 2022 — enough of an edge to overcome the team’s arch-rivals, Red Bull and Ferrari? While Wolff is looking to “tomorrow,” as he said yesterday, it could take a while, even with the faster feedback loops that TeamViewer’s technology provides the team. As he recently told the outlet RacingNews365, Mercedes is still “eight to 10 months” behind Red Bull in terms of Formula 1 development after its frustrating 2022 season. “There is definitely a challenge,” he added, “but we are playing the long game, all of us.” Formula 1’s Toto Wolff looks for fresh edge in 2023 through remote software by Connie Loizos originally published on TechCrunch