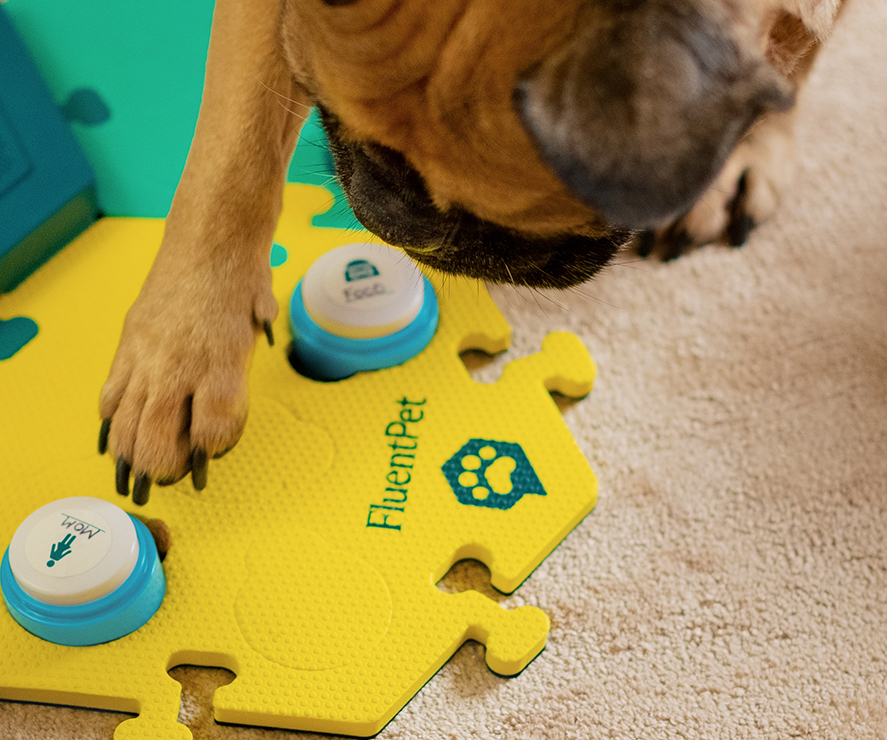 On TikTok alone, Bunny has 8.2 million followers on the @whataboutbunny account. At the Consumer Electronics Show in Las Vegas, FluentPet was demonstrating its new communication system for pets, the FluentPet Connect. Missing Attachment Like the first version, the new system involves programmable buttons that, when pressed, speak voice commands. The dog can press the buttons with its paw or nose, while hexagonal, multicolored tiles — which the company called “HexTiles” — hold the buttons in place and offer visual cues for the dogs as to the button’s location. The system can be expanded by snapping together more tiles as the dog’s vocabulary grows. To use FluentPet, dog owners will record their voice speaking command words, like “water,” “outside,” “ball,” “play,” and others they want to teach their pet to know and understand. Dogs already know words, of course — as any pet owner will tell you — but what makes this system interesting is that the dog can press a button to communicate what it wants. The sound itself emits from a base station with a speaker attached. Missing Attachment Some dogs are smarter than others, and not all dogs will be able to achieve Bunny’s level of success with such a system, of course. However, the company says that over 70% of dogs using the system will get two buttons within a month — a “play” button and an “outside” button, typically. Then the dog owner may then add on an “All Done” button to signal that a play session has ended. On average, dogs learn up to 9 words with the buttons, the company has found. Still, the findings from the sales of the original FluentPet system have been eye-opening. Since starting shipping its first-gen product in June 2020, the company has reached over 100,000 households. It surprisingly found that dogs weren’t just able to learn individual words, but were also putting together word combinations to communicate — like “water” plus “bone” to indicate they wanted an ice cube. “Because we’ve got all of these people that are kind of co-creating this new product category with us, they’re able to communicate to us interesting new things — new button combinations that their dogs seem to use. So this is why we think of it as ‘translation,” explains FluentPet CEO FluentPet CEO Leo Trottier. Trottier’s background is in cognitive science and A.I., he says — noting he left the Ph.D. program at UC San Diego after doing his undergrad at the University of Toronto in order to build the company that became FluentPet. Originally called CleverPet, the goal had been to build something more in the dog games space. (The other original co-founders have since left). The data (with users’ permission) is being shared with the Comparative Cognition Lab, and soon, with John Hopkins. Missing Attachment FluentPet’s other co-founder Alexis Devine, is Bunny’s owner — so it turns out, Bunny’s social media across Instagram and TikTok was actually a savvy marketing campaign for FluentPet’s systems. Work on the updated model began in 2021. This version now introduces Wi-Fi connectivity and a connected mobile app. That means when the sound buttons are pressed by the dog, their message is also sent to the app. If you’re in a different part of the house and can’t hear the sound, the app will alert you. “There’s app notifications — you can get a ‘text’ message from your dog,” said Trottier. (It’s not really being delivered over SMS, to be clear — it’s from the app.) The FluentPet Connect system is accepting pre-orders now. The starter pack — aka FluentPet’s “Get Started” Kit — comes with 6 connected buttons, 3 HexTiles and the battery-powered base station with a higher-quality speaker for $159. Original system owners can swap out their old buttons and base station for the new ones, but continue using their own tiles. The pre-Series A company has raised funding from Republic.com and angel investors; 3 million+ was raised as CleverPet while another 750K came after the pivot. FluentPet’s talking button system lets you get a “text” from your dog by Sarah Perez originally published on TechCrunch