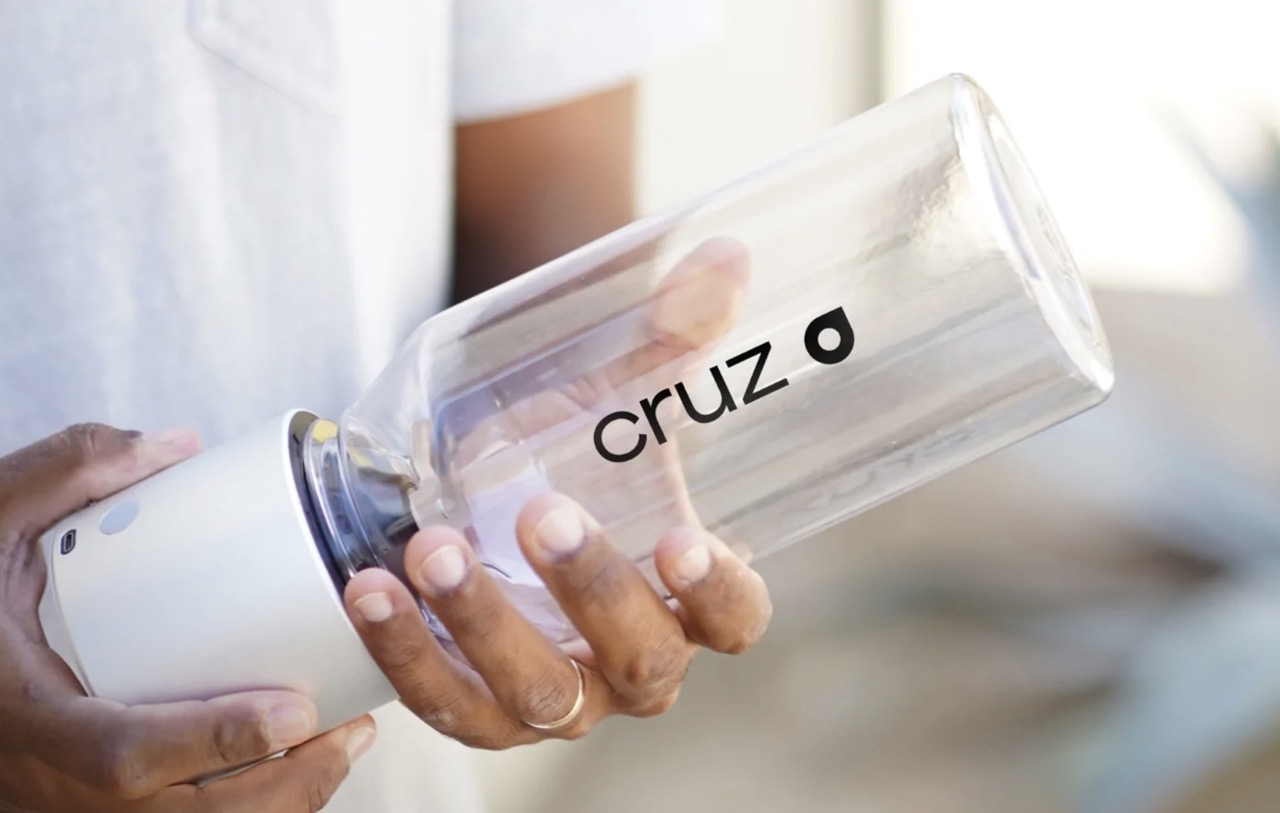 Let’s start with, er, why do we need a portable blender in the first place? “We originally invented this just for personal use for making smoothies after the gym. I was going to CrossFit, and I wanted a protein shake after that. I made myself a shake, and it just got sort of melted and lumpy after you have worked out for an hour or two,” says Dakota Adams, co-founder at the company. “Then the idea came along to put a blender onto these Hydroflask-style bottles. Matthew [Moore] and I became friends and began working on how to pack that technology into a tiny little cap.” At the time, the duo was building a battery factory for Apple in China, working on the blender on the side. About a year ago, the duo quit their jobs at Apple to make the BlenderCap a reality. In the process, they created an absolute beast of a blender. 20230105-IMG_2498 “We discovered you can make margaritas smoothies. In testing, we’ve done an entire Costco bag of ice on a single charge. You can make 10 of them in a row,” laughs Adams. “We filled an entire five-gallon Home Depot bucket of margaritas. What that translates to in real life, is that instead of charging it every day, you charge it once a week or every two weeks.” Battery tech is the company’s strength, and the founders ended up using custom batteries with technology that is starting to show up in next-generation electric vehicles. The blender cap weighs around a pound, and it’s super simple: There’s only one button. Press and hold to blend, or double-click to blend for 25 seconds. It charges with USB-C, and the company decided to use the same thread pattern that Hydroflask uses, which means it is compatible with a large number of thermos-like bottles that a lot of people already own. “We sell it as a kit – it comes with a 32-ounce vacuum-insulated bottle that’s dual wall stainless steel, and dishwasher safe. It comes with a BlenderCap, a blade cover, and dual-twist cap, which transforms the wide-mouth bottle into a smoothie-mouth,” says Matthew Moore, the company’s other co-founder. “It charges over USB-C, and you can buy it for $129” It isn’t yet possible to buy the blender cap on its own; the company says it’s because it’s trying to keep the number of products it sells manageable. 20230105-IMG_2496 “In the future, we are probably going to offer it on its own, or with different size bottles etc, using more of a kitting methodology. Right now, just to limit the SKU count and make it simple for launch, we are just selling the one kit,” Moore explains. “We found that a single 32-ounce bottle is what most people wanted it in early testing.” Pre-orders for the kit opened on January 4, and shipping starts late next month. The company says its products are already manufactured; it just have to figure out the logistics of getting it here.

Perhaps unusually, Cruz has its own factory building the BlenderCap. “We’re leasing factory space at a really high-end manufacturer in Shanghai, and we own all the equipment and the robots building this. So we actually have on our assembly line – we designed the entire assembly line – and we’ve got more robots than people putting this together,” says Adams. “It’s crazy. There are glue dispensing robots, automatic screw dispensers. It’s beautiful. Frankly, that was a bit aspirational. And we’re really happy to have our own dedicated factory building.” For its first batch, the company is manufacturing 6,000 of the BlenderCaps, and is ramping up to sustaining manufacturing. 20230105-IMG_2495 The company claims it is going to be profitable from day one, and has started to look at what the next generation of products might be. We asked, but the company isn’t quite willing to share what’s next. “We’ve got a secret product coming up,” laughs Adams. “Obviously, this battery tech can go into many different devices, and we have a whole product roadmap, and are excited to build out an ecosystem around what we have here, and then other new consumer products. One of the things that we’ve observed in the market, is all these DTC brands over the last 10 years came in basically just rebranding cheap Chinese commodity products, a lot of plastic enclosures and just junk. We have this design philosophy that we grew up on at Apple for 10 years of really putting our heart and soul into products. So we’ve got a whole bunch of products coming along the same philosophy: minimalist, super high end materials. From there, we’ll see where it goes” ces-2023-banner-72 Ex-Apple team creates BlenderCap, a delightfully over-engineered portable blender by Haje Jan Kamps originally published on TechCrunch