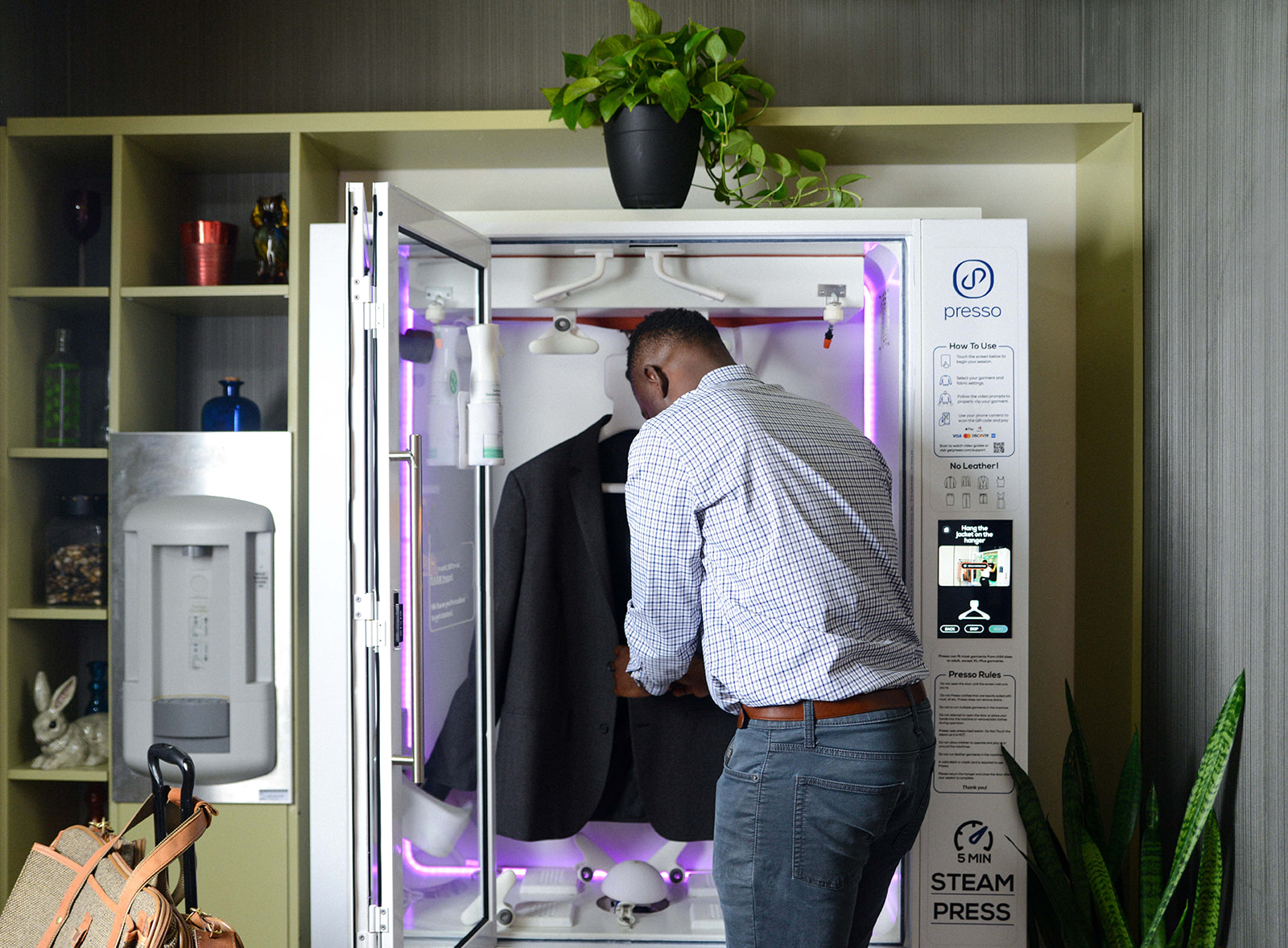 Around that time, the film industry was looking for a quick, safe and efficient way to clean wardrobes at the height of the pandemic, and as it happens, Presso’s hometown of Atlanta is among the top two or three filming locations in the U.S. Ultimately, however, that partnership would prove short-lived. “What we found out a few months into it was most of these productions only shoot for a few months out of the year,” co-founder and CEO Nishant Jain said on a call with TechCrunch. “So, every few months, we have to do reverse logistics, which, for an early-stage company, economically, just doesn’t make sense.” It was a good temporary partnership and a proving ground for Presso’s robotic dry-cleaning kiosk. Amid widespread reopenings, however, Presso is returning to its initial client base of hospitality/hotel companies and real estate firms. The startup’s newfound focus is being propelled by an $8 million Series A raise from a slew of high-profile backers, including Uncork Capital, 1517 Fund, AME Cloud Ventures, HAX, SOSV, Pathbreaker Ventures, VSC Ventures and YETI Capital. The round brings Presso’s total to-date funding up to $10.1 million. It’s a lot for what is still an extremely small company with a headcount of 14. Certainly no one can blame the company for a conservative approach to growth over the past three years. The new funding will be used, in part, to grow the team, bringing its number up to around 20-25 people within the next year. It will also go toward scaling its product and meeting its 80+ bookings. Presso is using a hardware-as-a-service model to effectively lease its offering to clients. The businesses both set pricing to have an article of clothing dry-cleaned and take a revenue share out of the bottom line. The latter is adjustable, based on the amount they pay up front. In additional to developing its own hardware and leasing its machines, Presso is creating other key pieces of the puzzle, including a newer, greener fluid for the dry-cleaning process. “We had chemical engineers to develop our own liquids,” says Jain. “They’re far more organic; 70% of the industry still uses industrial solvents. We invented something that is orders of magnitudes better than we’ve ever seen.” In the future, it could potentially license the liquid to third parties. For now, however, Presso is focused on building — and distributing — its dry-cleaning kiosks. Dry-cleaning robotics startup Presso pulls in another $8M by Brian Heater originally published on TechCrunch