Can an $8 Twitter subscription bail out Elon Musk? Let’s look at the numbers. 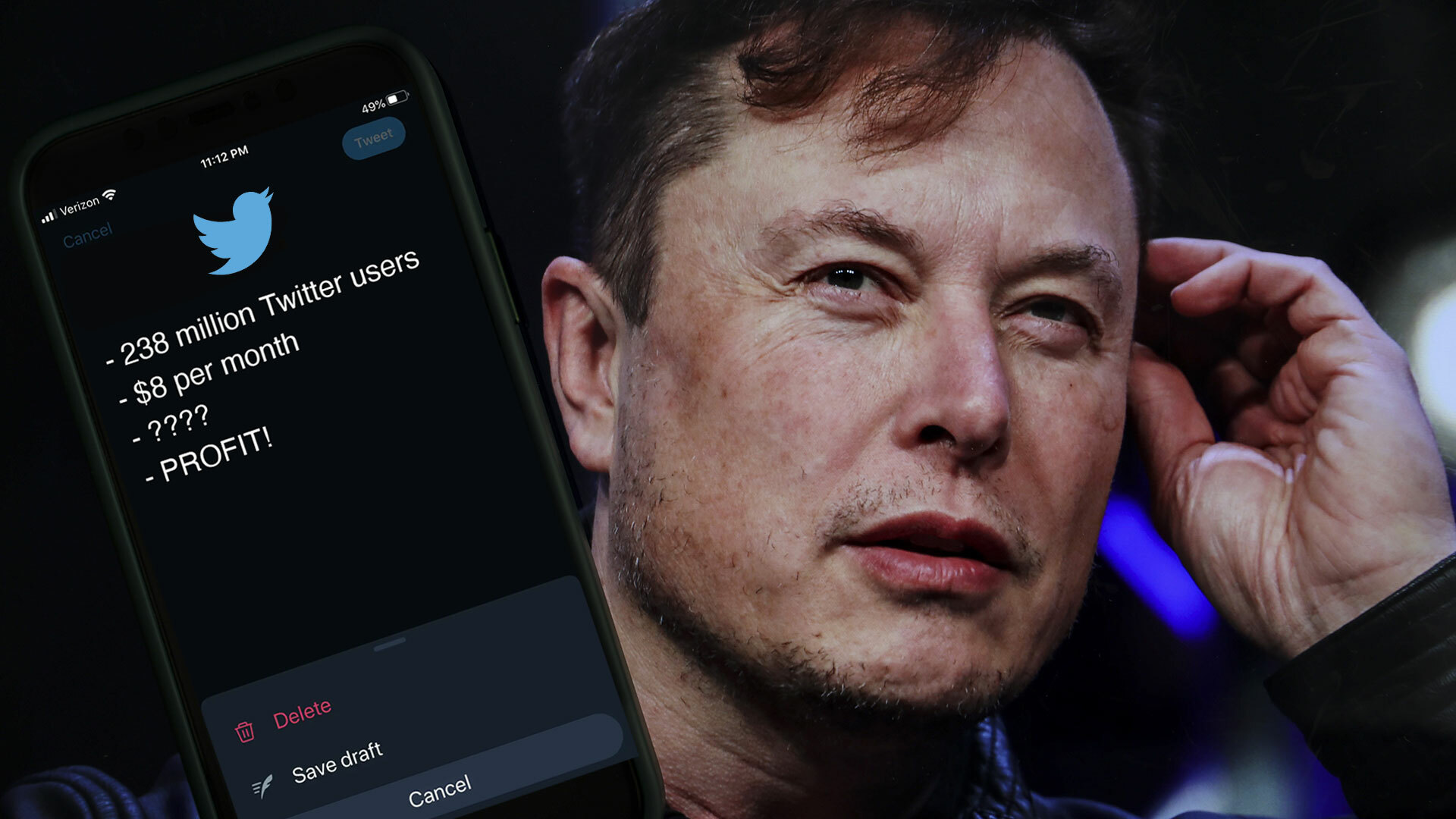 Elon Musk needs to make money…and fast. And he’s eyeing Twitter users’ wallets to do it.Musk recently paid $44 billion for Twitter, a company that has turned a profit only twice in the past 10 years, and now he has billions in debt plus creditors and investors to please. What’s more, advertisers are fleeing the platform due to his leadership and a resulting rise in toxicity. So, what’s the new Twitter CEO to do to bring back the bucks? Charge users a monthly fee for verification status. You may have heard the spin: “He’s doing it to level the playing field with the masses and the elite blue checks!” But that’s just not based in reality. The truth is Musk is hoping that an $8 per month subscription will make up for lost ad revenue. Except it won’t. And we have the numbers to prove it.

If Musk really thinks Twitter users will pay for an $8 monthly subscription in droves, thereby solving all his cash flow problems, he’s in for a rude awakening. There’s a reason why Netflix, arguably one of the most successful subscription services with its 223 million global subscribers, is even moving to an ad model.Elon Musk’s supporters have twisted themselves into knots to try and make the numbers for this proposed subscription service make sense. For example, one verified account with over a million followers estimated that Musk stands to make $1.9 billion per month once Twitter’s 238 million daily active users sign up for the service. That’s a 100 percent conversion rate…with absolutely zero churn. It’s just not realistic. Tweet may have been deleted (opens in a new tab) Bloomberg Markets anchor Jon Erlichman gave a seemingly more grounded take when he estimated that Musk would only need a third of those users, or 78 million of them, in order for subscriptions to make up for Twitter’s advertising revenue losses. Tweet may have been deleted (opens in a new tab) This estimate is generously optimistic, to say the least. For context, 78 million subscribers is nearly double the number of U.S. customers that the streaming service Disney+ has. It’s a best-case-but-still-incredibly-unlikely scenario, especially when you consider that the average conversion rate for e-commerce is well below five percent. In fact, a good conversion rate, meaning the percentage of people who see your ad and then buy your product or service, is around two to three percent. To give a similar real-world example, let’s look at YouTube. The video platform has over 2 billion monthly logged-in users. A YouTube spokesperson tells me that its paid subscription service, YouTube Premium, has 50 million subscribers, including trial users. That amounts to a 2.5 percent conversion rate. Of course, when you’re dealing with subscriptions, you need to also factor in churn rate, or the percentage of people canceling their monthly payments.So even with our expectations adjusted, it’s still a stretch to assume that between two to five percent of Twitter’s 238 million daily active users would sign up for Musk’s retooled subscription service.

Twitter already has a subscription product that’s $5 — three bucks cheaper than Musk’s proposed plan. And it’s already called Twitter Blue as well, the name Musk is sticking with for his own $8 service. The current $5 version provides users with the much-requested “edit tweet” feature, an ad-free news reader, an expanded bookmark feature, and some menu customization options. And it hasn’t been doing very well.According to data from mobile analytics firm Sensor Tower, Twitter’s app has only generated $7 million in in-app purchase revenue since 2014. The majority of that revenue comes from Twitter Blue, which was launched in June 2021. That number also includes revenue from Twitter’s other in-app purchase products, like Twitter Spaces tickets, but Twitter Blue makes up the bulk of those purchases. Sensor Tower only tracks purchases from Twitter’s mobile app, but being that more than 80 percent of Twitter’s users access the platform on their mobile device, the firm’s figure is a pretty good indicator. Just to be fair, if $7 million was generated from the 80 percent of Twitter’s mobile users, then let’s throw in an additional 20 percent for that slice of desktop users for a total of $8.4 million from Twitter Blue.$8.4 million over sixteen months is roughly $525,000 per month or 105,000 users paying $5. And that’s without factoring in Apple and Google’s 30 percent cut from purchases on their respective app stores as well. Casey Newton of The Platformer newsletter corroborated this estimate in a recently published piece, saying Twitter Blue has “a little more than 100,000 active subscribers.”Clearly, Musk’s ambitions for a paying Twitter user base are idealistic at best. So to sweeten the lure, he’s including a verification badge as a perk of Twitter Blue. The thinking goes that since everyone wants the blue checkmark, more people will pay for the service. But there’s a problem with that logic. For one, the allure of the verification badge is that it’s exclusive. If anyone could just buy it, then it stands to reason most people wouldn’t want it anymore. That point aside, let’s take a look at who the real customer base is for Twitter’s subscription products and why the previous iteration didn’t take off (and why Musk’s plan won’t either).

If you look at what Musk is offering, you’ll quickly see that Twitter Blue is meant for the content creators on Twitter. This is different from streaming service subscriptions like Netflix or HBOMax, or even YouTube’s ad-free Premium subscription; services which are geared towards content viewers. Those subscriptions, with their massive catalogs of content, provide an entertainment service that appeals to the masses. However, Twitter just doesn’t carry that same appeal nor offer that same breadth of content. Someone who rarely posts on Twitter and just scrolls through the feed of the people they follow isn’t going to care about a verification badge or having their replies prioritized. They don’t post! And, to be clear, the vast majority of people on Twitter barely ever post.According to internal research from Twitter, 90 percent of all tweets are created by less than 10 percent of its monthly overall users. The study called these users “heavy tweeters” and defined them as “someone who logs in to Twitter six or seven days a week and tweets about three to four times a week.” Read that again. Twitter’s power users, who make up nearly all the content, don’t even post daily.But let’s say that the less than 10 percent, or roughly 23.8 million people who post somewhat regularly, are the user base that Musk wants to convert into paying Twitter Blue subscribers. Based off that average 2.5 percent conversion rate, we’re looking at 595,000 Twitter Blue subscribers. For Musk to be able to take care of his yearly debts, however, Forbes estimates that 10.4 million users would need to sign up at $8 per month.At $8 per month with zero subscription cancellations and a subscriber base of 595,000 “power users,” Musk is looking at $4.76 million per month in revenue or around $57 million per year. To compare, earlier this year Twitter shared that it had made $4.5 billion in advertising revenue in 2021 and an additional $571 million in data licensing. If Musk’s changes drive users away, he’ll be taking a hit in those two areas in exchange for a subscription product that would generate nothing even close to that type of revenue.The closest social media subscription product that can be compared to Twitter Blue is probably Snapchat’s new premium service, Snapchat Plus. Launched on June 29, it’s already blown away Twitter Blue’s numbers, pulling in approximately $29.3 million in just four months according to Sensor Tower. Snapchat Plus does sell a yearly subscription, so it’s a bit harder to pin down, but broken into monthly payments of $3.99, we’re looking at around 1.8 million Snapchat Plus users per month. Regardless, even looking at whatever the potential is here, things still look bad for Twitter by comparison. Last month, Snapchat announced it has 363 million daily active users. That’s 125 million more daily active users than what Twitter currently has.