Building up and tearing down 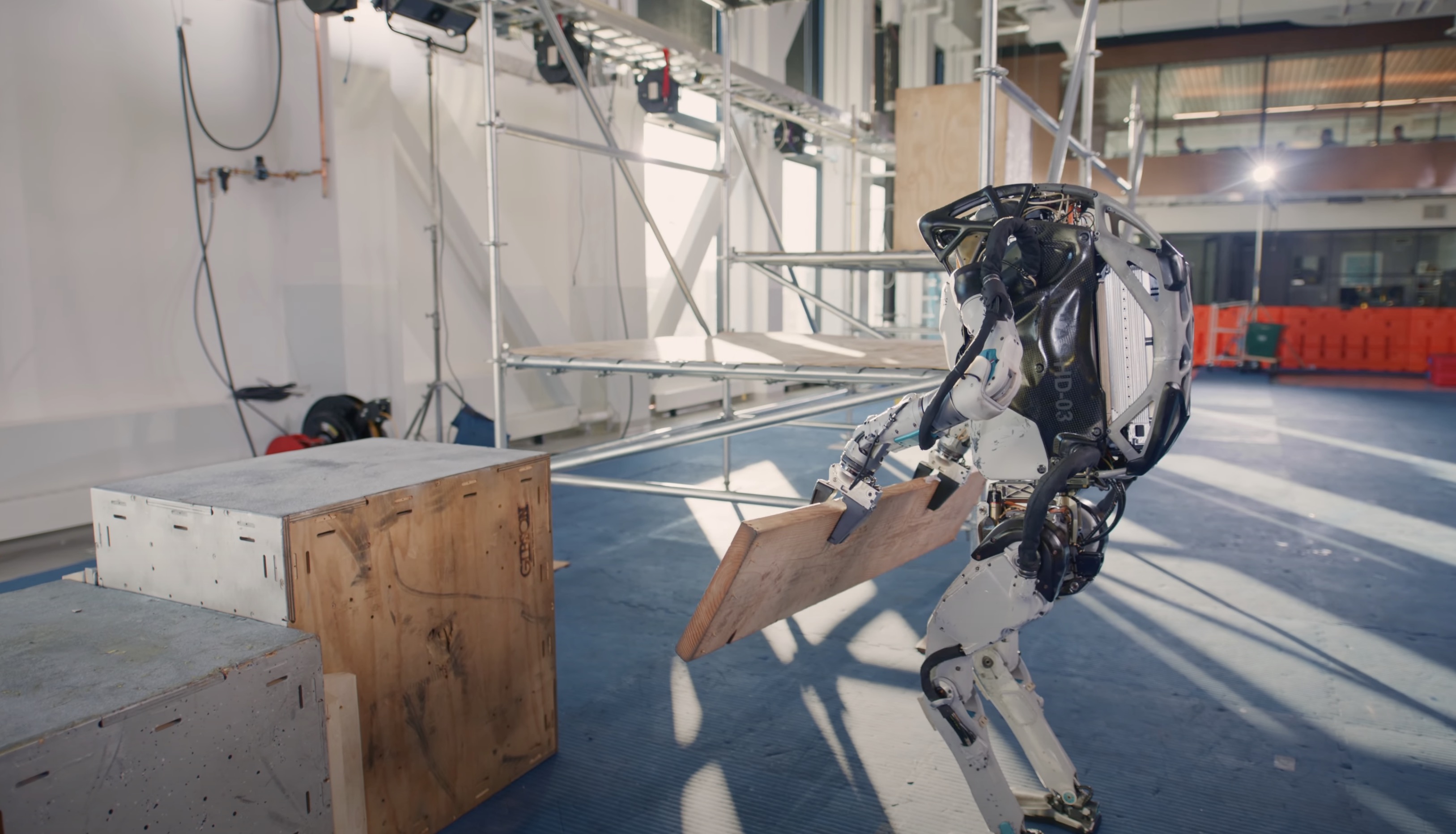 It’s not all good news, of course. The calendar reset a couple weeks back — but unfortunately, all of the economic doom and gloom doesn’t get a fresh start with it. This year is going to be a reckoning. As ominous as it sounds, this is not a wholly good or bad thing, mind. It’s more that, after two years of relentless optimism for robotics and automation, the check is coming due for many. This will be a year of sink or swim for many. As VC becomes harder to come by, runways suddenly shorten, and to sufficiently stretch the metaphor, no one wants to deal with a shrinking runway at takeoff. If you can’t rope in that $20 million round you were banking on, suddenly you’re faced with some extremely hard decisions. That could take the form of a pivot, a severe belt tightening (layoffs, thinning out the roadmap), exploring a sell-off or other worst-case scenario. All of the above options involve an existential change for everyone involved. Again, it doesn’t necessarily have to be a bad thing. Some well-positioned firms will come out of it better, as a clear front runner in the category. It could mean acquiring a smaller firm, combining teams and coming out stronger for it. Heck, even those who have had to take the extremely unfortunate (and life-altering) action of layoffs could ultimately come out the other side with a kind of renewed sense of focus. unnamed-1 All of this is top of mind, in part, because of the recent Intrinsic news, which just missed the deadline for last week’s newsletter. It’s a weird one. I’m hoping to catch up with the Alphabet team soon to discuss a series of events that included a couple of acquisitions followed by a 20% staff reduction, amounting to around 40 people. Certainly I’m aware that the timeline for acquisitions and personnel decisions don’t always line up in an ideal fashion. I’m always keenly aware of how big companies like Alphabet make these sorts of decisions for their bottom line. The fact is that it can be a lot harder to justify long-tail commitments — particularly those that aren’t deemed essential to the company’s core mission. None of this should be taken as a repudiation of Intrinsic’s mission, of course — the work it and other companies are doing in the robotics software space is key to the future of industrial implementation. If I had to venture a guess (as I am contractually obligated to do), I would say that it’s more a reprioritization on Alphabet’s part. An Intrinsic spokesperson told TechCrunch:

Intrinsic’s leadership has made the difficult decision to let go a number of our team members. We have communicated the news directly with them. We fully acknowledge how hard this will be and are offering as much proactive support as possible. This decision was made in light of shifts in prioritization and our longer-term strategic direction. It will ensure Intrinsic can continue to allocate resources to our highest priority initiatives, such as building our software and AI platform, integrating the recent strategic acquisitions of Vicarious and OSRC (commercial arm Open Robotics), and working with key industry partners. While incredibly tough to do, we believe this decision is necessary for us to continue our mission.

No question in my mind this was a difficult decision. Among other things, it’s not the sort of vote of confidence a young company is hoping for out the gate. But Intrinsic has a lot of smart folks on board — even more so after those acquisitions — and in spite of the downsizing, Alphabet does, of course, have tremendous resources if and when it turns that faucet back on. apple-wwdc-2022-2023-01-18-at-10.08.32-AM-1 The other bit of news I wanted to touch on off the top was yesterday’s Boston Dynamics news. One thing’s for sure — the Massachusetts firm makes a mean video. A few dropped this week showcasing new grippers for Atlas. The humanoid robot utilizes its new appendages to lend a couple of hands at a makeshift construction site. Here’s a breakdown from BD: Atlas’ ability to pick up and move objects of different sizes, materials, and weights (the wooden plank and tool bag) while staying balanced is enabled by improved locomotion and sensing capabilities. For this video the team installed utility “claw” grippers with one fixed finger and one moving finger. These simple grippers are designed for heavy lifting tasks and first appeared in the Samuel Adams [Super Bowl] commercial where Atlas held a keg over its head. Improved control systems in order to 180-degree jump while holding the wooden plank. Performing a spinning jump while throwing the tool bag. To accomplish this task the team extended the model predictive controller (MPC) to consider the coupled motion of both the robot and object together. Pushing the wooden box from the platform, which meant Atlas needed to generate enough power to cause the box to fall without sending itself off of the platform. Atlas’ concluding move, an inverted 540-degree, multi-axis flip, adds a symmetry to the robot’s movement making it a much more difficult skill than previously performed parkour. I would caution that nothing Boston Dynamics shows should be read as anything more than proof of concept. That’s doubly the case with Atlas, which is a research robot, through and through. The caveat here, of course, is that new(ish) owner, Hyundai, has been very aggressive about commercializing these products. Imagining some more productized Atlas offspring helping out around their automotive factories doesn’t seem far out of the realm of possibility, for example. Atlas certainly has a sizable head start on Tesla’s promised (threatened?) all-purpose humanoid. It remains to be seen what Figure is working on as well. Most of all, I look forward to a renewed, spirited debate around making robots in our own image. P1990174-1 Here’s a fun piece from Devin about a drone from Swiss scientists designed to collect “external DNA” from treetops. That means cruising around picking up evidence like skin, feathers and waste to determine what animals have been hanging out in the area. Devin here:

The drone looks a bit like a modernist light fixture, with a beautifully crafted wood frame and plastic shielding, and strips of adhesive tape or “humidified cotton” mounted on its lower surfaces. After being guided to a generally favorable position, it hovers above a branch to be sampled and monitors any movement like swaying or bouncing, synchronizing its approach. When it makes contact, it pushes with enough pressure to cause loose eDNA materials to transfer to the strips, but not so much that it pushes the branch out of the way. Essentially, it leans on the tree.

We have been working with Robotnik as our strategic partner and I am delighted to see the company join our group. We will benefit from 70 highly experienced robotics experts, especially in the areas of R&D and Software. This investment will support us in the development of further applications for CobiotX, the third generation of robots for humans. We look forward to working with the local management team around Roberto Guzmán and Rafael López who are leading the company since the very beginning. We are very confident to leverage synergies.”

If there’s one thing we’re passionate about here at Actuator HQ, it’s leveraging synergies. Lastly for the week is me trying to find a way to convince the T&E team to get me back to Pittsburgh for the week, to check out the nonprofit “Robotics Factory.” With backing from CMU and the Pittsburgh Robotics Network, it’s definitely a space worth watching in the coming year. Per the official site:

The Robotics Factory, an array of robotics programs led by Innovation Works and the Pittsburgh Robotics Network, is a part of the $63 million Build Back Better Regional Challenge grant awarded by the U.S. Economic Development Administration (EDA) to the Southwestern Pennsylvania New Economy Collaborative. The Robotics Factory will create, accelerate and scale robotics startups in the Pittsburgh region.

actuator-blue All right, back to work for me. I’ve got a bunch of stories in the works that will be popping up in future Actuators. Be the first to see ’em by signing up here. Building up and tearing down by Brian Heater originally published on TechCrunch