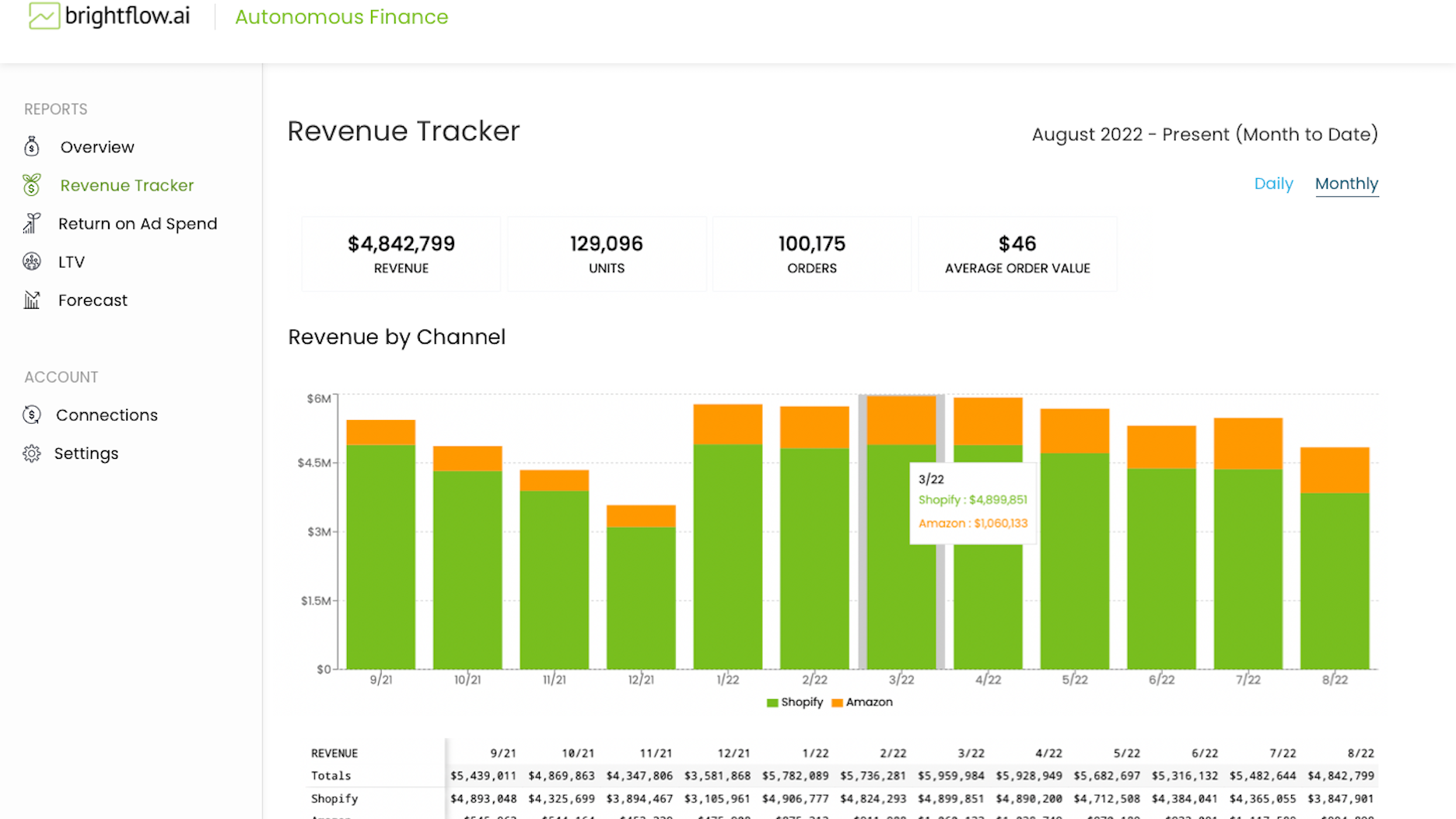 Missing Attachment Brightflow AI is injecting technology into this problem with its forecast and analysis tools so that small businesses can assess their cash flow and make data-driven decisions in real time. Brightflow also has a capital lending program to help during times of volatility or periods of high interest rate for traditional capital. The San Francisco–based company’s cash flow calculator grabs financial data from platforms like Shopify, Amazon, QuickBooks, Facebook and Google Ads, and then provides a real-time look at cash flow. If this sounds familiar, you are correct that Brightflow is not alone in helping companies sell more online. For example, Bainbridge Growth, which announced $4 million in seed funding this week, is also providing data and analytics aimed at e-commerce companies. However, Brightflow founder and CEO Robbie Bhathal told TechCrunch that the company differentiates itself by focusing on the automation of financial services and disseminating that information in a way that a business owner can understand. Before starting Brightflow in 2019, Bhathal was co-founder of hotel booking site Suiteness. He says being involved in growing that company was actually what led to him starting Brightflow with Jeffrey Priebe. “The personal pain points were around how fast your business grows and how hard it is to manage particularly around accounting and finance and forward state,” Bhathal said. “And also general access information. I don’t come from too much money so to access capital, you’re trying to find the best places, whether it’s through Y Combinator or accelerated equity capital markets.” The product seems to resonate with users. In the past year, Bhathal said the company grew 10x, finding customers over $60 million in growth capital. During that time, there were 1,200 customer connections on its platform and over 49,000 transactions syncing daily, sending billions of dollars of revenue flowing through the system. To continue that momentum, the company recently closed on $15 million in Series A dollars, led by Haymaker Ventures, that also included $100 million in debt financing from i80 Group. New investment gives Brightflow nearly $20 million in total funding to date. Plans for the capital infusion include hiring more employees to join the 40 already there and working on product development to provide additional growth opportunities for customers, Bhathal said. Mark Mullen, co-founder of Bonfire Ventures, the firm that invested in Brightflow’s seed stage, said the company’s initial customers were e-commerce, which made it easier to understand the pain points. “The potential that Robbie and his partner, Jeffrey, were able to articulate is a much grander vision that they are starting to execute on now,” Mullen told TechCrunch. “What they were trying to start we felt like was the democratization of finance. Customers have been able to take advantage of fintech opportunities through that lending and generating different revenue streams.” Next up, the company is focused on further automating its fundamentals and scale so that there is more access to forecasting, but also with a human-in-the-loop function providing expertise on top of the infrastructure, Bhathal said. Brightflow AI aims to spotlight small business cash flow by Christine Hall originally published on TechCrunch