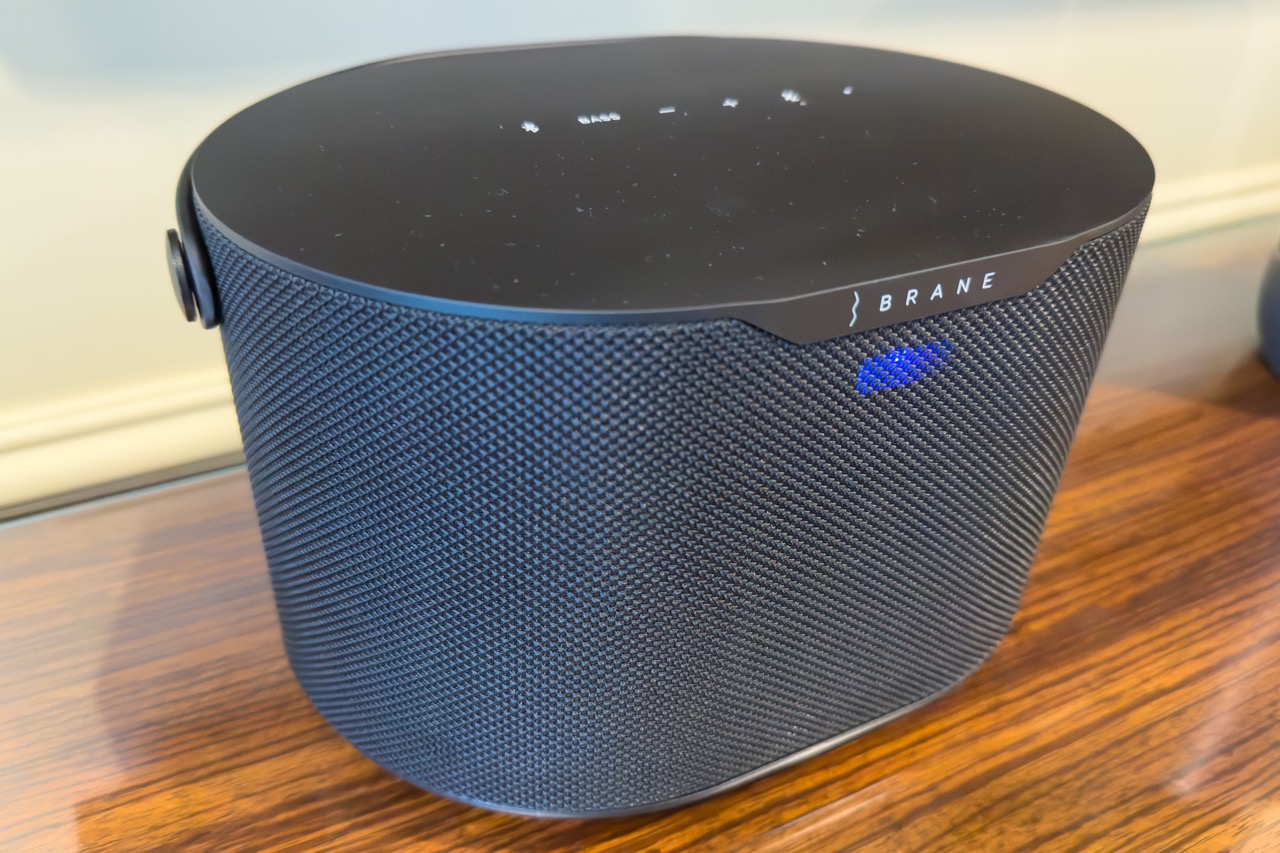 The company’s first product is the $700 Brane X, which is opening for pre-orders imminently. The big innovation is the company’s Repel-Attract Driver (RAD). It use a combination of moving and stationary magnets to create a force that is equal and opposite to the force caused by large air pressure changes within a speaker enclosure. The result is the ability to move a large amount of air (and therefore punch a lot of bass around), in a small package that the company claims consumes 10% of the power that a conventional-tech subwoofer would. “We developed a new way of making audio. Specifically, we have a novel subwoofer. That uses a technology we call “repel attract driver” or RAD. It uses magnetic forces to cancel out the air pressure forces that are inherent when you’re creating low subwoofer notes. Using traditional technology, there’s even a law – Hoffman’s law – that says, can’t have deep bass, an efficient speaker and have it be compact. As you make a subwoofer smaller, the air pressure gets higher and higher, and you’re drawing more and more power,” explains Joe Pinkerton, co-founder and CEO at Brane Audio, in an interview with TechCrunch. “By canceling that pressure force with a magnetic force, it stays in its container. That means all you have to overcome its own inertia. It is a factor of roughly 100 times more efficient in the subwoofer range. That enables us to make it a tenth of the size and draw a tenth of the power.” IMG_2581-Large You’ve already done the math, dear reader: Smaller, lighter, and less power-hungry equals interesting tech for portable speakers. And that’s exactly what the company built in the Brane X. It contains an 8-inch subwoofer in a portable speaker that can run on battery power for 12 hours. It also has all the other bells and whistles you’d expect from a high-end portable speaker: It has Alexa, Wi-Fi, Bluetooth, and can run Spotify. In addition to the aforementioned bass-pumper, it contains a pair of tweeters and a pair of mid-range speakers, so it retains its power to play stereo sound. The speaker is IP 5x rated, meaning it is more resistant to rain than your BBQ or pool party. In the suite where the tech was demoed, I found myself checking behind the sofa whether the company had hidden additional speakers: A huge amount of bass, plus a weirdly immersive soundscape coming from a box the size of a small toaster was a distinctly uncanny experience. I couldn’t locate the other speakers, and the team assured me that yes, it all really came from their little box. IMG_2577-Large Pinkerton started Active Power, a company in the energy space in the early 1990s that created huge 15,000-pound, magnetic-bearing flywheels for power storage. The precision needed to use a combination of static and dynamic magnets to keep these flywheels exactly balanced using an axial magnetic bearing meant developing an extremely precise feedback loop. A while after taking the company public in 2000, he started a Clean Energy Labs to start looking for other opportunities. One of the technologies the company looked into was using graphene to create more efficient switches. “As we were switching it at 5,000 times a second. We were like, ‘wow, that’s making a lot of sound for its size,’ and that was just a chip-level device,” Pinkerton laughs. From there, he wondered what would happen if they were trying to make sound on purpose. “We span Brane Audio out of Clean Energy Labs in 2015, and just said ‘hey, let’s make this membrane-based speaker.’ We worked on that for and we worked on that for several years and were going to launch something in 2020. Then COVID hit, and the factory shut down.” From there it was back to the drawing board — but Pinkerton wasn’t ready to let the technology rest quite yet. “Our experience is something a normal audio engineer would have no idea even existed. It took us years to figure out to perfect the technology,” Pinkerton says, describing the path to a final, launchable speaker. The speaker is big for a portable speaker; it’s more of a small boombox than the kind of speaker you can just lob in your hand luggage for a trip overseas. It seems like it’s better for a speaker you bring with you on a road trip, move from room to room in the house, or plonk down outside for a pool party. “This is sneak peek of the Brane X. We’re doing a full-blown launch at South by Southwest in Austin in mid-March,” Pinkerton concludes, and suggests that the company has speakers with its tech in smaller form factors and with more modest price points on the drawing board. ces-2023-banner-62 Brane X portable speaker packs a hell of a punch in a small package by Haje Jan Kamps originally published on TechCrunch