Apple Music is getting a new karaoke-like feature, Apple Sing 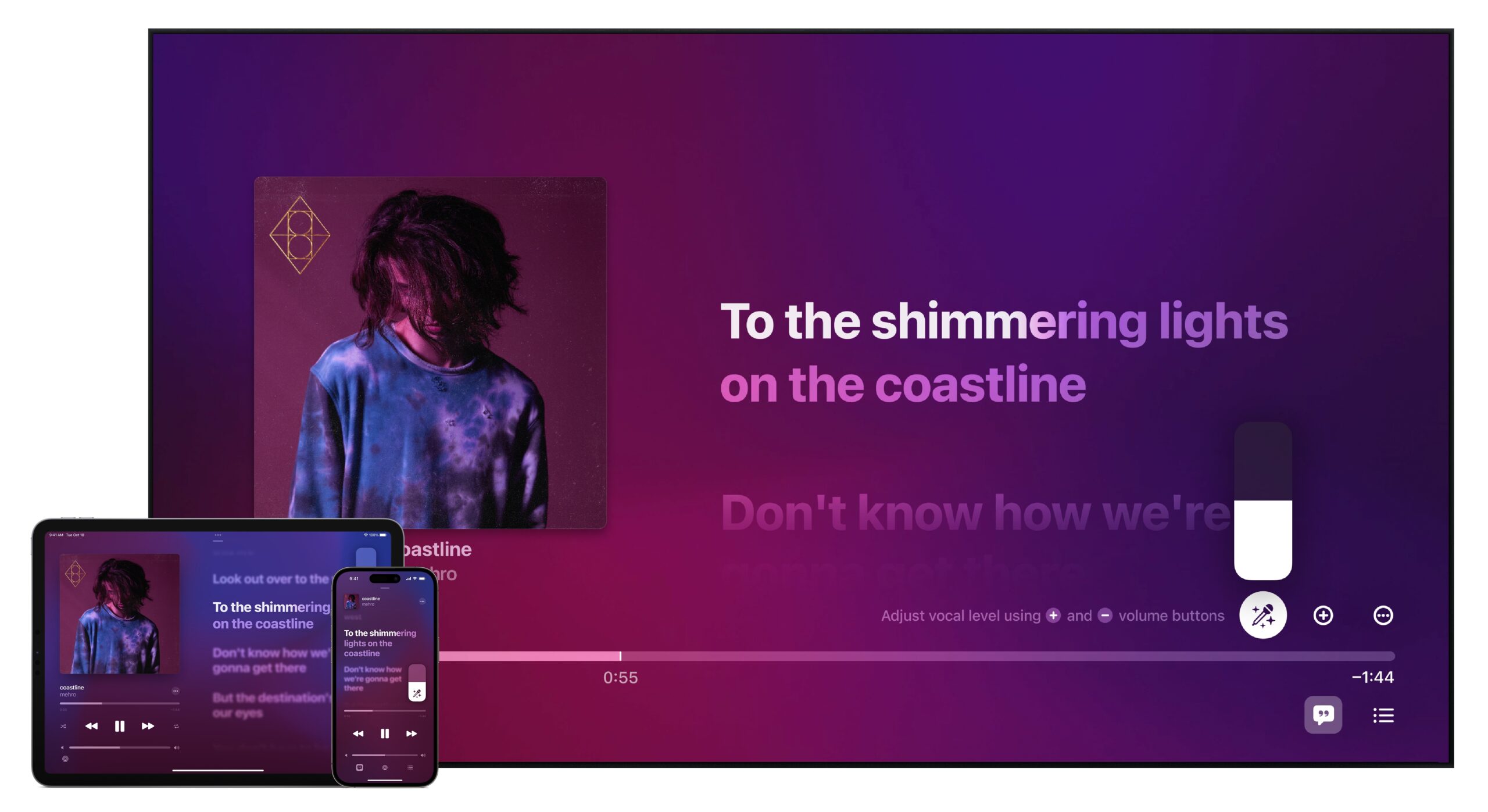 The feature won’t see users switching over to music tracks that already have the vocals removed, however. Instead, it’s relying on an on-device machine learning algorithm that processes the music in real-time, Apple says. The algorithm isolates the vocals from the rest of the song, allowing users to adjust their volume accordingly using a new slider button in the Apple Music app. The tech builds on Apple’s noise-cancellation expertise and other developments it’s made for FaceTime, the company said. The feature works on iPhone 11 and later, plus iPad and Apple TV. To use the feature, users will first enter the lyrics view, then tap on a microphone button to access the slider to adjust the vocals’ volume. At its lowest level, the feature doesn’t fully remove the vocals, we should note — but it’s good enough for an at-home karaoke party or playtime with the kids. Missing Attachment Apple Sing also builds upon Apple’s existing investment in real-time lyrics, which already allows users to view synced lyrics as they listen to music on the service. Now, those lyrics have been upgraded to better support Apple Sing. Instead of just animating the lyrics line-by-line, as before, the enhanced lyrics feature will now animate with each syllable for beat-by-beat sync. As with karaoke, this can help people when singing along, even if they aren’t as familiar with the song itself. In addition, the lyrics are being updated with two other new features to better support overlapping vocals and duets. With the new background vocals feature, Apple Music will for the first time break out the backup vocal from the primary line and animate those separately, as they’re sung. This would allow a group of people singing along to a song to take different parts, for example. These background lyrics are also shown in a smaller font to differentiate them from the lead vocals. Meanwhile, lyrics for duets will now indicate when there’s a vocalist change by switching the justification of the lyrics on the screen to make it easier to know when you should start or when it’s time for a duet partner to begin. There are other subtle enhancements to lyrics, like how they’ll now add a highlight and undulate when the artist is holding on a word or part of a word for a longer period to signal to those singing along to hold that note, too. Because there’s a process all the songs have to go through internally before being enabled for Apple Sing, the feature won’t be available across all of Apple Music’s catalog of 100 million songs. Instead, Apple says it will be available at launch across the top 80% of its most-played songs to start and will grow over time. To make these songs easier to find, Apple will launch 50 playlists that showcase this new feature in different ways, including thematic playlists, and playlists by decade and genre. These will be highlighted across Apple Music across the latest iPhone, iPad and Apple TV models. Missing Attachment While Apple Sing’s vocal control feature won’t be available on Android, the company noted that Android users will gain the other real-time lyrics enhancements. The new feature isn’t available immediately, but will launch “soon” to Apple beta testers. (In addition to developers, Apple now allows the public to beta test its software). It will then launch later this month for all customers. Apple didn’t offer an exact launch date, but one has to guess that it wants the feature available before all the holiday parties have wrapped, we’d imagine. Specifically, the feature works on the iPhone 11 and later or iPhone SE (3rd generation), the iPad Pro 11-inch (3rd generation and later), iPad Air (4th generation and later), iPad mini (6th generation), or iPad (9th generation and later), and the Apple TV 4K (3rd generation). Lyrics has been one of the areas where Apple had led its top rival Spotify in years past, as Spotify failed to get deals done to include lyrics in its product across global markets. That changed in November 2021, when Spotify finally rolled out real-time lyrics to its user base. Now Apple is jumping ahead once again, and with a feature it’s said has been a “labor of love” its team has worked on for the past couple of years. And, if it gains traction, Apple Sing could encourage people to make the jump or to subscribe for the first time. Spotify, meanwhile, was said to be working on a karaoke feature of its own, it has not become broadly available.   Apple Music is getting a new karaoke-like feature, Apple Sing by Sarah Perez originally published on TechCrunch