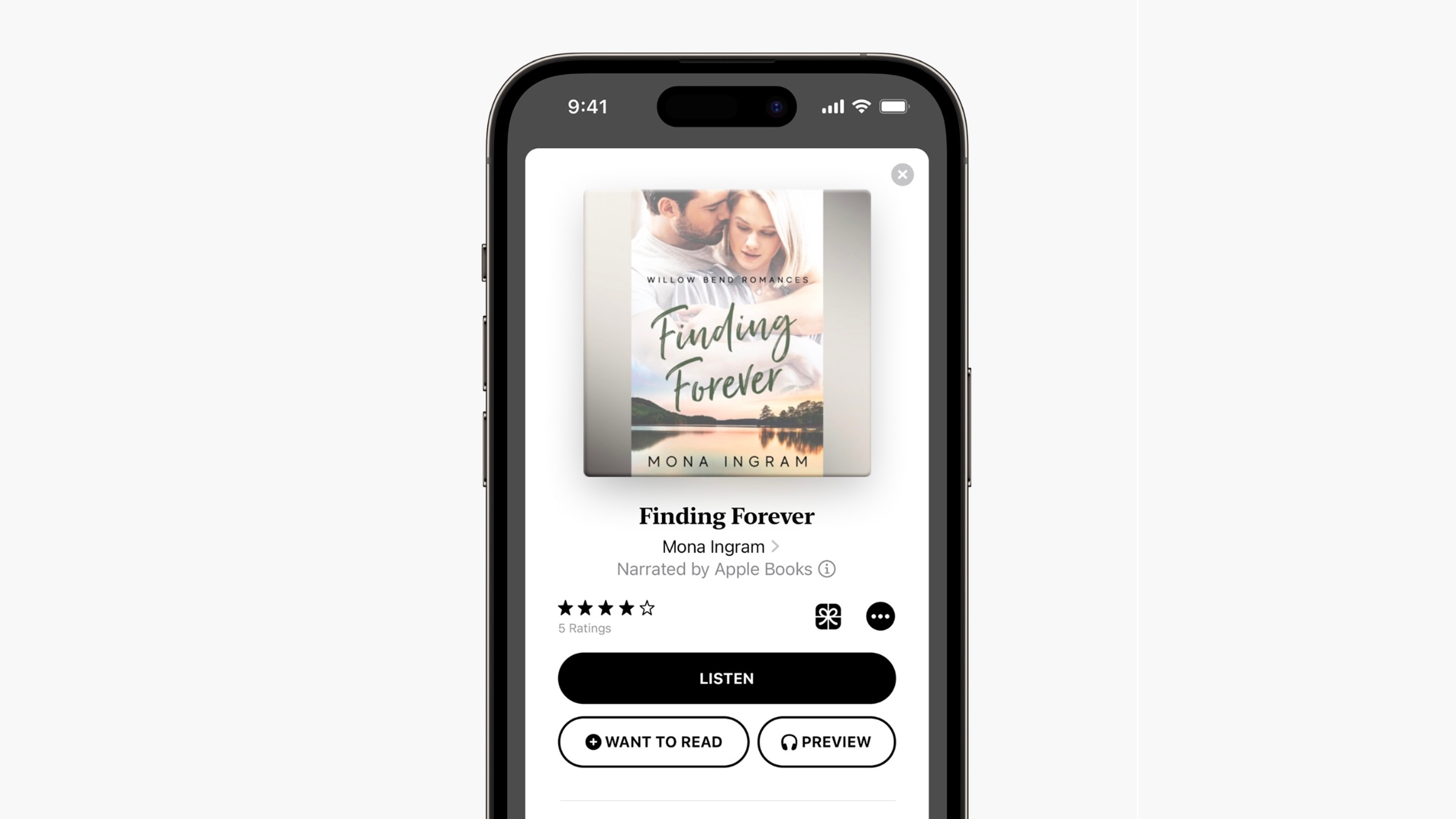 Currently, only select titles are narrated by Apple’s own AI-generated voices. Users will see “Apple Books” in the narrator section for these titles. Missing Attachment While Apple says the program is for independent authors, currently they have to sign up with partner publishing companies — Draft2Digital or Ingram CoreSource — to get their book narrated by Apple’s AI voices. Apple is already accepting submissions under the romance and fiction genres — with support for only literary, historical, and women’s fiction at the moment — through the partners mentioned above. Plus, it is starting its AI-powered voice narration work for nonfiction and self-development genres. Currently, Apple offers four voices under soprano and baritone categories: Madison and Jackson (romance and fiction); Helena and Mitchell (self-development and non-fiction). The company said that these voices are trained in specific genres, but Apple didn’t specify what training data it is using to tune them. “Apple Books digital narration brings together advanced speech synthesis technology with important work by teams of linguists, quality control specialists, and audio engineers to produce high-quality audiobooks from an ebook file. Apple Books has long been on the forefront of innovative speech technology and has now adapted it for long-form reading, working alongside publishers, authors, and narrators,” Apple said on its website. If you look at audiobook titles on the Apple Book store, they are often narrated by the author with other guests or voice artists pitching in at times. Apple’s AI-generation suit probably aims to remove any need for sitting down and recording the narration in a studio. But even with this process, results are not instant. The Cupertino-based company said that once an author submits a request, it takes “one to two months to process the book and conduct quality checks.” Apple specified that if there is not enough time for post-production checks, the title is published as soon as the processing is completed. However, the company didn’t provide any details on what might be the shortcomings of such a rushed process and how the final might sound. It’s not clear if authors are allowed to port their Apple AI-powered audiobooks to other platforms. We have asked Apple for a comment, and we will update the story if we hear back. A report from The Guardian noted that Apple wanted to release this feature last November. But it got delayed because of industry-wide layoffs and the Elon Musk-Twitter drama. Most platforms — apart from Audible — allow books that are narrated by AI-generated voices. However, Apple’s entry into the market might attract a lot of attention to platforms such as Matrix-backed Murf that creators to make AI-powered audiobooks. At the moment, there’s no detail about how much Apple is charging publishers (or authors) for the whole process of converting a book into an audiobook. As Apple is getting pushback from regulators about App Store fees, and it might have to allow alternative app stores and third-party payment options that might have an impact on its revenue. So when generative AI is having its moment, Apple is taking the first steps into making it a viable cash-generating option. Apple launches AI-powered book narrations by Ivan Mehta originally published on TechCrunch