Amazon’s Kindle Scribe reads well, but its writing could use some work 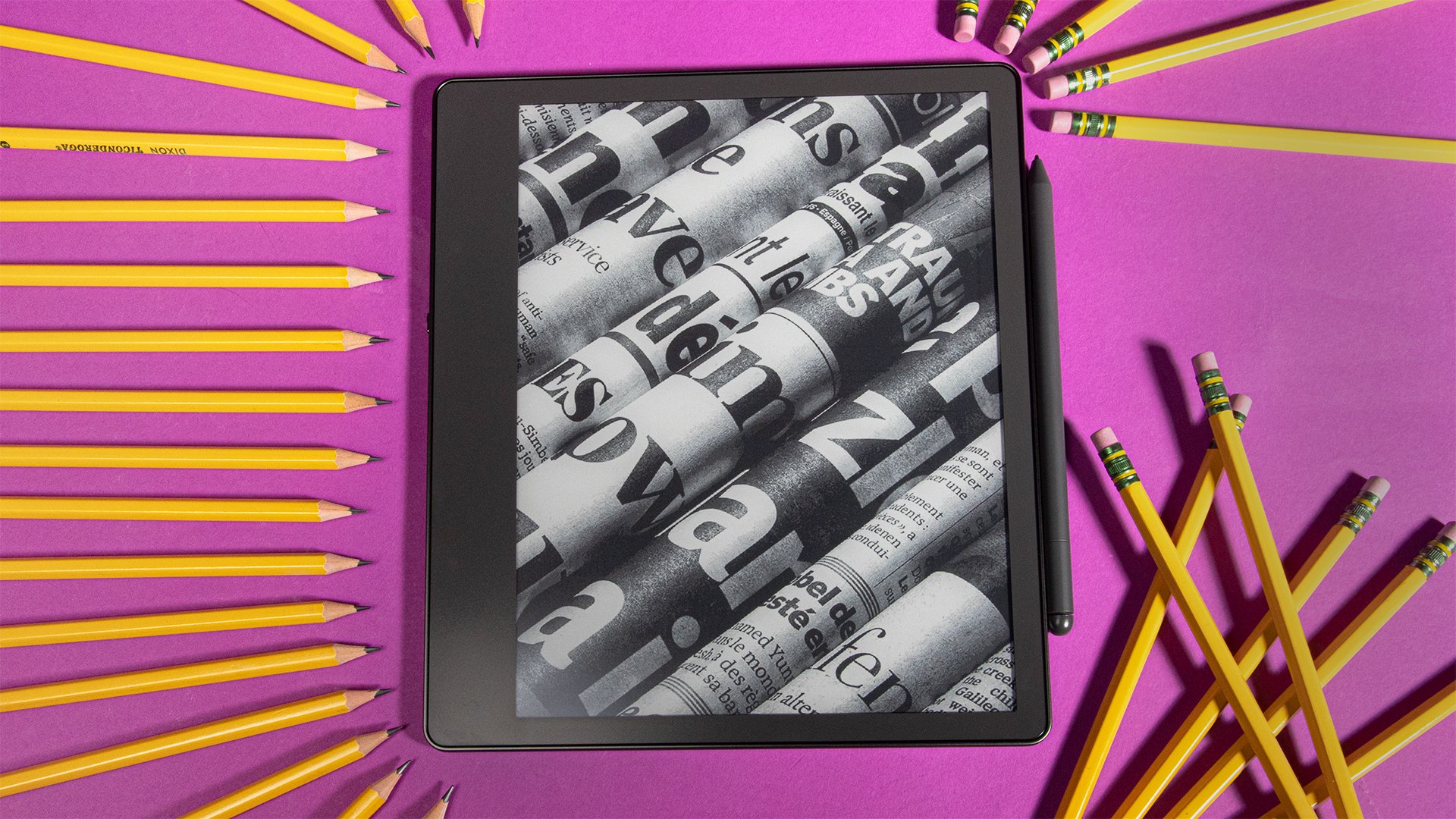 If you’ve ever found yourself needing to write down every last one of your thoughts while reading a book, the newest Kindle is for you.With the $340 Kindle Scribe, Amazon is doing what it can to accommodate people who’ve marked up the margins of a library book or two in their time. This gargantuan Kindle with its 10.2-inch display and included stylus is tailor-made for keeping notes, altering documents, or just plain doodling.  But is it actually good at those things? Well, it depends. The Kindle Scribe is a solid e-reader with a substantial display, but its stylus-based features are hit-and-miss due to a slow UI and lack of color. You can mark up a book to your heart’s content, but a conventional tablet like an iPad might be better for anyone with artistic sensibilities.

The biggest Kindle around

images-2.fill_.size_2000x1125.v1670618245 The newest Kindle is a substantive lad thanks to the aforementioned 10.2-inch paperwhite display, so it lacks color but has a built-in light for reading in the dark. It’s the size of a bonafide tablet, made even bigger by the large bezels around the display. At first, the Kindle Scribe is a bit of an odd-looking device because the bezel is really big on one side of the screen. This makes a lot more sense, however, when you actually use the device, as it gives you something to hold while you jot down your thoughts.And yes, the screen can rotate in any direction, so it’s friendly to all the left-handed homies in our lives, too.The side with the larger bezel also contains a power button and a USB-C port for charging. Like any other Kindle, the battery is rated to last for weeks at a time. In my usage, it barely dropped at all. You don’t need to charge the stylus, either. Speaking of which, the stylus attaches magnetically to the opposite side of the screen from the charging port. I’m a little torn on the Kindle Scribe as a pure e-reader (you know, the stated purpose of Kindles) because of its size. The screen being so large is great, especially for anyone with eyesight problems. Font sizes are adjustable, too. However, at 15.3 oz, it’s a tiny bit heavier than I’d like it to be. When held with two hands, it’s not a problem, but I could see it causing minor wrist strain for some people if they try to hold it with one hand for an extended period of time. images-1.fill_.size_2000x1125.v1670618245 In other words, it might be cumbersome to pull this bad boy out on public transit. Compared to last year’s $140, 6.8-inch Kindle Paperwhite, the Kindle Scribe isn’t nearly as compact or convenient. While Amazon’s signature paperwhite display is great for preserving battery life and reducing eye strain while reading, the lack of color is also a problem for a device that people can ostensibly use for doodling. Heck, even color-coding annotations on documents or books would be nice. Unfortunately, it doesn’t look like there’s a way to do that here.As for the rest of the specs, the only thing worth mentioning is the storage size options. Kindle Scribe comes in three configurations: 16GB, 32GB, and 64GB. The largest size balloons the price up to $420, putting it close to the $450 entry-level iPad.

images-4.fill_.size_2000x1125.v1670618245 Speaking of prices, there’s one slightly hidden fee with the Kindle Scribe. There are actually two pen options at purchase: Basic or premium. The basic pen is just a stylus, while the premium pen has a virtual eraser on the back and a customizable shortcut button on the side. Going with the premium pen adds an extra $30 onto the price tag.I should note that this seems to only apply to the 16GB model. The 32GB and 64GB Kindle Scribes just come with the premium pen. If you’re spending more for storage, you might as well get the better pen with it. Being able to turn the pen over and erase using the backside instead of tapping the on-screen eraser icon is worth it.Regardless of which pen you choose, using it is pretty straightforward. When reading a book, tap or drag to highlight a text passage, then tap “Note,” to leave a hand-written sticky note you can open or close at any time by tapping whatever you had highlighted. No more writing ugly, condensed notes in the margins. The same goes for Microsoft Word documents and PDFs, which can be easily imported onto the Kindle using the Send to Kindle web tool.images-5.fill_.size_2000x1125.v1670618245 The one added advantage of importing PDFs to the Kindle Scribe is that you can freely draw on them, a feature that doesn’t work with books or Word docs. This could be useful for leaving notes on work charts or even signing documents, though I’d point out that you can also do that using any rudimentary image program on a PC or Mac. Once you’re done leaving notes in a book or drawing on a PDF, you can export whatever you’ve done via email. Since you have to log into your Amazon account to use the device in the first place, you won’t even have to type in your email address. Snazzy! Also, to be clear, importing from a book doesn’t send the book itself to your email; it merely sends copies of every note you’ve made in the book.images-6.fill_.size_2000x1125.v1670618245 All of that is clearly useful for work or school projects (even if it’s something you can do on other devices, too), but I don’t feel the same way about the notebook feature. This is a way for you to free-hand draw or write on a variety of page templates (lined, blank, etc.). I suppose it could be used to take notes or doodle, but the former is easier to do in the Notes app on your phone and the latter is better done on a device with a color display.If you really like writing with your hands, don’t let me stop you. I just don’t think I’d ever use the notebook feature if I made Kindle Scribe part of my daily routine.

images-7.fill_.size_2000x1125.v1670618245 Ultimately, the biggest problem with the Kindle Scribe has nothing to do with its stylus implementation. While I don’t personally have much use for a giant Kindle with a hand-written annotation tool, someone out there does. That’s fine! What’s less fine is the device’s performance.The Kindle Scribe, like the 2021 Paperwhite, has a laggy, herky-jerky user interface that clashes with the “this is for professionals and/or students” vibe the device gives off. For a tiny little thing like the Paperwhite that’s exclusively an e-reader, that’s acceptable. For something that someone might actually want to use to increase their productivity, it’s less acceptable.Its screen doesn’t scroll, so going down the home screen looks choppy and ugly. Sometimes button presses don’t register right away. Trying to highlight a small part of a sentence can be a chore because what’s happening on the display isn’t always in sync with what your hand is doing. There are just lots of little quirks like this that make the Kindle Scribe less fun to use than it should be.I know nobody sees this as an iPad competitor, but it’s hard not to make the comparison. It’s shaped and sized like an iPad and offers productivity tools like a tablet, but the user experience feels cheap by comparison. Many of these problems are intrinsic to the Kindle experience, but considering the premium price tag on this device, I want better out of it.

images-8.fill_.size_2000x1125.v1670618245 Whether or not I’d recommend the Kindle Scribe has a lot to do with who you are and what you intend to do with it. Are you an avid reader who loves taking notes as you read? Then go for it. It’s not perfect at that thanks to a disappointing UI, but this device is built just for you. Take advantage of that.I’d also tell book-lovers with vision problems to give this a look thanks to the huge screen size and font size options. Overall, as an e-reader, the Kindle Scribe is quite good, even if I personally prefer something a bit smaller.  On the other hand, workers or students who regularly need to annotate documents are probably better off just finding a computer program or a real tablet that can do that instead. An iPad with an Apple Pencil will run you closer to $600 at the very least, but it’ll also be a device that can do a whole lot more than just read and write on books. There are plenty of good ideas in the Kindle Scribe, but a higher price point than other Kindles and some software problems keep it from being the best Kindle yet.